Sparkling waters are the latest in health chic, providing all the fizzy refreshment of a soft drink with none of those wicked calories. Today, Americans drink as much as 170 million gallons of sparkling water each year, and its popularity has surged to the point that TheGuardian dubbed it “little short of a religion among millennials.”

As with any health food trend, questions of its validly abound. Articles and social media posts have suggested that consuming carbonated beverages could lead to a myriad of ailments such as zapping bones of needed minerals, destroying tooth enamel, inflaming irritable bowel syndrome, promoting weight gain, and (of course) causing cancer.

But we needn’t rely on hearsay. There’s a fair amount of research to help us figure out whether these drinks are good or bad for our health. Turns out, the answer greatly depends on your bubbly beverage of choice. 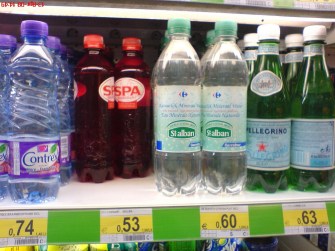 Calling it “sparkling water” doesn’t tell you much about what’s inside.

Carbonated water describes water with carbon dioxide dissolved into it. Carbon dioxide can be introduced through natural processes, or by artificially injecting the gas into water while it is under pressure. The addition of CO₂ gives these beverages their satisfying hiss-pop when opened and characteristic effervescence.

Here are some popular classifications of fizzy waters:

Seltzer water. In its simplest form, seltzer water is water with carbonation. That’s it. Seltzers may include natural flavors, but they do not contain additives like sugar or sodium.

Club soda. Club soda has more in common with seltzer than Coca-Cola. These drinks add ingredients such as sodium bicarbonate or potassium sulfate to carbonated water to elicit a minerally taste. They do not contain sugar. Good with scotch but won’t do much for red wine stains. (That’s an old wives’ tale.)

Tonic water. Tonic water, on the other hand, has more in common with soda than seltzer. Its ingredients include sugar, citric acid, preservatives, and quinine for flavoring. Interestingly, quinine was the world’s first anti-malarial drug and adds a property to tonic water that makes it glow under a blacklight. Cool party trick, but not for the health conscious.

Mineral water.The Food and Drug Administration defines mineral water as coming from an underground source with a minimum of 250 parts per million of total dissolved solids. These dissolved elements, such as calcium or magnesium, must come from the source and cannot be added later. Carbonation may be induced to make sparkling mineral water.

Like carbonated water, “sparkling water” is an umbrella term for waters that have undergone the carbonation process. While the two are interchangeable, you’re much more likely to find bottles of sparkling water on store shelves. Carbonated water just lacks that ballyhoo lyricism and, as such, has mostly been relegated to naming an ingredient rather than a standalone beverage—it’s the main ingredient in Pepsi.

Given its catchall nature, “sparkling water” covers an immense range of drinks. La Croix, for example, sells itself as a sparkling water but is a seltzer with natural flavors. Other beverages sporting the label, however, may contain additives like preservatives, sweeteners, food coloring, and even acids or juice concentrates for flavor.

Sparkle without the soda

Sparkling water’s noxious effects have been overplayed. Claims that carbonated beverages lead to osteoporosis and other bone diseases stem from a misunderstanding of the research. A study in the American Journal of Clinical Nutrition found that it was cola, not other carbonated beverages, that was associated with lowered bone mineral density in older women, not men.

Celeste Robb-Nicholson, M.D. and editor in chief of Harvard Women’s Health Watch, noted equivalent results in other studies. Cola’s caffeine was considered a potential culprit for the lower bone mineral density, but the studies cited a need for further research.

What about irritable bowel syndrome? Carbonated waters have been known to cause gastrointestinal distress in people who are sensitive to carbonation, but they are not a known cause of the syndrome. In fact, one study found that carbonated water can improve indigestion and ease constipation.

Artificial sweeteners are incredibly poor for your health. Studies of diet soft drinks have linked them to an increased risk of dementia, transforming gut bacteria, and stimulating appetite. An American Heart Association study even found that people “who drank a diet soda every day had a 61 percent higher risk of vascular events than those who reported no soda drinking.”

In fact, an article reviewed by Very Well Senior Medical Advisor Dr. Richard N. Fogoros noted that plain carbonated water is just as hydrating as regular water, and mineral waters with calcium and bicarbonate have been shown to improve hydration during exercise.

There is one criticism of sparkling water that holds true: It has the potential to damage your teeth.

Carbonic acid is a byproduct of the reaction between water and CO₂, meaning any carbonated water, even plain seltzer water, is acidic. Acidic liquids—that is, anything below a 7 on the pH scale—eat away at tooth enamel, opening one up to cavities and other dental nasties. Luckily for sparkle enthusiasts, carbonic acid is relatively weak.

The American Dental Association lists Birmingham, Alabama’s, municipal water as having a neutral pH level of 7.2, while sparkling mineral water Perrier has a pH of 5.25. For further comparison, a Starbucks medium roast has a pH of 5.11 and Simply orange juice 3.78. Beverages that incorporate the much more acidic citric acid are even worse. Coca-Cola Classic and Pepsi, for example, have pH levels of 2.37 and 2.39 respectively.

One study comparing the erosive potential of sparkling mineral water to soft drinks found the former nonthreatening by comparison.

Speaking on the subject, dentist Andrew Swiatowicz noted that the danger seltzer poses for your teeth depends a lot on your oral health history, how much acid and sugar is in your diet, and the amount of fluoride you receive from toothpaste, tap water, and mouth wash.

“For an average, healthy person, carbonated, sugar-free beverages are not going to be a main cavity-causing factor,” he told The Atlantic. “If you are at all concerned, you can always dilute the carbonated water with regular water, or even just swish with regular water after.” 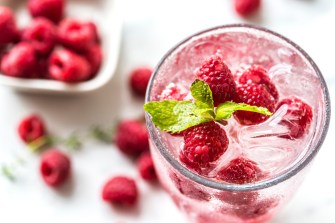 Sparkling water can be surprisingly good for you, assuming you pick the right one. The fresh raspberries and a mint sprig shouldn’t be skipped either.

If you want to bypass these dietary concerns, you could drink only flat, pH-balanced water. After all, you and every organism on Earth evolved to require this life-sustaining substance in some fashion. But this approach, while certainly healthy, feels bland and boring. There’s just something people find appealing about a crisp, bubbly drink.

Sure, there are risks, but these risks are no more severe than any other non-water drink and can be mitigated by making careful choices:

Not all sparkling waters are created equal, and the zeal for some of its more illustrious name brands can certainly annoy. But as an alternative to a soft drink or evening beer, sparkling water is a health trend that should stay.

Virtually all the statistical methods researchers commonly use assume potential mating partners decide who they will have children with based on a roll of the dice.
The Future

Bend it. Stretch it. Use it to conduct electricity.
Up Next
Communication

Will 2019 be the year of accountability?

We don’t have to tell you that business is complicated. You know. Maintaining productive employee and client relationships, mastering challenges and opportunities, and navigating the future are things that don’t […]