The football world was rocked recently when Denmark’s Christian Eriksen collapsed while suffering from cardiac arrest on the field during a European Championship match on June 12. The 29-year-old star has won the Danish Football Player of the year five times. Doctors are still baffled as to why an athlete in prime shape would experience sudden cardiac arrest.

While Eriksen’s case remains a mystery, a large team of researchers from the University of Maryland School of Medicine recently looked into the reasons a person with no apparent health problems dies from sudden cardiac death (SCD). Their study, published in JAMA Cardiology, found that roughly 20 percent of unexplained cases involve genetics.

The mystery of sudden cardiac death

SCDs are common, with between 180,000 to 450,000 occurring every year in the United States. While coronary heart disease is involved in between 50 to 75 percent of these cases, doctors are uncertain of the reasons in 30 to 40 percent of cases.

The team notes that most research on SCDs, such as in New Zealand, Denmark, and South Korea, tend to focus on homogenous populations of people under age 35. One study based in New York investigated a racially diverse cohort but included a number of infants. While these studies looked at genetic components of SCD, they write, “No systematic comparison of the genetics underlying cases of unexplained SCD between adult White and African American descendants has ever been conducted.”

The State of Maryland’s medical examiner’s office has been collecting data on SCDs for over two decades, which gave the team a rich collection of data to pull from — over 5,000 such cases. From that data set, the researchers looked at 683 African American and white adults (median age: 41). In total, the DNA of 413 patients who died from unexplained SCD was genetically sequenced. Thirty different cardiomyopathy genes and 38 arrhythmia genes were examined.

Clinical associate professor of medicine and corresponding author Aloke Finn explains the importance of rooting out the cause of SCDs: “Genetic screening isn’t routinely used in cardiology, and far too many patients still die suddenly from a heart condition without having any previously established risk factors. We need to do more for them.”

One surprising finding was the large number of the deceased that carried the genetic variant for hypertrophic cardiomyopathy (HCM), which causes the heart’s muscle tissue to be abnormally thick. This could explain why people with no apparent heart disease experience cardiac arrest seemingly out of nowhere. While HCM is a somewhat common heart disorder (with a prevalence as high as 0.2 percent), we’re only just now learning the role of genes in determining who suffers from a fatal attack. 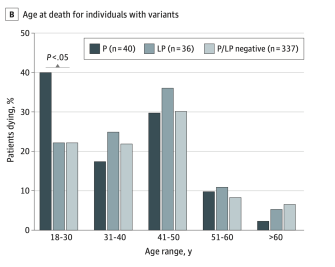 What is clear, however, is that those with particular genetic variants are likelier to die from unexplained SCD earlier in life than others who die from unexplained SCD.By identifying these genes, researchers hope this information could be used in future medical screenings. E. Albert Reece, Dean of the University of Maryland School of Medicine, believes this could save lives.

“This is a fascinating study that provides important new insights into devastating deaths due to unexplained cardiac abnormalities. It certainly makes the case for more research to address this urgent health need and save lives in the future.”

Just as human beings diversified so that people in Asia look different from people in Europe, so too did their microbiomes.
The Past

If you don’t mourn in North Korea, you risk being executed.
Up Next
Health

Finally, a scientific cure for the hiccups

A new device cured the hiccups 92 percent of the time in a recent study involving more than 200 participants.