A normal cell has 22 pairs of numbered chromosomes in addition to X and Y (or X and X) chromosomes. A total of 46 chromosomes. Sometimes, though, aneuploidy, an error in cell division, causes a “daughter” cell to wind up with an extra chromosome. When this happens in utero during meiosis, spontaneous miscarriage usually occurs — those who make it to term typically suffer from birth defects, including Downs syndrome. Mitotic aneuploidy, on the other hand, has been linked to all of the solid tumor types associated with cancer, but the relationship between aneuploidy and cancer isn’t clear. Now a new study attempting to understand the relationship is left with an odd double-sided answer:

The study involved introducing 14 different types of oncogenes — tumor-inducing cells — or combinations of oncogenes into genetically matched euploid (normal) cells and trisomic (with an additional chromosome) cells. (Among the oncogenes were human colorectal cancer cells.) This provided them with a test group of tumor-prone cells that were essentially the same except for the difference in the number of chromosomes. 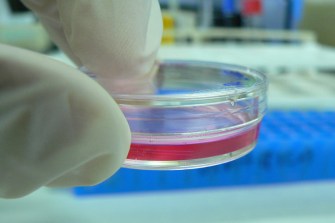 They found that as the trisomic cells grew in petri dishes, they did so at a much slower rate than the euploid cells, forming fewer colonies in soft agar. And when they were grafted into mice, the trisomes formed smaller tumors than the euploid cells. Only a few of the trisomic cell lines grew at anything similar to levels seen outside the lab, and none of them outgrew their euploid counterparts. The scientists were able to conclude that their results “suggest that whole-chromosome aneuploidy itself can function as a powerful tumor suppressor.”

That’s half the story. So why has an extra chromosome so often been found in tumor cells?

The researchers posit that while it looks like simple aneuploidy — one extra chromosome — suppresses tumor growth, it may be that more complex aneuploidy — multiple extra chromosomes — may cause tumors to grow more aggressively. They also leave the door open to the idea that rapid tumor growth could be the result of other unknown factors combining with aneuploid cells in unique ways.

The study also raises the possibility that tumors adapt, in a sense, to chemotherapy. The researchers saw how this could happen in their experiments: Some aneuploidal cells lost and gained chromosomes at the same time their growth increased. “We propose that aneuploidy + oncogene “sweet spots” exist in which the detrimental effects of aneuploidy are neutralized while a pro-proliferation phenotype [characteristic] is uncovered,” the report notes.

So, the good news is that the experiments with cells having just one extra chromosome showed that rather than causing cancer, they actually reduce tumor growth. The less good news is that aneuploid cells’ undeniable frequent presence in cancerous tumors remains unexplained, leaving the study’s authors with a tantalizing question about whether having a single extra chromosome may mean something very different than having more.

The new brain tumor treatment targets a cancer that kills 75% of patients within a year.
Hard Science

Grapes are ‘edible sunscreen’ according to a new study

A study says nature’s candy can be a valuable supplement to sunblock.
Up Next
Culture & Religion

Trump Can’t Save All the Jobs. Here’s a Plan to Put Our Workforce on a Sustainable Path

10 million prime age men have checked out of the workforce. Let’s improve their prospects.