Starting in October, the world goes through the annual tradition of monitoring, studying, analyzing, and bracing itself against the influenza virus as it spreads from East and Southeast Asia to Europe, then to North America, and finally to South America. This yearly tradition is such a challenge because the influenza virus mutates ever so slightly every year, rendering previous vaccines ineffective. That’s why every year you have to schlep down to your local pharmacy, get a shot in the arm, and feel a little woozy all day; you have to annually update your body’s library of foreign threats so it can recognize the new wave of invaders.

But some researchers have been hard at work trying to develop a universal influenza vaccine. As is the case with other diseases like tetanus, we could become vaccinated against influenza by taking a shot once every 10 years or so. Back in 2013, one CDC expert speculated that such a vaccine might be between 5 and 10 years away at the very earliest. While we’re not there yet, several breakthroughs have been made. Now, another study has identified a unique antibody that prevents viral cells from replicating and may serve as a potential candidate for a universal vaccine. 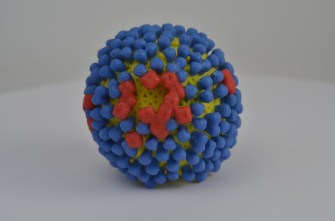 A 3D-printed model of a flu virus. The virus surface (yellow) is covered with proteins called hemagglutinin (blue) and neuraminidase (red), which enable the virus to enter and infect human cells.

At first we did not believe our results.

The influenza virus has two primary types of antigens — that is, foreign bodies that trigger an immune response — on its surface: hemagglutinin, which a virus uses to attach onto a host cell; and neuraminidase, which viruses use to detach from their host once they’ve replicated. These antigens are so important to understanding and treating infections from the major strain of influenza (influenza A) that flu strains tend to be named after the type of hemagglutinin and neuraminidase they have — for example, the “bird flu” you may have heard of is a subtype of the hemagglutinin 5, neuraminidase 1 flu strain, or H5N1. Typically, flu treatments only target a narrow range of hemagglutinin or neuraminidase, but as reported in the journal Science, researchers have recently discovered an antibody that targets a wide range of influenza strains’ neuraminidase.

“At first, we did not believe our results,” said co-senior author Florian Krammer.

Drugs that target neuraminidase already exist, such as Tamiflu, but they don’t work for every strain of influenza, and resistances to such drugs are developing as well. Krammer keeps a library of different types of influenza, including substrains of influenza A, influenza B, and others. Krammer had been sent a sample of three antibodies retrieved from the blood of a patient hospitalized with the H3N2 flu in 2017. When he tested the sample, at least one of the three antibodies targeted all known types of neuraminidase in flu viruses.

“Typically,” said Krammer, “anti-neuraminidase antibodies can be broad within a subtype, like H1N1, but an antibody with potent activity across subtypes was unheard of. … Especially the ability of the antibodies to cross between influenza A and influenza B viruses is just mind-boggling. It is amazing what the human immune system is capable of if presented with the right antigens.”

This was a particularly encouraging result since many existing drugs for treating the flu, like Tamiflu, need to be administered within 24 hours after infection, a period of time in which an infected individual might not exhibit any symptoms.

Upon further analysis, the research team discovered that this antibody functioned by attaching to a critical area in neuraminidase that remains fairly stable across different strains. Were this portion of the neuraminidase to change in any significant way, it wouldn’t be able detach from the host cell wall and spread to other cells, rendering the virus unable to replicate.

Of course, all of this needs to be taken with a grain of salt. While this antibody was found within a human subject, its actual efficacy in humans has not yet been tested. These results, as exciting as they are, don’t mean we should expect a universal flu vaccine in the immediate future, just that we’ve made some further steps towards that goal. At the very least, however, this study helped show that neuraminidase, which had received less attention than its complement, hemagglutinin, is a viable target for drugs. Not only that, but we now know what kinds of antibodies work best against it. It doesn’t seem too far-fetched to conceive of a future where catching the flu becomes a rarity, rather than a yearly threat.

To reap the benefits of digital technologies, we must contend with their addictive designs.
Hard Science

David Julius and Ardem Patapoutian were awarded the highest honor in medicine for their research into how human bodies make sense of and respond to the outside world.
Up Next
Hard Science

Who—or what—caused the first cause?

Archetypes of creation and the origin of all things.