Much has been said about the psychedelic experience and its rich and thrilling history. Luckily for us, some of the greatest pioneers who pushed forward into the choppy waters of the mind wrote it all down. Packed with governmental intrigue, freak-out trips and the loving grace of human community, this breed of psychedelia literature has it all.

There is an exhaustive amount of books pertaining to this subject and this list tries to cover at least a smidgen of these incredible visionaries.

Here are some of the best psychedelic books ever written. 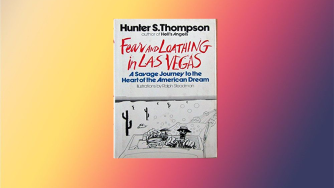 Fear and Loathing in Las Vegas

Largely popularized as a cult classic movie adaptation starring Johnny Depp and Benicio del Toro, Fear and Loathing in Las Vegas by Hunter S. Thompson jumpstarted a new book and writing genre critics called Gonzo journalism. Following in the footsteps of the beatnik poets before him, Thompson penned a roman á clef novel loosely based off an excessive drug-addled trip to Las Vegas.

Delving into the savage heart of the American Dream and casualties of a failed cultural revolution, Thompson’s satirical wit makes this book a staple of psychedelic literature. If you’re looking for universal consciousness truths laid out nicely in a row, hang on to your hats because you won’t get that in this book.

Thompson tears into reality with a dizzying array of hallucinatory scenes that wind you up and drop you down before you can figure out what’s really even happening anymore. Interspersed between the crazed prose are beautiful bits of wisdom lamenting in the death of an era. Nowhere is that more potently felt than in Thompson’s famed Wave Speech. By the end of the book it is clear that Thompson has left a warning sign for all those future freaks and seekers who naively believe that fundamental change in the world is just a tab away.

We are all wired into a survival trip now. No more of the speed that fueled that ’60s. That was the fatal flaw in Tim Leary’s trip. He crashed around America selling ‘consciousness expansion’ without ever giving a thought to the grim meat-hook realities that were lying in wait for all the people who took him seriously… All those pathetically eager acid freaks who thought they could buy Peace and Understanding for three bucks a hit.

But their loss and failure is ours too. What Leary took down with him was the central illusion of a whole life-style that he helped create… a generation of permanent cripples, failed seekers, who never understood the essential old-mystic fallacy of the Acid Culture: the desperate assumption that somebody… or at least some force — is tending the light at the end of the tunnel. 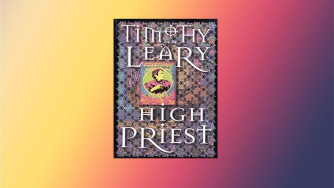 Timothy Leary was the great proselytizer of the psychedelic revolution. From Harvard psychologist square to guru-exile, he ran the gamut on what it meant to change your mind. High Priest is taken from the early chronicles of the 1960s and written right around the time Leary was getting acquainted to the many jail and prison cells he’d been forced into by the overzealous drug czar Nixon administration and company.

This is a central book for understanding both the rich cultural history of the time and the story of a great man. Famed poet, Allen Ginsberg once remarked that Timothy Leary was a hero of consciousness. The book pays its dues to the many prophetic mystics and scientists that came before him, while also touching on some contemporaries’ of the time as well, such as Aldous Huxley, Ram Dass and Ralph Metzner.

It’s a thrilling journey for both the reader and Leary himself. At one point he states:

I learned more about…my brain and its possibilities… and more about psychology in the five hours after taking these mushrooms than I had in the preceding 15 years of studying doing research in psychology.

Leary’s High Priest is a gateway drug to opening your mind and entering into one of the most important cultural time periods in the 20th century. 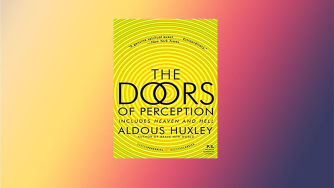 The Doors of Perception

Break on through to the other side. The philosophical essay and book by Aldous Huxley that inspired The Doors’ Jim Morrison. First published in 1954, the book covers Huxley’s experiences while taking mescaline. It’s a recollection book that’s often paired with his other essay on William Blake. The title comes from a phrase in Blake’s poem The Marriage of Heaven and Hell.

If the doors of perception were cleansed every thing would appear to man as it is, infinite. For man has closed himself up, till he sees all things thro’ narrow chinks of his cavern.

What’s even more surprising about this book was that Huxley wrote in a time that preceded the onslaught of the counterculture. But that comes as no surprise to if you’ve read Huxley’s Brave New World, which has been eerily prescient in predicting our current future. 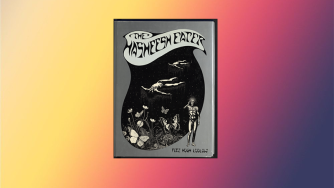 One hundred years before the beatniks, hippies and whatever you want to call our current breed of hedonistic meanderers, Fitz Hugh Ludlow’s tour de force novel, The Hasheesh Eater, influenced an entire generation in the ways of drug experimentation. Written in 1857, Ludlow’s book describes his experiences of altered states of consciousness while using the cannabis extract.

He dedicates many pages to wild flights of fancy from the visions he saw while ingesting the drug. Ludlow also takes the time to talk about the perils of addiction, which some critics believe was more related to his eventual problems with opium.

In a time many people don’t place with a bohemian surge of freedom and creativity, Ludlow helped to bring about a unique change of pace in mid 19th century American culture. With passages such as these:

I am borne aloft upon the glory of sound. I float in a trance among the burning choir of the seraphim. But, as I am melting through the purification of that sublime ecstasy in oneness with the Deity himself, one by one those pealing lyres faint away, and as the last throb dies down along the measureless ether, visionless arms swiftly as lightning carry me far into the profound, and set me down before another portal.

It was no surprise that so many wished to experience this. Not too long after the books publication, many companies began advertising “Hasheesh Candy” and private hashish clubs sprang up all over the country. 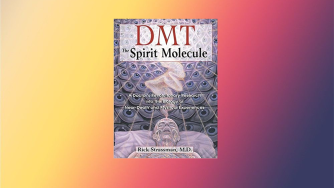 Dimethyltryptamine (DMT) is an incredibly powerful psychedelic compound that is also endogenously produced inside the human body. After a long period of draconian drug research suppression, Rick Strassman was able to conduct a number of biomedical tests on human subjects taking DMT. In recent years there has also been many new promising studies into this wondrous substance.

Strassman conducted a series of tests in the early 1990s at the University of New Mexico. Although Strassman has a scientific background, he’s very well versed in the cultural history of psychoactive drugs and never bores with the explanations of his subject’s experiences. The book opens up with an unexpected hilarious account of the Kafka maze of bureaucracy he has to go through just to acquire the drug legally.

Mixed with a dash of scientific expertise and spiritual proclamations, it’s a great book that, in a sense, is carrying the torch forward for future scientific exploration of these altered states. 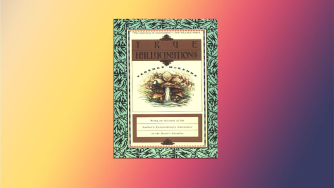 Terence McKenna recounts his insane adventures in the Amazon Basin in the search for a mythical hallucinogenic substance called oo-koo-hé. Whether or not this was the tall tale from some sophist raconteur or a glance at the truth to the inner cosmos, McKenna knows how to tell a story.

True Hallucinations is a wonderfully erudite story that’s mixed in with reams of esoteric history, metaphysical pondering and just outright hilarious situations. After their mother’s untimely death in 1971, Terrence and his brother Dennis and a coterie of seeker friends set out to the Amazon to experiment with DMT and a whole lot of psilocybin mushrooms.

McKenna truly believed that the fate of humanity and the species rested on returning to the roots of shamanism — the expanding of consciousness — and what he termed the Archaic revival. At one point in the book he says:

The Archaic Revival is a clarion call to recover our birthright however uncomfortable that may make us. It is a call to realize that life lived in the absence of the psychedelic experience upon which primordial shamanism is based is life trivialized, life denied, life enslaved to the ego and its fear of dissolution in the mysterious matrix of feeling that is all around us. It is in the Archaic Revival that our transcendence of the historical dilemma actually lies.

Nothing is off limits for McKenna in this whirlwind paean for the search on the true ontological nature of reality itself.

This is the story told by the father of the substance himself, organic chemist Albert Hoffman. Hoffman traces back LSD’s humble beginnings in his chemist’s lab that would go on to radically change the world, sparking hysteria and a new age.

The book follows Dr. Hoffman as he goes across Mexico searching for sacred plants and corresponding with other notable figures about his discoveries, which also included psilocybin. For the father of such far-out drugs, Dr. Hoffman grounded himself to a scientific reality with an added twist of pure mysticism. This was evident in some of his speech:

The wonder, the mystery of the divine ‹in the microcosm of the atom, in the macrocosm of the spiral nebula, in the seeds of plants, in the body and soul of people.

Hoffman focuses less on “trip reports” in this book and goes into the nitty gritty of the chemistry of LSD and other psychiatric drugs. However, the book is not bereft of some wonderful ravings and incredibly diverse citations of a mountain full of great scientists and philosophers.

Climate activists’ brand of iconoclasm is far removed from the Beeldenstorm that swept medieval Europe.
Sponsored

Between the instability of the real estate market and cryptocurrency fluctuations, everyone has been talking about bubbles. But what are they, really?
Up Next
Health