The first glimpse of Marvel’s latest movie, ‘Captain Marvel’, debuted today on Good Morning America, providing clues about both the future of the blockbuster company’s cinematic universe and the roles of women in Hollywood.

Carol Danvers might be a newcomer to the Marvel Cinematic Universe, but she’s a well-established name in the entertainment titan’s comic book universe. Created by writer Roy Thomas and artist Gene Colan, her origin traces back to 1968 in Marvel Super-Heroes #13. That issue details how Danvers, an American Air Force pilot, gains superhuman abilities like flight and energy projection after her DNA is mutated by an explosion involving a device made by the Kree alien race.

In the beginning of the film, Danvers already has her superpowers. She’s part of an elite military team called Starforce, whose commander is played by Jude Law, on the Kree planet of Hala. At some point, Danvers makes an interstellar journey back to earth, suffering a rough crash-landing through the roof of a Blockbuster store (the film is set in the 1990s, after all). She begins to piece together her earthly past, a quest that involves making sense out of the fragmentary memories that seem to keep emerging in her mind.

Danvers is soon joined by Nick Fury, played by Samuel L. Jackson. In an interview with Entertainment Weekly, Jackson described the two characters’ meeting as something like an origin story for Fury.

“This is a mind-changing, attitude-changing moment for him that leads him to become the person that we know,” Jackson said. “He [now] understands that there are these other things out there. He understands that they’re not all enemies, and we do need to find allies who have specific kinds of skills that humans don’t have. And trying to convince people above him is a difficult task because they haven’t seen it or experienced it.” 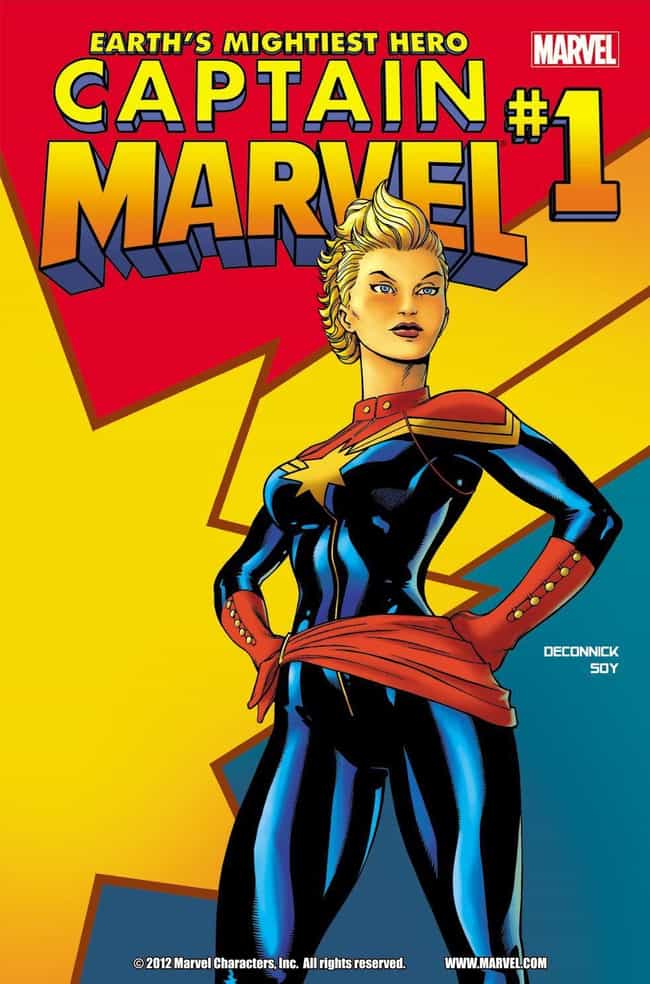 In a post-credits scene in Marvel’s ‘Infinity Wars’, Fury sends off a message to Danvers before he’s vaporized by Thanos. The suggestion? Captain Marvel might just be the hero to destroy the arch villain.

Superhero movies in the #MeToo era

Marvel is clearly aware its latest movie comes at a raw cultural moment. You can see it, for instance, toward the end of the trailer when title cards flash in big letters the words ‘DISCOVER’ ‘WHAT MAKES’ ‘A HERO’, with the middle letters ‘HER’ illuminating before ‘HERO’.

Captain Marvel is the first female superhero to receive her own stand-alone film in the Marvel Cinematic Universe. Larson, who’s led films such as Short Term 12 and Room, follows in the steps of other recent female Marvel superhero characters, including Scarlett Johansson as Black Widow and Elizabeth Olsen as Scarlet Witch.

Still, some have criticized the entertainment industry’s treatment of female characters in superhero movies, arguing that they are often not integral to storylines, exploited sexually and exist only in connection to male characters.

Critics also point to leaked emails written by former Marvel CEO Ike Perlmutter in 2014. One message appeared to suggest Perlmutter thought green-lighting more superhero movies with female leads was a bad idea, considering the past box-office failures of films like ‘Catwoman’ and ‘Supergirl’.

But those movies belonged to a different time. In the era of #MeToo, and in the wake of ‘Wonder Woman’, which has earned more than $820 million to date, a successful ‘Captain Marvel’ could help tip the scale in terms of female representation in superhero movies—both for the culture and for industry figures like Perlmutter whose primary concern, for better or worse, is box-office earnings.

Tags
captain marvelcinemaentertainmentfilmgenderhollywoodmarvelmoviessuperherowomen
In this article
captain marvelcinemaentertainmentfilmgenderhollywoodmarvelmoviessuperherowomen
Related
Health
Why are people sexually attracted to cartoons? Evolution.
Nikolaas Tinbergen’s concept of “supernormal stimulus” explains why humans are attracted to a heightened version of reality.
High Culture
The silent power of great movie soundtracks
Movie soundtracks don’t just help us recall the plot of a film; they also allow us to better understand its meaning.
The Past
The misguided history of female anatomy
From “mutilated males” to “wandering wombs,” dodgy science affects how we view the female body still today.
Diversity & Inclusion
Navigating the fifth trimester: Why working parents need better support
A textbook pregnancy consists of three trimesters. The baby develops at a relatively predictable rate during this time, from pomegranate seed to avocado to watermelon. And mom’s body adapts accordingly […]
The Big Think Interview
How to live an intellectual life
Being an intellectual is not really how it is depicted in popular culture.
▸
5 min
—
with
Zena Hitz
Up Next
Health
An aspirin a day keeps the heart attack away? Not so much.
It’s been de rigueur for at least 50 years that a daily, small dose of aspirin helps prevent heart attacks. However…