The Stanford marshmallow test, an experiment asking kids to hold off on eating one marshmallow for 15 minutes in exchange for two as a reward, was introduced in 1972 by psychologist Walter Mischel. The study checked in on the participants years later and noted that those who could delay their gratification a bit generally turned out better than those who could not.

The study has attracted attention since the day it was published. Attempts to recreate it have confirmed its basic findings, although some of those attempts suggest that how well the kids turn out is partly attributable to factors other than the ability to delay gratification.

While we debate how important the ability to wait for rewards is, science continues to find out which other animals are capable of it. A new variation on the experiment adds cuttlefish to that list.

The common cuttlefish is a small cephalopod notable for producing sepia ink and relative intelligence for an invertebrate. Studies have shown them to be capable of remembering important details from previous foraging experiences, and to adjust their foraging strategies in response to changing circumstances.

In a new study, published in The Proceedings of the Royal Society B, researchers demonstrated that the critters have mental capacities previously thought limited to vertebrates.

After determining that cuttlefish are willing to eat raw king prawns but prefer a live grass shrimp, the researchers trained them to associate certain symbols on see-through containers with a different level of accessibility. One symbol meant the cuttlefish could get into the box and eat the food inside right away, another meant there would be a delay before it opened, and the last indicated the container could not be opened.

The cephalopods were then trained to understand that upon entering one container, the food in the other would be removed. This training also introduced them to the idea of varying delay times for the boxes with the second symbol.

Two of the cuttlefish recruited for the study “dropped out,” at this point, but the remaining six—named Mica, Pinto, Demi, Franklin, Jebidiah, and Rogelio—all caught on to how things worked pretty quickly.

It was then that the actual experiment could begin. The cuttlefish were presented with two containers: one that could be opened immediately with a raw king prawn, and one that held a live grass shrimp that would only open after a delay. The subjects could always see both containers and had the ability to go to the immediate access option if they grew tired of waiting for the other. The poor control group was faced with a box that never opened and one they could get into right away.

In the end, the cuttlefish demonstrated that they would wait anywhere between 50 and 130 seconds for the better treat. This is the same length of time that some primates and birds have shown themselves to be able to wait for. 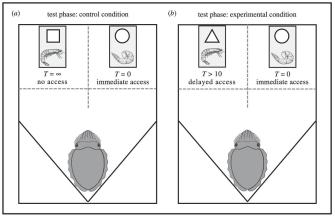 As you can probably guess, the ability to delay gratification as part of a plan is not the most common thing in the animal kingdom. While humans, apes, some birds, and dogs can do it, less intelligent animals can’t.

While it is reasonably simple to devise a hypothesis for why social humans, tool-making chimps, or hunting birds are able to delay gratification, the cuttlefish is neither social, a toolmaker, or is it hunting anything particularly intelligent. Why they evolved this capacity is up for debate.

Lead author Alexandra Schnell of the University of Cambridge discussed their speculations on the evolutionary advantage cuttlefish might get out of this skill with Eurekalert:

“Cuttlefish spend most of their time camouflaging, sitting and waiting, punctuated by brief periods of foraging. They break camouflage when they forage, so they are exposed to every predator in the ocean that wants to eat them. We speculate that delayed gratification may have evolved as a byproduct of this, so the cuttlefish can optimize foraging by waiting to choose better quality food.”

Given the unique evolutionary tree of the cuttlefish, its cognitive abilities are an example of convergent evolution, in which two unrelated animals, in this case primates and cuttlefish, evolve the same trait to solve similar problems. These findings could help shed light on the evolution of the cuttlefish and its relatives.

It should be noted that this study isn’t definitive; at the moment, we can’t make a useful comparison between the overall intelligence of the cuttlefish and the other animals that can or cannot pass some variation of the marshmallow test.

Despite this, the results are quite exciting and will likely influence future research into animal intelligence. If the common cuttlefish can pass the marshmallow test, what else can?

If we do find alien life, what kind will it be?

Three lines of evidence point to the idea of complex, multicellular alien life being a wild goose chase. But are we clever enough to know?