Homo sapiens have been on earth for 200,000 years — give or take a few ten-thousand-year stretches. Much of that time is shrouded in the fog of prehistory. What we do know has been pieced together by deciphering the fossil record through the principles of evolutionary theory. Yet new discoveries contain the potential to refashion that knowledge and lead scientists to new, previously unconsidered conclusions.

A set of 8-million-year-old teeth may have done just that. Researchers recently inspected the upper and lower jaw of an ancient European ape. Their conclusions suggest that humanity’s forebearers may have arisen in Europe before migrating to Africa, potentially upending a scientific consensus that has stood since Darwin’s day. 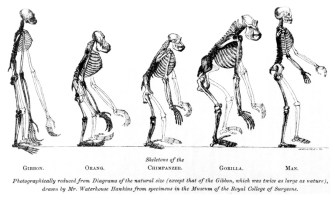 As reported in New Scientist, the 8- to 9-million-year-old hominin jaw bones were found at Nikiti, northern Greece, in the ’90s. Scientists originally pegged the chompers as belonging to a member of Ouranopithecus, an genus of extinct Eurasian ape.

David Begun, an anthropologist at the University of Toronto, and his team recently reexamined the jaw bones. They argue that the original identification was incorrect. Based on the fossil’s hominin-like canines and premolar roots, they identify that the ape belongs to a previously unknown proto-hominin.

The researchers hypothesize that these proto-hominins were the evolutionary ancestors of another European great ape Graecopithecus, which the same team tentatively identified as an early hominin in 2017. Graecopithecus lived in south-east Europe 7.2 million years ago. If the premise is correct, these hominins would have migrated to Africa 7 million years ago, after undergoing much of their evolutionary development in Europe.

Begun points out that south-east Europe was once occupied by the ancestors of animals like the giraffe and rhino, too. “It’s widely agreed that this was the found fauna of most of what we see in Africa today,” he told New Scientists. “If the antelopes and giraffes could get into Africa 7 million years ago, why not the apes?”

He recently outlined this idea at a conference of the American Association of Physical Anthropologists.

It’s worth noting that Begun has made similar hypotheses before. Writing for the Journal of Human Evolution in 2002, Begun and Elmar Heizmann of the Natural history Museum of Stuttgart discussed a great ape fossil found in Germany that they argued could be the ancestor (broadly speaking) of all living great apes and humans.

“Found in Germany 20 years ago, this specimen is about 16.5 million years old, some 1.5 million years older than similar species from East Africa,” Begun said in a statement then. “It suggests that the great ape and human lineage first appeared in Eurasia and not Africa.”

What is the next stage in human evolution?

Migrating out of Africa

In the Descent of Man, Charles Darwin proposed that hominins descended out of Africa. Considering the relatively few fossils available at the time, it is a testament to Darwin’s astuteness that his hypothesis remains the leading theory.

Since Darwin’s time, we have unearthed many more fossils and discovered new evidence in genetics. As such, our African-origin story has undergone many updates and revisions since 1871. Today, it has splintered into two theories: the “out of Africa” theory and the “multi-regional” theory.

The out of Africa theory suggests that the cradle of all humanity was Africa. Homo sapiens evolved exclusively and recently on that continent. At some point in prehistory, our ancestors migrated from Africa to Eurasia and replaced other subspecies of the genus Homo, such as Neanderthals. This is the dominant theory among scientists, and current evidence seems to support it best — though, say that in some circles and be prepared for a late-night debate that goes well past last call.

The multi-regional theory suggests that humans evolved in parallel across various regions. According to this model, the hominins Homo erectus left Africa to settle across Eurasia and (maybe) Australia. These disparate populations eventually evolved into modern humans thanks to a helping dollop of gene flow.

Of course, there are the broad strokes of very nuanced models, and we’re leaving a lot of discussion out. There is, for example, a debate as to whether African Homo erectus fossils should be considered alongside Asian ones or should be labeled as a different subspecies, Homo ergaster.

Proponents of the out-of-Africa model aren’t sure whether non-African humans descended from a single migration out of Africa or at least two major waves of migration followed by a lot of interbreeding.

Did we head east or south of Eden?

Not all anthropologists agree with Begun and his team’s conclusions. As noted by New Scientist, it is possible that the Nikiti ape is not related to hominins at all. It may have evolved similar features independently, developing teeth to eat similar foods or chew in a similar manner as early hominins.

Ultimately, Nikiti ape alone doesn’t offer enough evidence to upend the out of Africa model, which is supported by a more robust fossil record and DNA evidence. But additional evidence may be uncovered to lend further credence to Begun’s hypothesis or lead us to yet unconsidered ideas about humanity’s evolution.

Successful forgers are remembered as great conmen, not artists. This is strange, considering their forgeries fooled even the most seasoned critics.
Up Next
Think Again Podcasts

The philosophy of tragedy & the tragedy of philosophy – with Simon Critchley

Tragedy in art, from Ancient Greece to Breaking Bad, resists all our efforts to tie reality up in a neat bow, to draw some edifying lesson from it. Instead it confronts us with our own limitations, leaving us scrabbling in the rubble of certainty to figure out what’s next.