Geckos, Hemidactylus platyurus, are fascinating lizards who always seem to come up with unique ways of doing nearly impossible things. Things we wishwe could do. How about the unique microscopic hooking hairs they’ve developed in their foot pads that let them climb up walls? Here’s another: Geckos can run across the surface of water. They’re far too big to able to do this, and yet… scientists are now exploring this unique talent in hopes that we can, once more, learn something from these cool critters, maybe for use in robotics.

There are other animals that can scoot across the surface of water. Tiny water striders leverage the way in which water tension makes molecules stick together to keep themselves from sinking. Geckos’ larger cousins, basilisk lizards, sort of do it, too, keeping themselves at least partially above the water line by generating air pockets around their feet to step on, reducing drag as they move through water. But there’s a balance to be struck: Making such air pockets requires a lot of energy, and an animal therefore needs to be large enough to produce it. But geckos aren’t the right size for this feat. Biophysicist Jasmine Nirody tells Science News, “Geckos fall smack-dab in the middle. They shouldn’t really be able to do this at all.” After looking into this mystery, she can now explain how they’re getting away with it, as she does in a study just published in Current Biology. 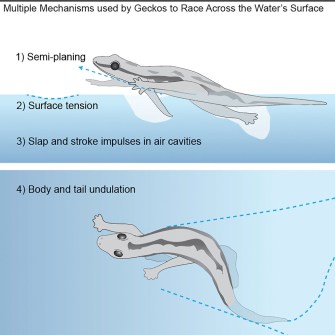 Nirody and her colleague Ardian Jusufi filmed eight flat-tailed house geckos traversing water tanks, mading videos of them that could be slowed down to see just exactly what’s going on.

The geckos, it turns out, are performing a kind of sloppy swimmers’ front crawl, slapping the water with all four feet while undulating their tails side to side. The slapping creates air pockets that allow about 70% of their bodies to remain up and out of the water, sparing them from having to push their entire bodies through resisting water. There’s apparently an element of surface tension assisting them in this, too, since when Nirodi added dish soap to their water, the geckos slowed down appreciably. (Soap lowers surface tension.)

The geckos’ tail movement propels the remaining 30% of their bodies forward in the water. Their superhydrophobic skin makes it even easier by reducing drag.

Chaotic-looking as it looks, the geckos’ system is remarkably effective at letting the lizards travel nearly a meter per second — that’s about 10.5 body lengths per second. It’s just about as fast as they can run on land.

Score one more for biomimicry

Animals have developed some surprising adaptations to their environments that would be considered genius had they been developed consciously. Biomimicry is one of the more exciting — and more understandable for us lay people — areas of scientific investigation. It’s led to, for example, Velcro from plant burs, octopus-inspired prosthetics, the Kingfisher-shaped bullet train, wind turbines based on humpback whales’ tubercle fins, and many more.

Geckos are not only engagingly quirky — right, GEICO? — but also full of cool traits that keep them skittering along the leading edge of science.

Some animals were even assigned their own lawyers.
Up Next
Think Again Podcasts

With the help of positive psychology and the happiness industry, many of us seem to be running in the exact opposite direction of happiness.