An international team of scientists has decoded the entire genome of the great white shark, an achievement that could help us better fight cancer and learn more about the fish’s extraordinary healing capabilities.

How could the great white shark – an apex predator that can reach 20 feet long and 7,000 pounds – provide humanity with potentially life-saving knowledge about cancer and other diseases? For one, the great white shark is a champion of evolution; its DNA has been fine-tuned by millions of years spent thriving in the world’s oceans with no natural predators. Mapping the great white’s genome could illuminate the keys to this evolutionary success.

The team, which published its findings in the Proceedings of the National Academy of Sciences, compared the great white’s genome to that of humans and other vertebrates. The researchers found patterns of DNA sequence changes that indicated molecular adaptation in genes related to maintaining genome stability, through functions including DNA damage response, DNA repair and DNA damage tolerance – all of which can protect against cancer.

This might explain why sharks rarely suffer from the disease.

“Not only were there a surprisingly high number of genome stability genes that contained these adaptive changes, but there was also an enrichment of several of these genes, highlighting the importance of this genetic fine-tuning in the white shark,” Mahmood Shivji, Ph.D., director of NSU’s Save Our Seas Foundation Shark Research Center and GHRI, said in a statement.

The researchers also found that the great white’s genome contains one of the highest proportions of transposons – also known as “jumping genes” – ever discovered among vertebrates.

“These LINEs are known to cause genome instability by creating double stranded breaks in DNA,” study co-author Michael Stanhope said in a statement. “It’s plausible that this proliferation of LINEs in the white shark genome could represent a strong selective agent for the evolution of efficient DNA repair mechanisms, and is reflected in the positive selection and enrichment of so many genome stability genes.” 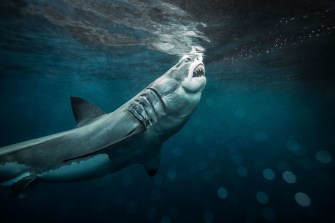 A great white shark near The Neptune Islands, South Australia, sticks its head out of the water, baring its teeth.

In addition to being able to preserve and repair genetic information, sharks are also known for their uncanny ability to recover from external injuries. For example, a 2015 study on blacktip reef sharks found they were able to heal wounds rapidly – sometimes within days – even when injuries were severe.

“We found positive selection and gene content enrichments involving several genes tied to some of the most fundamental pathways in wound healing, including in a key blood clotting gene,” Stanhope said. “These adaptations involving wound healing genes may underlie the vaunted ability of sharks to heal efficiently from even large wounds.”

Uncovering the ‘tip of the iceberg’ in shark genome research

The great white shark’s ability to protect its genome may well help humans someday do the same, but it’ll take years to incorporate these findings into approved treatments.

“Genome instability is a very important issue in many serious human diseases; now we find that nature has developed clever strategies to maintain the stability of genomes in these large-bodied, long-lived sharks,” said Shivji. “There’s still tons to be learned from these evolutionary marvels, including information that will potentially be useful to fight cancer and age-related diseases, and improve wound healing treatments in humans, as we uncover how these animals do it.”

Hannah Arendt on why some people are immune to fact-checking

Why do people buy into stories that are clearly lies? Hannah Arendt can help us understand.