The story of Cain and Abel imparts on us the evil of breaking the sacred social contract by murdering another human. Even today, it feels like we’re more likely to end at the hands of our fellow person than by natural causes. But I ask you to consider the meerkat.

Yes, the meerkat, according to a recent study, has a 20 percent chance of dying at the hands of its fellow meerkat. This study looked at over 1,000 mammal species, examining the rate of violence within their own species.

Ed Yong at The Atlantic organized the study’s most violent mammals into a neat little chart, and humans are nowhere to be seen. 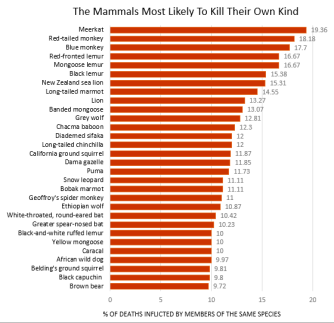 Humans are not on this list because we don’t kill each other very much. LIKE IT SAYS IN THE ARTICLE. https://t.co/YgB5tbuQiY

Various primates keep popping up on this list quite a bit, suggesting we share a legacy of lethality. Indeed, there may have been a point in human history where we would have made Earth’s top 30 most violent mammals. But society has changed us.

The study states that for humans living between 500 and 3,000 years ago, the rates of death by murder could have been as high as 15 percent and 30 percent. “However, the level of lethal violence has changed through human history and can be associated with changes in the socio-political organization of human populations,” the authors write. But the study also argues that while we may not take number one in killing our fellows, that’s not to say we wouldn’t take number one as the most lethal mammal on this planet.

However, Polly Wiessner, an anthropologist at the University of Utah, and others have had some trouble with the data in their analysis, citing the definition of “murder” as too broad. Wiessner told The Atlantic, "They have created a real soup of figures, throwing in individual conflicts with socially organized aggression, ritualized cannibalism, and more. The sources of data used for prehistoric violence are highly variable in reliability. When taken out of context, they are even more so."

The Bomber Mafia nearly changed the world—and you’ve likely never heard of them.
▸
10 min
—
with
Malcolm Gladwell
The Present

Autonomous killer robots may have already killed on the battlefield

A brief passage from a recent UN report describes what could be the first-known case of an autonomous weapon, powered by artificial intelligence, killing in the battlefield.
Neuropsych

Psychopath-ish: How “healthy” brains can look and function like those of psychopaths

A recent study used fMRI to compare the brains of psychopathic criminals with a group of 100 well-functioning individuals, finding striking similarities.
The Present

The cost of world peace? It’s much less than the price of war

The world’s 10 most affected countries are spending up to 59% of their GDP on the effects of violence.
Neuropsych

Do animals see the world the way we do?

We can’t ask them, so scientists have devised an experiment.
Up Next
Health

We never forget a face, but that’s because humans are evolutionary predisposed.