Most of our understanding of animal communication has come through observations of auditory and visual symbol, such as the guttural caws of a raven or the shifting color scheme on the skin of the chameleon. But the real Rosetta Stone for translating the language of nonhuman nature might be through chemical signals.

As scientists develop and utilize new technology that can detect on and decode these chemical dialects, we are just beginning to better understand what certain creatures are really saying to each other. Most recently, researchers discovered that lizards developed novel chemical communication signals when relocated to tiny island groups with no predators around. Specifically, male lizards began to rapidly produce a new chemical “come-hither” elixir to call on potential mates. 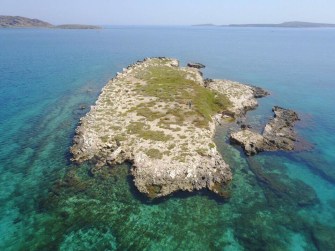 Agios Artemios was one of the islets that a lizard group was relocated to.

Researchers from Washington University in St. Louis relocated 12 female and eight male Aegean wall lizards from a single source lizard population in Greece to five tiny islands with no predators. Under these happy conditions, the lizard population proliferated and competed aggressively—evidenced by bite scars—for resources. Researchers tagged each individual lizard so that they could be identified and checked up on over the course of four years.

As the scientists made visits back to the lizard populations to note how they and their offspring were doing, they made a exciting discovery. On each of the islands, the male lizards had made new chemical cocktails different from the chemical secretions of the lizards in the original source population. The changes had happened rapidly, becoming evident to the scientists after just four generations.

Could this be evidence that male lizards spruce themselves up with new, au naturale “cologne” when in new ecological settings? The researchers think so, pointing out that having no predators around likely made all the difference.

“Signals to attract mates are often conspicuous to predators,” said Simon Baeckens, a postdoctoral fellow at the University of Antwerp in Belgium and co-author of the new paper, in a university news release. “As such, sexual signals present a compromise between attractiveness and avoidance of detection. However, on these islets, there is no constraint on the evolution of highly conspicuous and attractive signals.”

In other words, with no snakes or other predators to clue in on their prey’s potent chemical secretions, the male lizards could let loose on their love signals without worry.

“In the experimental islands, we found that the ‘signal richness’ of the lizard secretions is the highest—meaning that the number of different compounds that we could detect in the secretion is the highest,” Baeckens added.

Though the researchers are still working to decode the signals, they note that previous research suggests that this more elaborate signal may advertise high “male quality” and possibly immune function to both lure females and tell other males to scram.

“Lizards deposit their chemical messages encoded in secretions from specialized glands located on their inner thighs,” reported Talia Ogliore for Washington University. “The secretions are a waxy cocktail of lipid compounds that contains detailed information about the individual lizard that produced them.”

Lizards are able to collect those chemical messages from their environment by rapidly flickering out their slim, nimble tongues. They process those cues via a sensory organ in the roof of their mouths.

How Trees Secretly Talk to Each Other in the Forest | Decoder

Most chemical signals between animals fall out of the parameter of human perception, and are therefore more complex to examine. So when studying animal communicative signals, studies have typically prioritized sound and sight.

But chemical “language” is the oldest and most widely used communication mode in nonhuman nature. Life spanning from bacteria to plants to beavers all communicate through this medium. So research like this new paper on lizard love signals represents a valuable opportunity for deciphering ways that animals communicate and perceive the world around them.

“What we’ve discovered is that within species there is important variation in chemical signals depending on your context: Who’s trying to eat you, who wants to mate with you and who you’re trying to compete with,” said Colin Donihue, a postdoctoral fellow in biology in Arts & Sciences at Washington University in St. Louis and lead author of the new study.

Donihue also pointed out that nonhuman species have spent more than a billion years developing complex chemical languages. Only relatively recently have humans been able to decipher those methods of communication.

“With new technology though we’re increasingly able to detect and identify these chemical compounds and this is leading to exciting new possibilities for understanding how species interact and evolve,” Donihue told Big Think. “As these chemical assays become more common, cheaper, and easier to conduct, I think we’re going to find that there are chemical communicators in the plant and animal world that are every bit as exotic and impressive as the bright feathers or intricate birdsongs that are currently the subject of so much research.”

This is likely just the beginning for gaining understanding as to what nonhuman beings, like lizards, are saying to one another right under our noses.

This research was published on April 21 in the Journal of Animal Ecology.

Sex can be a death trap even for modern toad and frog species.
Up Next
Health

With the right technology, we can continue to “flatten the curve,” even as we venture out of our homes.