For anyone already terrified by ferocious sharks — few of them actually are, of course — the prehistoric megalodon, Otodus megalodon, goes several steps beyond a nightmare. Not much is known about the animal that roamed the seas from 23 million to about three million years ago. The most definitive fossils are triangular teeth that are larger than a human hand, really not much from which to extrapolate a complete picture of the shark. Even so, they suggest a gargantuan predator. Have you seen “The Meg“?

Now a new, open-source study from the University of Bristol and Swansea University published in the journal Scientific Reports purports to have figured the megalodon’s true dimensions, and they don’t disappoint. 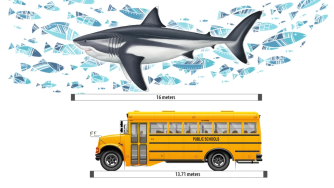 Previous estimates of the megalodon’s size have been based on the great white shark, which can exceed 20 feet in length — that’s about half the length of an average school bus. The idea has been, essentially, that since a great white’s tooth is about 2 inches long — the biggest one ever found is 2.5 inches — and most megalodon teeth seem to be in the neighborhood of six inches — the largest one found is 7.4 inches — then the megalodon must have been about three times as big as a great white. The suggestion is that if great whites can bite with two tonnes of pressure (4400 pounds), then the megalodon’s bite must have been significantly more powerful.

This may not be a completely fair comparison, however, according to one of the study’s authors, Catalina Pimiento of Swansea. She tells University of Bristol that “Megalodon is not a direct ancestor of the Great White but is equally related to other macropredatory sharks such as the Makos, Salmon shark and Porbeagle shark, as well as the Great white.” To arrive at their measurements the researchers, “pooled detailed measurements of all five to make predictions about Megalodon.”

To try and work out the proportions of the prehistoric shark based on this larger group of contemporary sharks, the researchers investigated how their bodies change as they mature. “Before we could do anything,” says co-author Mike Benton, “we had to test whether these five modern sharks changed proportions as they grew up. If, for example, they had been like humans, where babies have big heads and short legs, we would have had some difficulties in projecting the adult proportions for such a huge extinct shark.”

It turned out, surprisingly, that though these sharks get larger as they grow up, their body proportions don’t really change much. “This means we could simply take the growth curves of the five modern forms and project the overall shape as they get larger and larger — right up to a body length of 16 meters,” adds lead author Jack Cooper.

Cooper has always been, as he puts it, “mad about sharks.” He’s worked and dived, in a steel cage, with great whites. He enthuses, “It’s that sense of danger, but also that sharks are such beautiful and well-adapted animals that makes them so attractive to study.” 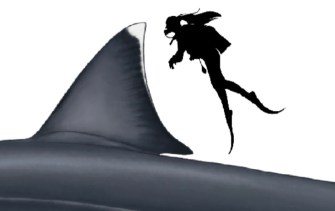 The study proposes the following approximate measurements for a full-grown megalodon:

A researcher explains a little-known niche within modern physics: animal collective behavior.
Up Next
Strange Maps

Two Williams pioneered geological mapping in Britain and the United States – but the world only remembers one.