Whales are carnivorous, although gigantic baleen whales feed on such tiny prey that it is hard to believe that they ever get enough food. Toothed whales dine on fish, squid, and octopi. (Fun fact: Orcas, also known as killer whales, are not really whales — they are gigantic, killer dolphins.)

Before moving into the sea, it is believed that whales were once terrestrial herbivores and somewhat deer-like. About 43 million years ago, say the authors of a new study, at least oneprotocetid — a semi-aquatic whale — was something else entirely. According to a fossil recently found in the Sahara desert, it was a four-legged, walking, swimming, Jurassic World-like nightmare.

Likely feeding on both land and in the sea, Phiomicetus anubis was fierce, with teeth and jaws powerful enough to tear apart its prey. The study says that it was about 10 feet long and weighed as much as 1,300 pounds, with a head reminiscent of a jackal’s. Thus, its discoverers had good reason to name it after Anubis, the Egyptian god of death.

The Sahara was not always a desert 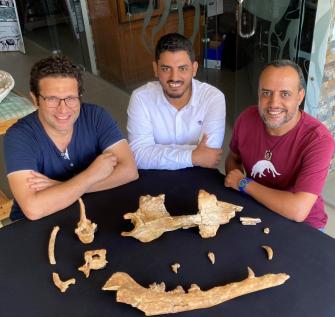 P. anubis was found in the Sahara desert, which was once under water. It is believed that such Protocetidae hail from the Eocene era in the Indo-Pakistan region. Its fossil was found in the Fayum Depression in the Egyptian Western Desert, an area that has been the site of numerous prehistoric whale discoveries, as well as discoveries of early fish, sharks, and land mammals.

The researchers did not find all of P. anubis, but they did find enough to deduce its characteristics based on its cranium, jaws, cervical and thoracic vertebrae, and its rib fragments.

Examination of the whale’s teeth suggests that it routinely digested prey that were too large to swallow whole and thus had to be torn apart. Among its likely fare: large fish, smaller cetaceans, turtles, and invertebrates such as nautiloids. As far as how it caught and killed its food, the study says:

“Phiomicetus may have used the same mechanism that modern crocodilians and sharks use in hunting large prey items (e.g. large fish or small cetaceans) by pulling them onto land or tearing them by seizing a part of the prey with powerful jaws then rolling and twisting the entire body.”

The researchers also assert that P. anubis was not above scavenging.

Since our arrival, humans have driven a seven-fold drop in the mass of wild land mammals.
The Past

Was our distant ancestor a biped or not – i.e., human or not human?
Health

Sex can be a death trap even for modern toad and frog species.
Up Next
Thinking

Do right and wrong depend on culture, or does morality transcend place and time?