If Arctic ice continues to melt at its projected rate, polar bears will go extinct by the end of the century according to a first-ever projected timeline.

An alarming new report on climate change is projecting that most of the polar bear population could reach extinction in under 100 years.

The University of Toronto published a study in Nature Climate Change last week that put a timeline on the beloved Arctic mammals’ crisis for the first time. It’s long been known that the ice habitats of polar bears — which most countries classify as an endangered species — have been rapidly melting, but now the “poster animal of climate change” has been given an extermination date by 2100.

Polar bears are dependent on sea ice for hunting seals, a primary component of their diet, and aren’t exactly built for swimming to catch their prey in the open water. As temperatures rise and sea ice continues to shrink it has become increasingly challenging for the carnivores to hunt for food. The species could be starved out within the next 80 years, save for a few high-Arctic subpopulations.

“Here, we establish the likely nature, timing and order of future demographic impacts by estimating the threshold numbers of days that polar bears can fast before cub recruitment and/or adult survival are impacted and decline rapidly,” the authors of the study said.

The study looked at 13 of the world’s 19 subpopulations of polar bears that account for 80 percent of the species’ total population. Researchers modeled the energy use of the polar bears to calculate the number of days the bears can fast before their reproductive abilities become impacted. They then mapped that onto the number of estimated iceless days that will be faced in the coming decades, determining that the amount of time the bears would be forced to fast surpassed the amount of time they were capable of fasting. In 20 years from now, some polar bears living in Canada will begin to face reproductive failure and in 40 years a majority of the global population will more than likely be affected.

“The dire predictions in our study result from polar bear’s dependence on sea ice and the projected rapid loss of that ice due to human-driven climate change,” Marika Holland, co-author of the paper told TIME.

While the scientists noted that moderate cuts in emissions could potentially extend the bears’ estimated life-expectancy for a bit, it won’t be able to save some species populations from extinction by the end of the century.

“Land-based feeding is unlikely to occur at scales that shift the timelines for recruitment and survival declines by more than a few years, because foods that meet the energy demands of polar bears are largely unavailable on land,” the study said, pointing out that some polar bear populations are already feeling the impact.

Of course, as the International Union for Conservation of Nature has cited, climate change is the main cause of the population’s suffering and decline.

According to the World Meteorological Organization, the Arctic is likely to have warmed more than double the amount of the global average this year compared to pre-industrial temperatures. Since the 1970s, satellites have shown sea ice melting by 13 percent per decade. If greenhouse gas emissions stay on their current trajectory, the only polar bears that will be left by the end of the century will likely be those living in the Queen Elizabeth Islands in Canada’s Arctic Archipelago.

Keeping tabs on polar bears, the largest land-dwelling carnivore on earth, is how scientists keep their finger on the pulse of the health of Arctic populations at-large. Their loss, as Holland told TIME, “would reverberate throughout the ecosystem.”

But the bears won’t go down without a fight for their survival. As Arctic temperatures rise, melting the species’ normal hunting grounds, the bears may begin to move toward land to find food. For example, in 2019 authorities in Russia’s remote arctic region declared a state of emergency as a mob of starving polar bears charged into villages. 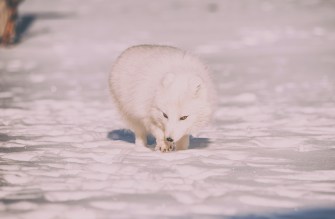 Arctic foxes are another species endangered as their habitats and diets are threatened by melting sea ice due to greenhouse gas emissions. Photo by Jonatan Pie on Unsplash

Polar bears have faced extermination in the past. In 1965, scientists were worried that commercial polar bear hunting would cause the species to go extinct. A 1973 worldwide ban on hunting led to a resurgence in bear population, yet the melting sea ice that now threatens the lives of the estimated 26,000 that live on earth today is a much more complex issue to solve. While the species’ future looks grim, the study does point out that decreasing fossil fuel burning may reduce Arctic sea ice loss.

If there is a sliver of hope left for the polar bears and other Arctic species endangered by melting Arctic ice, it rests on rapid and radical human action against fossil fuel emissions.

EV charging stations are the most widespread alternative to gas and diesel pumps. Each alternative has its own hotspots and “deserts.”
Up Next
The Past

Mexican cave contains signs of human visitors from 30,000 years ago

Archaeologists suggest this may have been the Americas’ “oldest hotel.”