SARS-CoV-2, the novel coronavirus behind COVID-19, has proven to be a dangerously crafty opportunist that in many ways continues to baffle doctors. As of this writing, the official worldwide tally of humans who have died from it stands at nearly 820,000. As if that’s not horrifying enough, a new study from University of California Davis finds that many other species share the disease’s primary receptor. The list includes mammals, amphibians, reptiles, birds, and fish. Already at-risk old world primates and apes are among their number.

The study is published in Proceedings of the National Academy of Sciences. 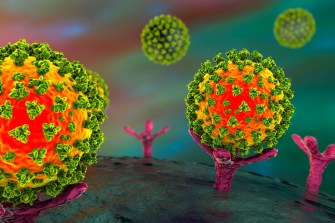 SARS-CoV-2’s main point of entry into our systems, its main cellular receptor, is an angiotensin converting enzyme-2 known as ACE2. There are many types of cells and tissues in humans that contain ACE2, including the epithelial cells found in the mouth, nose, and lungs. SARS-CoV-2 binds to 25 ACE2 amino acids to get into our cells.

The researchers investigated the presence of these amino acids in other organisms on the assumption that their presence would provide SARS-CoV-2 entry to their cells as they do in ours. Says first author of the study Joana Dama of UC Davis, “Animals with all 25 amino acid residues matching the human protein are predicted to be at the highest risk for contracting SARS-CoV-2 via ACE2.”

The precise mechanism by which SARS-CoV-2 infections occur and lead to COVID-19 is still under exploration. Nonetheless, the study operates on the principle that more of the 25 amino acids an animal has, the higher its risk of infection. “The risk is predicted to decrease the more the species’ ACE2 binding residues differ from humans,” says Dama. 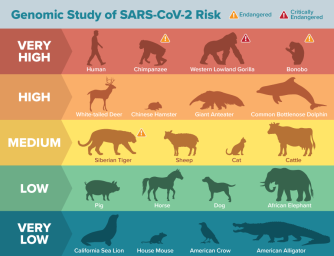 Their analysis leads Dama and her co-authors to the conclusion that about 40 percent of the species at risk of SARS-CoV-2 infection are on the International Union for Conservation of Nature’s “threatened” list.

Sumatran orangutans, Northern white-cheeked gibbons, and the Western lowland gorillas are all critically endangered and are vulnerable to infection. Some marine animals are also at high risk, including bottlenose dolphins and gray whales.

The study asserts that many animals most likely to live among humans are apparently at low risk, including cats, dogs, cattle, sheep, horses, and pigs. Chinese hamsters carry a high risk.

It’s worth noting, however, that there are cases on record of SARS-CoV-2 infections in cats and dogs. Hamsters, too. Less likely house pets like lions, tigers, and mink have also been infected.

Bats, the presumed source of SARS-CoV-2, are found by the study to be at very low risk of infection due to a lack of ACE2 receptors. Other experimental data lines up with the study’s finding, which suggests that spread of SARS-CoV-2 from bats is likely to have involved intermediate hosts en route to infecting humans.

The authors have made available for download the full list of animals its authors find may be susceptible to SARS-CoV-2 infection.

Lead author Harris Lewin explains the importance of the research:

“The data provide an important starting point for identifying vulnerable and threatened animal populations at risk of SARS-CoV-2 infection. We hope it inspires practices that protect both animal and human health during the pandemic.”

The study finds the same 40 percent of animals may also be especially likely to encounter the infection through human contact. The main locus of such interaction cited by the study is zoos. (Both the National Zoo and the San Diego Zoo contributed genetic material to the researchers for the study.)

Co-author Klaus-Peter Koepfli of the Smithsonian-Mason School of Conservation explains that zoo personnel already guard against such transmissions, saying, “Zoonotic diseases and how to prevent human to animal transmission is not a new challenge to zoos and animal care professionals.” The study makes keeping animals and humans apart at zoos more urgent than ever, though, and “this new information allows us to focus our efforts and plan accordingly to keep animals and humans safe.”

Some animals were even assigned their own lawyers.
Up Next
Starts With A Bang

How Physics Erases The Beginning Of The Universe

The Big Bang started it all. And then we realized there was more.Of all the questions humanity has ever pondered, perhaps the most profound is, “where did all of this come […]