Is there a specific location on Earth where humans like us originated? A new study pinpoints an area called the Makgadikgadi-Okavango wetland, shared by the modern-day countries of Botswana, Namibia and Zimbabwe in southern Africa as the birthplace of modern humans (Homo sapiens sapiens) about 200,000 years ago.

Scientists from the Garvan Institute of Medical Research discovered that the earliest ancestors of humans appeared in that area and lived there for about 70 thousand years. Eventually, they were forced to expand their domain by the climate changes in Africa.

The study lead Professor Vanessa Hayes from the Garvan Institute of Medical Research, who is also associated with the University of Sydney and the University of Pretoria, highlighted the significance of their find:

“It has been clear for some time that anatomically modern humans appeared in Africa roughly 200 thousand years ago,” said Hayes. “What has been long debated is the exact location of this emergence and subsequent dispersal of our earliest ancestors.”

For their study, the scientists focused on examining the mitochondrial DNA of modern-day residents of the area. Hayes explained that “Mitochondrial DNA acts like a time capsule of our ancestral mothers, accumulating changes slowly over generations.” This fact allowed the researchers to compare the DNA code (or mitogenome) of different people to figure out how closely related they are.

The scientists were able to use collected blood samples to put together a much improved catalogue of the mitogenomes of early humans.

The study’s first author Dr. Eva Chan from the Garvan Institute of Medical Research, who led the phylogenetic analyses, expanded on their methodology:

“We merged 198 new, rare mitogenomes to the current database of modern human’s earliest known population, the L0 lineage,” said Chan, adding “This allowed us to refine the evolutionary tree of our earliest ancestral branches better than ever before.” 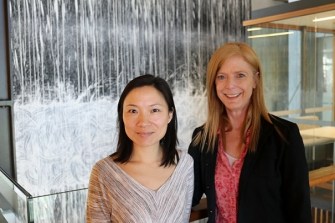 The researchers looked at the L0 lineage timeline in combination with distributions of various sublineages based on language, culture and geography. What they found is that the maternal lineage of humanity emerged in what they dubbed a “homeland’ area south of the Greater Zambezi River Basin region. This “homeland” includes all of northern Botswana stretching into Namibia to the west and Zimbabwe to the east.

Why was this area so perfect for humans to develop? According to research by the geologist Andy Moore of Rhodes University, that area once contained Lake Makgadikgadi – Africa’s largest-ever lake system. Once the lake started to drain due to shifts in the tectonic plates underneath, it left behind a fertile wetland, which was favorable for sustaining life.

The ecosystem was home to the early humans for 70K years until about 130 to 110 thousand years ago, when people started venturing out northeast and southwest from the area, while a group stayed in the area (with their descendants still found there today).

Why did many people leave the “homeland,” which today is actually one of the largest salt flats in the world? Climate change simulations from the study’s co-corresponding author Professor Axel Timmermann, Director of the IBS Center for Climate Physics at Pusan National University, point to shifts in rainfall which created “green, vegetated corridors” leading out of the area. These allowed the human ancestors to leave the homeland and look for greener pastures elsewhere.

Not everyone is on board with the scientists’ findings. Mark Thomas, an evolutionary geneticist at the University College London, said in an email to National Geographic that “The inferences from the mtDNA data are fundamentally flawed.” He also called the study “storytelling.”

But others, like University of Hawaii at Manoa geneticist Rebecca Cann, who was a reviewer of the study and has carried out her own pioneering work on mitochondrial DNA, supports the study, saying while the study is “not perfect”, it will move the science along and “stimulate a lot of new studies.”

Check out the new study “Human origins in a southern African palaeo-wetland and first migrations” published in Nature.

Why we love big, blood-curdling screams

Among the variety of human screams, it is screams of terror that stand out most vividly.