In 1996, Dutch photographer Christo Baars was looking through the images he had captured from a recent trip to northeastern Tasmania. His subject was the famously scrappy Tasmanian devil. But the devil in his pictures looked to be in bad shape, and not just because of the scars devils often accumulate when fighting one another. They had bulbous growths covering their faces.

Baars showed his photographs to a wildlife officer in Tasmanian Parks and Wildlife. This marked the beginning of humanity’s awareness of the strange disease that had begun to inflict the Tasmanian devils, one that would ultimately cut their population down by 90 percent. Years later in 2007, it was predicted that the entire species would be extinct within 35 years.

This was bad news for Tasmania as a whole. Devils are what’s known as a keystone species, a species with outsized importance on the local ecosystem. Like many islands, Tasmania possesses exceptionally unique flora and fauna, and its ecosystem is particularly sensitive. So, it was crucial to preserve the devil population, but the unique nature of the disease made this a challenging task.

Devil facial tumor disease, or DFTD, is an exceedingly common in the devil population, but it’s actually an incredibly rare form of cancer. Specifically, DFTD is a transmissible cancer. Almost all cancers arise from within as a result of a cellular mutation, but DFTD comes from without, a kind of parasitic cancer.

Transmissible cancers are known to occur in only a handful of other animals, notably dogs, Syrian hamsters, and soft-shell clams. In devils, the cancer is spread through bites, a particularly efficient means of transmission for this species. What’s more, when researchers examined cancerous cells from different devils, the cancers were genetically identical, suggesting that the cancer started with one individual and then spread from devil to devil. In a sense, it’s less accurate to describe Tasmanian devils as each having their own cancer; instead, all infected devils have the same cancer.

Another lethal aspect of DFTD has to do with the small size of the Tasmanian ecosystem. Without much room for their population to grow and become diverse, Tasmanian devils are all quite similar genetically. As such, when the first devil to be infected with DFTD spread his or her cancer cells to other devils, their immune systems failed to recognize the foreign cells as foreign — the DFTD cells weren’t being attacked and suppressed as would have happened if, say, the devils had been infected by a virus. 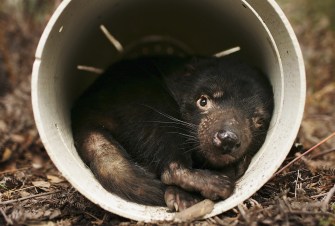 A Tasmanian devil is seen in a trap after being captured in the wild to check for signs of DFTD. Photo credit: Adam Pretty / Getty Images

A glimmer of hope

Since DFTD is a cancer, its nearly impossible to treat in wild animals — without opposable thumbs to mark off their calendars, Tasmanian devils have had trouble making their chemotherapy appointments. Some researchers have been working hard at crafting a cancer vaccine that, when injected, could prompt the devils’ immune systems to attack the debilitating tumors.

However, it seems like the devils are bouncing back without little help from humans at all. Dr. Rodrigo Hamede from the University of Tasmania has been monitoring DFTD and Tasmanian devils for years now. “Natural selection is trying to fix the problem on its own by favoring those who can survive the tumor, so we’re more hopeful these days than ever before,” said Hamede to the BBC. “We have witnessed how these tumors shape the ecology of devils and how they have been evolving with their hosts in real time.”

Remarkably, in just 16 years — eight generations for Tasmanian devils — the devils have evolved to resist DFTD. Usually, DFTD kills devils within a year or slightly longer by making it difficult for them to eat or through metastases. However, Hamede’s team has found some devils that have survived for two years with DFTD, enabling them to reproduce more frequently and give birth to young resistant to the disease. Even better, the team has recorded 23 cases of tumor regression, implying that some devils may be better equipped to fight against and recover from DFTD.

While this is all extremely encouraging, the Tasmanian devils aren’t out of the woods yet. To ensure the survival of the species, a small population of cancer-free devils have been brought to Maria Island, just three miles off the coast of Tasmania, which has no native population of Tasmanian devils. The same has been done in a facility in Hobart, the capital of the Tasmanian island state. No matter whether the devils or their cancer wins out the fight, with any luck, the species will survive.

Reality is more distorted than we think.
▸
with
Big Think
Life

Birthrates are cyclical and have gone up and down throughout history.
Up Next
Critical Thinking

China’s economy: The good, the bad, and the future

Weijian Shan, chairman of the PAG group, sees a bright future for investors in China, as long as they understand the evolving nature of the country’s economic growth. Though China’s […]