India now has nearly 3,000 tigers living in the wild. Due to concentrated conservation efforts and stricter wildlife policies, India’s tiger population soared 33 percent between 2014 and 2018. Prime Minister Narendra Modi, who recently presented the latest tiger census, said that the population has risen from 2,226 in 2014 to 2,967 in 2018.

The worldwide tiger population has been in a steep decline. With an estimated global population of 4,000 — India is home to around 70 percent of the world’s tigers.

Mr. Modi remarked that India is “now one of the biggest and most secure habitats of the tiger.”

Nearly a decade ago, India had embarked on a nationwide goal to double its Bengal tiger population by 2022. They’ve now reached that goal four years ahead of schedule. In order to protect their gains and expand their tiger population, they’ll have to keep enforcing their wildlife policies while also ensuring the safety of their new sanctuaries. 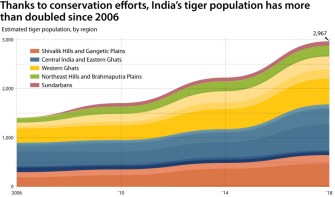 In the past 10 years, India has created nearly two dozen new reserves. Aside from creating space for tigers to live and prosper, these protective areas also create new spaces for wildlife and forests to flourish.

Tens of thousands of Indian officials and scientists track and count these tigers once every four years. They utilize a mixture of camera traps and video recognition software that creates a three-dimensional representation of each individual tiger. They usually have to cover a landmass of about 193,000 square miles.

The conservation efforts come in the wake of a devastating loss that occurred over the span of the past century. It’s estimated that between 1875 and 1925, 80,000 tigers were killed in just India alone. Sports hunting and official governmental sponsored killing sprees by kings and officials of the era sanctioned and encouraged this mass slaughter.

Eventually, the Indian government came to its senses and in 1972 enacted a law that essentially made it illegal to kill or capture any kind of protected wild animal. With continued awareness and strict enforcement, the hunting died down. With the help of global conservationists, India invested more money into the protection and growth of their reserves.

In certain parts of India, there is still strife between local villages and tigers. More will have to be done to educate the populace in these areas and strengthen the reserves.

Some estimates suggest that the tigers are only breeding and living in 10 percent of the total habitat set aside for them. The tigers are underutilizing their space, which often makes them wander outside of these areas and come into conflict with villagers nearby.

Another report, titled “Management Effectiveness Evaluation (MEE) of Tiger Reserves 2018,” showed that at least half of India’s reserves are facing encroachment threats from infrastructure like roads and rail lines.

Conservationists fear that the isolated conflicts that usually occurs on the edge of the reserves, will increase as protected areas grow. Tiger reserves are still threatened by illegal poachers, pollution, unchecked industrialism and climate change.

Modi believes that India’s tiger habitats should be expanded:

“There is a very old debate — development or environment. . . and, both sides present views as if each is mutually exclusive.”

He understands that there needs to be a balance struck between proper economic development and the protection of the environment.

This may just be the beginning of a tiger resurgence, if this type of thought prevails over India’s tiger conservationist efforts.

Should you blast the A/C even when you’re not at home?
Up Next
Hard Science

We may find signs of life a mere 31 light-years away.