Across the world, species are going extinct at a rate 1,000-fold higher than what experts consider natural. Aside from the intrinsic value of preserving diverse animal species, animal life contributes to the ecosystem and makes human society possible. Having a high diversity of animal species keeps this system stable.

That’s why governments often designate key species as “umbrella” species. These animals are protected because they perform critical work that facilitates the survival of numerous other species in its ecological community. For instance, the northern spotted owl is considered an umbrella species because their habitat, old-growth forests, are also home to many other productive creatures, like mollusks and salamanders. Since humans can’t log old-growth forests without infringing on the northern spotted owl’s protective status, these other species are indirectly protected as well. Others include grizzly bears, whose umbrella protects elk, deer, mountain goats, mountain lions, and bison, and tigers, whose habitats also support leopards, monkeys, hares, boars, and other animals.

But this system isn’t perfect. Umbrella species are selected solely on the basis that they share a geographical range with other species — the northern spotted owl and old-growth forests, for instance, or the grizzly bear and woodlands and meadows.

There’s likely a better, more effective way to select umbrella species. That’s why Ph.D. candidate Michelle Ward and colleagues examined umbrella species in Australia and developed a new methodology for their selection based on threats to the species, actions that can be taken to mitigate those threats, and their costs.

“The Australian Federal Government’s umbrella prioritization list identifies 73 species as conservation priorities,” Ward said in a statement. “But this only ends up benefiting six percent of all Australia’s threatened terrestrial species. This figure could be increased to benefit nearly half of all threatened terrestrial species for the same budget.”

Species protection is a particularly critical task for Australia, as the nation is home to nearly 1,830 threatened species and sees the highest extinction rates on Earth.

Threats tend to be specific to particular species, and taking action to address those threats doesn’t necessarily help the other species that have overlapping habitats. It could, however, help a large number of species living in distinct habitats. 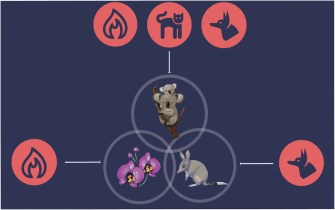 An example of how protecting species based on shared threats rather than shared habitat works. Koalas face several threats, such as from fires, feral cats, and foxes. Putting koalas under protective status would require taking action against wildfires (protecting orchid species) and foxes (protecting the greater bilby).

Protecting the Australasian bittern, the researchers calculated, would cost $2.3 million a year out of Australia’s estimated $550 million budget for threatened species protection, a far more cost-effective solution than protecting animals based solely on overlapping geographical ranges.

Ward also identified the koala, red goshawk, matted flax-lily, and purple clover as both highly impactful and highly cost-effective species to target for protective status. “Yet none of these appear on the existing federal government priority species list,” she said.

Currently, the Earth is in the midst of its sixth extinction event. These events have had different causes, such as the comet that killed 75 percent of all species including the dinosaurs, or the development of plant life and the subsequent sudden change in atmospheric composition.

The current extinction event, however, is entirely attributable to the different activities of human life. Most notably, this includes climate change, but it also is due to habitat destruction, pollution, and overexploitation of flora and fauna.

From the dawn of human civilization to today, 83 percent of wild mammals, 80 percent of marine mammals, 50 percent of plants, and 15 percent of fish have disappeared. Half of all existing species on Earth are expected to face extinction by the year 2100. While this crisis has been borne out of humanity’s excess cleverness, that cleverness may be able to help repair some of the damage as well — improving our conservation methodologies is just one part of what must be a larger strategy.

EV charging stations are the most widespread alternative to gas and diesel pumps. Each alternative has its own hotspots and “deserts.”
Up Next
Neuropsych

​The ‘85% Rule’: Why a dose of failure optimizes learning

If you’re always succeeding, you’re probably not learning much.