Norway never stopped whaling, and Iceland resumed whaling in 2003. Japan exited the IWC in 2019 and announced they would be ending their already-controversial annual Antarctic whaling expeditions and resuming commercial whaling in their territorial waters and in the country’s 200-mile exclusive economic zone along its coast, claiming research as their reason for doing so. According to the World Wildlife Federation, 31,984 whales have been killed since the moratorium when into effect.

Iceland’s two largest whaling companies have just announced they’re going keep their ships ashore for the 2020 whaling season. The companies’ motivations are apparently strictly monetary. “I’m never going to hunt whales again, I’m stopping for good ,” Gunnar Bergmann Jonsson of the minke whaling company IP-Utgerd told Agence France-Presse (AFP). The second company, Hvalur, which hunts fin whales, has only committed to halting operations for 2020. Neither company was out on the seas in 2019 due to low catches in recent years and other financial consideration.

Jonsson explained his decision to stop whaling to AFP as being primarily a reaction to an extension of the no-fishing coastal zone that forced his ships out further in search of whales, saying the change made continuing no longer financially feasible.

The CEO of Hvalu, Kristján Loftsson, explained his thinking to Icelandic newspaper, Morganbladid. Loftsson claimed that social distancing was a factor since it made operating vessels and processing whale meat more difficult. This doesn’t explain why his ships stayed home in 2019.

A more plausible explanation would be that Japan — the company’s primary market — has become less hospitable to his whale meat. He told Morganbladid that Japanese government subsidies for domestic whalers made it difficult for him to compete. It’s also the case that people in Japan are eating less whale meat. 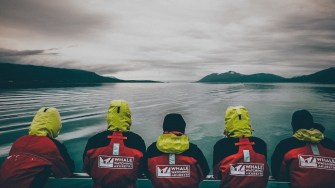 Árni Finnsson, chairman of the Iceland Nature Conservation Association tells National Geographic there’s another reason for Jonsson and Loftsson calling it quits: public sentiment is turning against the whaling industry. Finnson says, “What has changed is that the fishing industry is not willing to support him anymore. They feel that Iceland needs to be able to export fish to the U.S. market, and they don’t want to continue defending whaling. I think he’s done.”

In fact, Icelanders overall are less in favor of whaling, particularly in light of a newly booming industry: whale watching, which grew from 15-34% each year between 2012 and 2016. The most popular area for catching a glimpse of the animals is the eastern part of the large Faxaflói Bay.

These waters are minke territory. To keep whale-lovers and whalers apart, a small sanctuary in the bay was created in 2007. That was expanded by the government at the urging of Icewhale, an association of whale-watching companies in 2017. The enlarged sanctuary included the waters where 321 of the 335 minkes caught by Icelandic whalers between 2007 and 2016 were harvested, thus pushing whalers such as Jonnson out to sea.

In addition, while whale meat was never highly regarded in Iceland, and a recent poll found that just 1% of Inlanders now eat whale meat regularly while 84% say they never have.

“Hunting whales with cameras delivers economic benefits to coastal communities around the world, and Iceland is pointing the way,” says Patrick Ramage, of the International Fund for Animal Welfare (IFAW).

Even Norway is showing signs that the days of whaling may be coming to an end: The number of whaling vessels in 2017 was half of what it was in 2016, and just a third of the officially allowed number of whales were being taken during that time.

Some animals were even assigned their own lawyers.
Up Next
Neuropsych

Brain-computer interfaces give scientists their closest look so far at what the human brain does while we’re asleep.