To the northeast of New Zealand in the South Pacific lie six islands referred to as the Kermadec Islands. The group has a dark history with whales since sperm whales, humpbacks, and southern right whales where nearly hunted to extinction there in the past. That’s changed, though, and what would be the largest marine preserve in the world is under consideration for these islands: the 620-square-kilometer Kermadec Sanctuary.

Humpback whale songs have long been an area of fascination and study. What are they for, and what do they mean? We know that there are songs associated with different breeding grounds, but these songs tend to grow in length and complexity over the course of a whale’s lifetime, becoming more and more difficult to parse.

Researchers suspect that at least some of the embellishments come from other whales encountered along the way, providing clues about a whale’s social history and where it comes from. However, the mechanism that would allow sharing across such widely spaced migratory routes to summertime feeding grounds in Antartica has been a puzzle.

The authors of a report published this month in Royal Society Open Science have just confirmed the scientists’ hunch by filling in this blank. It turns out the Kermadecs — and in particular Rangitahua/Raoul Island — are a major crossroads at which the many migratory paths traveled by Oceania whales converge. This is where whales meet and exchange tunes, a few of which the researchers have now unraveled. 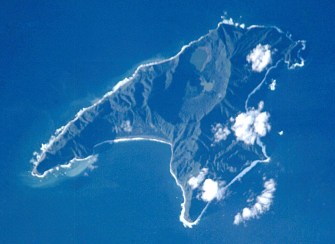 Where the twain meet

It’s been known that whale songs tend to cross in waves eastward across the South Pacific, from Australia to French Polynesia, over the course of about three years. “While convergence and transmission have been shown within a whale population during migration and on their wintering grounds, song exchange and convergence on a shared migratory route remained elusive,” recalls Dr. Ellen Garland of the University of St. Andrews.

There’s evidence of song sharing within groups, but not so much across them. The convergence of different routes near the Kermadecs changes that. Says St. Andrews’ Dr. Luke Rendell, “Song themes from multiple wintering grounds matched songs recorded at the Kermadecs, including a hybrid of two songs, suggesting that multiple humpback whale populations from across the South Pacific are traveling past these islands and song learning may be occurring.”

Songs of the sea

During September and October 2015 the researchers from the School of Biology at the University of St. Andrews in the U.K. recorded the songs of whales passing by the Kermadecs. The also captured songs at whale feeding and breeding locations east and west of Australia, and across the western and central parts of the South Pacific.

Their careful transcriptions of recordings from 52 whales overall resulted in the identification of three basic types of songs. As in human music, songs are comprised of groups of themes, which are groups of phrases, which themselves are groups of notes.

Most of the songs recorded were Type 2 songs, from the western Pacific. Almost none came from east Australia, and only a few from the central ocean. Two of these, labeled in the study as Songs 1a and 1b, were quite similar.

By comparing similarities and difference in themes and phrases researchers were able to tell where each whale had been born, confirming these identifications with photographs and genetic markers.

There are likely other migratory junctions at which new phrases and themes may be exchanged, but the Kermadecs are the first such place that’s been found.

These salamanders are helping unlock the mysteries of brain evolution and regeneration.
High Culture

The Industrial Revolution changed music forever, thanks to a combination of technological advances and clever entrepreneurs.
Thinking

Why, exactly, don’t you trust that person’s opinion?
Up Next
Think Again Podcasts

one night in Istanbul, with Chef Musa Dağdeviren

Taped on the Asian side of Istanbul, Turkey: The ancient art of coffee ground reading. Food as a citizen of geographic, not national borders. Chef and food ethnographer Musa Dağdeviren, author of THE TURKISH COOKBOOK, and his ambitious project to preserve Turkey’s rich and diverse cuisine.