In 2009, the NYC Department of Environment Protections discovered numerous pharmaceuticals floating around in the city’s tap water. A 2010 follow-up study concluded that trace amounts of Ibuprofen, caffeine, Butalbital, DEET—yes, insect repellent—and a variety of prescription and illicit drugs, along with personal care products, posed no threat to us.

A similar conclusion was reached in Britain, where in 2014 various substances, including cocaine, were discovered in that country’s reservoirs. Researchers noted the amounts were thousands of times below what would make an actual impact on our biology.

But what about other ecosystems? Earlier this year scientists uncovered a startling consequence of the drugs we put into of our mouths (and up our nostrils):

Researchers in Italy have found that small amounts of cocaine in water can make eels hyperactive and cause significant muscle damage.

European eels, they note, are an endangered species. And it’s not only eels. Oysters floating around in Oregon were found to contain antibiotics and pain relievers; Northeastern fish are displaying male and female sex traits thanks to birth control pills. Whether we flush, urinate, or defecate these substances, we’re destroying ocean life.

Side effects of antidepressants on marine life

And now, a new study published in British Journal of Psychiatry is targeting doctors and Big Pharma: marine life is suffering due to our overuse of antidepressants. Alex Ford, a University of Portsmouth professor in the Institute of Marine Biology, remarks,

Our aquatic life is bathing in a soup of antidepressants. Antidepressant and antianxiety medications are found everywhere, in sewage, surface water, ground water, drinking water, soil, and accumulating in wildlife tissues. They are found in sea water and rivers and their potential ability to disrupt the normal biological systems of aquatic organisms is extensive.

This is no weekend binge. Ford says that the animals spend their entire lives in this toxic environment, which affects their immune system, eating habits, color, behavior, metabolism, even the way they moves. In previous studies, Ford noticed that Prozac causes shrimp to leave their natural habitat to head toward light, making them more vulnerable to predators.

We’ve known about the consequences of our drug diet on marine life since the sixties. Like climate change, we’ve not only done little about it, we’ve made things worse. The opioid epidemic in America is not the only indication of this; antidepressant usage in the UK has doubled in the last decade, with 10 percent of the population taking them on a regular basis. 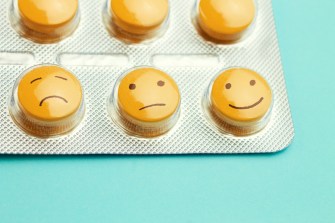 Even if you don’t care about marine life, this problem returns to haunt us: when we eat seafood, we’re putting those drugs right back into our bodies. If these pharmaceuticals are affecting fish physiology, they’re certainly affecting us.

The researchers put forward many suggestions to address this problem, including upgrading waste water treatment plants, requesting that the pharmaceutical industry green its “cradle-to-grave” approach, reducing prescriptions in favor of counseling, and coaching patients to limit the duration in which they consume antidepressants instead of building a reliance upon them.

Such compliance will be difficult, given Big Pharma’s profit motive and the fact that writing scripts is much more economically beneficial to doctors than counseling. Hopefully we won’t wait until there are no more fish left to eat to understand the gravity of this problem. In the meantime, it’s just another reminder that our addictions don’t only affect us. We’re all in this together. The sooner we realize this, the better.

To date, only one research vessel has ever encountered a milky sea.
The Future

What robots can learn from fish and fancy math

Icebergs aren’t just a threat to unsinkable ships. Their ability to cause underwater landslides poses a danger to coastal cities.
Hard Science

How to take Earth’s inner temperature with erupted sea glass

Scientists look to erupted sea glass — lava that erupted in the ocean and was instantly chilled by the surrounding water — to take Earth’s temperature.
Up Next
The Present