Post-traumatic stress disorder can last months, or years, or a lifetime, especially if that lifetime is cut short by suicide. The most common reasons include war, sexual abuse, assault, and accidents. The National Center for PTSD estimates that 7 to 8 out of every 100 people will experience it at some point in their lives.

Why some people are susceptible to PTSD and others come through traumatic experiences relatively unscathed is, in part, a matter of biology. Pinpointing an exact neurochemical cocktail leading to this disorder might take a while, if ever, to discover. Understanding physiology is only one step; therapy follows. Yet that too might not be enough. Trauma expert Bessel van der Kolk phrases it this way:

The act of telling the story doesn’t necessarily alter the automatic physical and hormonal responses of bodies that remain hypervigilant, prepared to be assaulted or violated at any time. For real change to take place, the body needs to learn that the danger has passed and to live in the reality of the present.

The unimaginable horrors of desert combat, child abuse, and rape are understandable mechanisms for triggering PTSD. These are the often the first images to mind when trying to empathize with victims. In popular culture, it is the army veteran or the abused woman going through such ordeals.

How about a CEO trying to migrate his entire San Francisco company to Daly City so he has a shorter commute in his Tesla each morning? Not exactly the picture of suffering. And yet, by the time you read former Reddit CEO Yishan Wong’s meltdown 300 pages into Christine Lagorio-Chafkin’s new book, We Are the Nerds: The Birth and Tumultuous Life of Reddit, the Internet’s Culture Laboratory, it’s hard not to empathize.

It wasn’t only Wong who was suffering. Reddit has long been considered one of the darker corners on the mainstream Internet, second perhaps only to 4chan in its widespread dissemination of disturbing content. As Lagorio-Chafkin, a senior Inc. writer who spent six years working on this exhaustive history, tells it,

Exposure to graphic messages, abrupt and out-of-context threats, and extremist viewpoints has plagued generations of Reddit employees. To the designated community team, it was staring at violent images, racist words, and sussing out what precisely constituted child pornography. It was the work of reporting bomb threats, possible suicide attempts, and illegal images of underage girls and boys to investigators. It was hearing the voices through the phone of young women whose jilted ex-lovers had posted pornographic images of them online, women violated and terrified about their futures.

Wong’s tenure was short. Others have emerged out of the chaos, though how well is up for debate. We Are the Nerds predominately focuses on co-founders Alexis Ohanian and Steve Huffman, as well as early employees Chris Slowe and Aaron Swartz, the latter whose suffering did in fact lead to suicide. If you want a deep dive into what made Reddit one of the most popular websites in the world, you’ll find it here.

Ohanian and Huffman met while freshmen at the University of Virginia. The two bonded over a shared passion for gaming and tech. Huffman, the coder, and Ohanian, the salesman, moved into an apartment together during their junior year. They both launched a number of projects and shared war stories from internships. But it was a meeting with computer scientist Paul Graham, one of the minds behind Lisp, that set them on their course.

The duo traveled to Cambridge to pitch MMM, a cell phone-based restaurant delivery service idea they’d concocted—how quaint a notion in 2004! Graham was launching a micro-funding tech think tank, Y Combinator, and was interested in having this duo in the pilot program. Incredibly, he rejected their proposal, yet had a change of heart; his phone call landed when they were halfway back to Virginia on the train. They hopped off at the next stop and crossed the platform to head north again.

MMM didn’t last and the duo wasn’t aware of Digg, but they were interested in a site that would become “the front page of the Internet.” Graham was interested in a more robust version of del.icio.us, but the site featured longer articles and journals. This was not do for in a society whose attention span was being halved by the day. It took a while to land on a name—Breadpig was the frontrunner, while poplex and aggpop were contenders—but on a whim Ohanian bought Reddit.com, a play on “read it.” Even today, Graham doesn’t think it’s a very good name.

Lagorio-Chafkin’s history is detailed, but I’m mostly fascinated by the stories within the larger story: the unmasking of Violentacrez, a somewhat respected moderator who also ran a subreddit on “jailbait” (among many other questionable topics) and what that says about freedom of speech versus freedom of anonymity; Reddit’s role in disseminating nude celebrity photos after an iCloud breach; the false identification of two men at the tragic Boston Marathon; a Reddit post that led to 2010’s “Gathering to Restore Sanity and/or Fear,” led by Stephen Colbert and John Stewart; Barack Obama jumping on to the most famous subreddit, Ask Me Anything, to directly engage with the public in 2012. 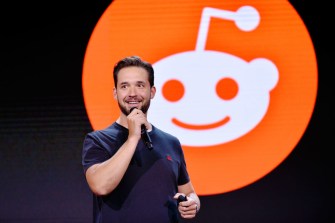 In many ways, Reddit has provided the cultural temperature more than any other site. In 2017, Huffman remarked that Trump’s ascendency to the presidency was not a surprise, given the activity on one of the site’s most notorious channels, r/The_Donald. Tech giants like Facebook, Apple, and Google have been under constant scrutiny for questionable security, privacy, and marketing practices. The content on Reddit has been questionable since day one, yet the site has escaped the broader scrutiny these other companies have had to endure.

Not that the site has been without its share of controversies. In fact, one could argue they lead in that category: questionable kidney donations, a celebrated and well-educated feminist taking over the reigns only to be petitioned out of her role, internal battles waged by ardent Trump supporters, banning alt-right activity, the hiding of Russian troll interference. Reddit is the true ground zero for free speech battles, as well as bigotry, misogyny, and xenophobia.

Which is what happens when the journey from prefrontal cortex to eyeballs is mediated by the screen instead of transmitted in person. It’s easy to blather at a screen; not so much in the presence of others. There is little accountability, not sense of agency on message boards, which causes us to forget real humans read the disgusting and profane content put forward over the years. As Lagorio-Chafkin writes,

The very concepts that made it possible for Reddit to become home to thousands of open, brutally honest, ingenuity-dappled forums that felt so much more genuine than the rest of the airbrushed-and-Photoshopped Internet had allowed users to hide behind u/names and cartoon alien avatars to say and do terrible things to one another. The real humans interacting there still had bodies, and those bodies—their colors, their shapes, their quirks—were fodder for abuse, hatred, and harassment.

The most inspired moments in Lagorio-Chafkin’s book happen when Redditors leave their digital lairs to commune in person. Online communities are benign; the intent makes the collection. By diving into the history of this incredible project, those people come alive. We Are the Nerds is an important reminder that the voice on the screen and the one infiltrating your ears are not necessarily the same. We need to grapple with both in the digital age. Sure, the shadows of Reddit are often most discussed by the media, but Lagorio-Chafkin does a wonderful job at humanizing the people behind the technology.

Social media distorts the reality of the public sphere.
Up Next

Starting a Business Website? Here is a ​Color Guide For You