Since arriving in North America in 2006, Pseuodgymnoascus destructans has been wreaking havoc in bat populations. The fuzzy white fungus rapidly infects bats, tending to cluster around the nocturnal mammals’ noses. Hence, the disease it causes is best known as white-nose syndrome.

Once P. destructans infects a bat colony, it wipes out about 90 percent of the colony on average. By agitating bats during the winter months when they’re meant to be hibernating, P. destructans forces them to emerge early and expend the energy they need to get through the winter. As a result, the cold-loving fungus has killed millions and millions of bats since 2006. Bats may not be the cutest or most popular animal out there, but the sheer scale of this plague threatens to drive bat species to extinction and thoroughly throw our ecosystem out of whack.

“This disease has really just been devastating,” said ecologist Joseph Hoyt. “We’ve essentially removed our dominant nighttime insect predator.” That’s why Hoyt and colleagues conducted an experiment in a Wisconsin mine to test out a new treatment for white-nose syndrome: Pseudomonas fluorescens, an inherently antifungal bacteria. Through their efforts, described in Scientific Reports, Hoyt’s team were able to increase survivorship in bats by more than fivefold. 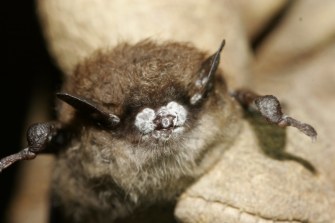 P. fluorescens is frequently used in agricultural contexts as an antifungal agent and has also been used to treat similar fungal infections in amphibians. What’s better, P. fluorescens is naturally present on bats already, so using it for treatment posed little risk of introducing additional threats to bat species.

For these reasons, P. fluorescens was an attractive subject for Hoyt and colleagues. To conduct their experiment, they picked a mine in Wisconsin that served as a hibernacula — a fancy term referring to caves in which bats hibernate over winter — for a colony of Myotis lucifugus, or the little brown bat.

Little brown bats were once one of the most common species in the northeastern U.S., but white-nose syndrome is quickly changing that. In fact, the year before in the very same mine that Hoyt and colleagues had chosen, there had been 226 little brown bats. On the year the researchers chose to conduct their experiment, that number had dwindled to just 82.

Prior to the start of winter, the researchers collected 60 bats from the mine with roughly 30 each to serve in the control and treatment groups, respectively. All bats were given a tag that would trigger a transponder near the entrance of the cave, alerting the researchers to a bat’s movements in and out of the cave and, in theory, to when the bats immerged from hibernation. In this way, the researchers could determine whether a bat had died during hibernation or whether white-nose syndrome had driven them out of the cave early. If the bats failed to return, they were presumed to have died. To confirm this, the researchers searched through all known sites within 50 kilometers of the focal mine to find any tagged bats who had immigrated to a new hibernaculum, but this proved not to be the case.

“Bats are really difficult to work with,” said Hoyt, “so being able to pull out some meaningful results from this work was a huge win for us.” And the results were striking. In the control group, only about 8 percent of bats survived the winter. But in the group treated with P. fluorescens, nearly 50 percent of bats survived. “It’s definitely exciting news,” said Hoyt. “Fifty percent is great. It’s not 100% like we would hope, unfortunately, but I am not sure we’ll ever get there.”

Significant challenges remain before we can solve white-nose syndrome. For one, Hoyt and colleagues applied their treatment slowly, tediously, to just a handful of bats. Bat colonies, however, can reach the thousands; treating huge colonies, who are at the greatest risk for white-nose syndrome, will be difficult. What’s more, P. fluorescens only helped save half of the bat population. Assuming this number holds in more large-scale treatments, bats still can’t afford to lose half of their colony members each winter. With more work and any luck, however, future researchers will be able to come up with a solution to treating bat colonies en masse and potentially discover the right combination of antifungal treatments to prevent death by white-nose syndrome entirely.

Should you blast the A/C even when you’re not at home?
Up Next
Starts With A Bang

This Is Everything That’s Wrong With Our Definition Of ‘Planet’

Not only can’t astronomers and planetary scientists agree, but the IAU made it worse for everyone.If you were alive in 2006, you likely remember a momentous event in astronomy: the […]