The Giant Panda’s iconic black-and-white­ fur makes it exceptionally recognizable in a world where mammals are generally a drab brown or dull grey, and according to a new study in the journal Behavioral Ecology, both camouflage and communication might explain why.

Despite the popularity of the Giant Panda, its color scheme had always been something of a mystery to scientists. But according to the researchers behind this new study, the Giant Panda’s unique color scheme is shaped by two main concerns: camouflage and communication.

The white fur of pandas has evolved to provide camouflage while they forage in the winter snow. Unlike other bears, pandas do not hibernate, in large part because they aren’t able to store enough nutrients for the long winter sleep, thanks to their near-total dietary dependence on the low-nutrient bamboo plant. White fur helps keep pandas camouflaged as they consume up to 80 pounds of bamboo a day (and defecate up to 40 times a day!) in the snowy highlands of their native habitat. 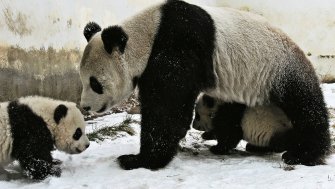 A panda mother with two cubs. Their black-and-white fur provides a compromise in appearance between camouflage in the snow and in the forest shade (Photo by China Photos/Getty Images).

The black fur of the pandas, by contrast, evolved to provide camouflage in the shades of the bamboo forests. Because the panda has to be active year-round and travel across long distances and habitat types, ranging from snowy mountains to tropical forests, so the white-black contrast in the panda’s fur represents a form of compromise in appearance.

However, the black circles around the panda’s eyes are thought to serve a more specific purpose: they act as “name-tags” that distinguish each panda as unique. In another experiment conducted in 2008, a team of researchers found that giant pandas used the “facial masks” for individual recognition and social communication. They found that even juvenile pandas were able to make distinctions based on the facial patterns, as well as retain those distinctions in memory for more than a year. The researchers of that study further speculated that, perhaps, mate choice might also be influenced by such facial patterns.

Like the markings around the eyes, the colour markings on the panda’s ears might also bear a particular significance. Researchers in the study said they found “links between contrasting ears and pugnacity,” and suggested that the black ears might serve as markers of aggression and as a warning to predators. 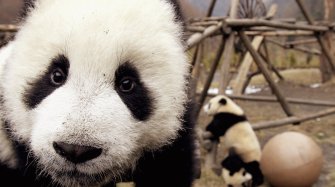 The black pattern around each panda’s eyes is unique, and can help them to identify one another (Photo by China Photos/Getty Images)

An expertise in black-and-white coverings isn’t something new to this research team, as they had previously worked on the question of why zebras too have such an odd black-and-white pattern of stripes. In the case of zebras, the answer was that their colors helped to repel biting flies like the tsetse and the horsefly.

According to biologist Tim Caro, who co-authored the new study on pandas:

“Understanding why the giant panda has such striking coloration has been a long-standing problem in biology that has been difficult to tackle because virtually no other mammal has this appearance, making analogies difficult.”

The method used by the researchers was comparative and drew on the fur colors of nearly 200 land-based carnivores, including 40 other bears. The insights of the researchers emerged from disaggregating the body parts of each animal and examining the fur coat colors for each body part in isolation.

A researcher explains a little-known niche within modern physics: animal collective behavior.
Up Next
Health

A patient’s brain showed activity for nearly 10 minutes after death, baffling doctors and prompting the need for further research.