Many new parents are often found asking “What should I do?” In search of help, people often turn to books, their parents, and those around them. Rarely do they have access to professionals that might have ideas they never considered.

Many governments think this is exactly the resource people should have. Over the last several decades, there have been many experiments by governments, academia, and NGOs to see what happens when you send professional parent coaches into people’s homes and give them advice. A two-year long program undertaken during the 1970’s in Jamaica found that children of parents who received visits form paraprofessionals, during which they learned ways to better stimulate their children’s mental development, saw better grades, test results, emotional stability, and incomes even 22 years later.

This has led to similar attempts to coach parents in childhood enrichment in several countries in Latin America, South Asia, and Africa. All of which have shown positive results.

However, a project in Brazil plans to outshine all other programs before it.

Programa Criança Feliz, Portuguese for ‘Happy Child Program,’ is an incredibly ambitious educational program based around home visits and parental coaching that has presented itself as a potential cure for many social ailments that have plagued Brazil for decades.

The brainchild of Osmar Terra, a Brazilian politician and physician who also holds a master’s degree in neuroscience, the program is designed to help bridge the gap between children born into wealth and poverty that starts long before school does.

“Inequality in Brazil starts when children are born,” Dr. Terra explained in this Financial Times article. “By the time they arrive at school, children from wealthier backgrounds have a level of vocabulary that is 40 percent higher than those from more deprived homes. We need to focus on the under-fours to tackle inequality in Brazil.”

An ever-increasing amount of research shows that there are many elements to assuring that children reach their developmental potential. The Lancet’s summary of the research explains this:

Childhood development is a maturational process resulting in an ordered progression of perceptual, motor, cognitive, language, socio-emotional, and self-regulation skills. Thus, the acquisition of skills through the life-cycle builds on the foundational capacities established in early childhood. Multiple factors influence the acquisition of competencies and skills, including health, nutrition, security and safety, responsive caregiving, and early learning. Each are necessary for nurturing care. Nurturing care reduces the detrimental effects of disadvantage on brain structure and function which, in turn, improves children’s health, growth, and development.

Though mechanisms like providing a secure, nurturing environment where the child is cared for and provided with early learning opportunities, parents have can help their child’s early brain development and prepare them for a fulfilling life. 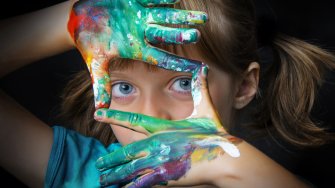 Creative play also has long-term benefits for children which parents can encourage if they are shown how.

How does it work?

At the very early stages of life, interactions with other human beings help establish the brain connections which help the child to learn when school starts. Things like singing songs, talking, and making eye contact with a toddler can help them forge these brain connections. On the other hand, children who are raised in high-stress environments or suffer from neglect and abuse develop less grey matter in the brain and can lag behind their classmates for years.

How does this program use this information?

During home visits by professionals and in classes given in central locations, parents are taught the vital importance of speaking, reading, playing, and singing with their child. They are given simple, stimulating toys like glitter filled water bottles or rollers made from recycled plastic and are taught how to encourage learning long before school starts. During home visits, care-workers also ask parents how they are doing and if they are following the program’s recommendations.

While some of this might seem like common sense, polls show that many parents didn’t know about these things. Even Brazilian Senator José Medeiros recognizes that he could have done better if he had been given more information, as he explained in this Quartz interview:

I raised my kids as if I were taking care of a plant. You give them food; you take care of them. I did not have all this information. If I had encouraged them, stimulated them more, I would have been able to contribute much more to their development.”

Given the evidence that wealthy children enjoy more mental stimulation than poor children do, this program hopes to break the cycle of poverty by attacking issues that arise in the earliest years of life. While it might not solve the problem by itself, it will make a large impact.

In raw economic terms, the payoff will be tremendous. Many studies suggest that early childhood education can give at least a 4 to 1 return on investment. By helping children reap all the benefits of their education, the program will improve Brazil’s economy by hundreds of millions of dollars a year over the long run even at a conservative return rate.

While the Brazilian program is too new to have usable data yet, the workers in the project claim there is rapid growth in some children as a result of the home visits. The results for the similar, though less ambitious, Jamaican program are listed above, and it isn’t too much to suggest that the Brazilians will see similar ones.

If the program is successful it could help lift millions of impoverished children out of misery, reduce inequality, improve health, and allow people to live more satisfying lives. It also has the potential to become self-sustaining, as the goal is to teach parents how to better raise their children rather than to let the state do it for them. As many a new parent has turned to their own family for advice, the program’s influence could reach all Brazilian children in a few decades. 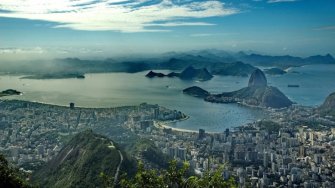 Rio De Janerio, the second largest city in Brazil. Imagine a future where all the children here are raised in accordance with cutting-edge neuroscience. (Shutterstock)

Is this all just hot air?

Despite the science, the project faces risks.

This is the latest in a long series of projects designed to lift millions of Brazilians out of poverty. While there is promise here, that promise won’t fully materialize for decades. The chance for funding to be cut to promote something that offers a quick fix is an ever-present risk.

Brazil also has to deal with political instability, the last two presidents have faced corruption charges, and the current one has an approval rating of 5 percent. While Criança Feliz enjoys support from many different parties, trying to keep such an ambitious project afloat might prove too much for a struggling government.

The question of how to walk into somebody’s home and tell them how to raise their child better, even if the new method is objectively better, remains. This also relates to the issue of how to get parents involved, one caseworker explained that some parents they were assigned to saw them as a nanny of shorts, and only started to engage with the program as intended after several months of marginally productive visits.

Could this work elsewhere?

As mentioned before, smaller versions of this have been done elsewhere to great success. The Brazilian goal of reaching four million families is ambitious, but there is little reason to think that it couldn’t work elsewhere. Since the program only costs twenty dollars a month per child, it is within reach of even the most impoverished nations.

Similar programs of reduced scope have been tried in the United States, such as the HighScope Perry Preschool Program Study. However, these programs tend to be housed in specialized centers, and home visits are incidental. The philosophy of the program also tended more towards better-structured schooling rather than parent coaching.

Given how strongly many Americans object to being told there is an objectively better way of doing something, the odds that the US would start a similar program anytime soon seem low.

Research shows us that good parenting during the earliest years of a child’s life can have massive payoffs in the long run.  The Criança Feliz program has the potential to educate millions of parents and help millions of children grow up to be smarter, more stable, and healthier using applied neuroscience.

While it will take decades before we know if it works and we are some ways out from seeing it in a neighborhood near you, even the slightest success has the chance to change the world.

The medicinal properties of ayahuasca come from two plants: Banisteriopsis caapi, a psychedelic brew that Amazonian indigenous populations have long used for spiritual purposes, and Psychotria viridis. The first randomized, placebo-controlled clinical trial of the beverage show that it can ease severe depression.