According to government statistics, 21.5 million Americans suffer from a substance abuse disorder, alcoholism being the most common. As of 2014, 64,000 lost their lives to some type of overdose. Although many treatment options are available, no matter the type of addiction, recidivism rates are exceptionally high. Now, researchers at the Medical University of South Carolina believe they can reboot the brain’s reward center and halt addiction. This is done through something called repeated trans-cranial magnetic stimulation (rTMS). What is TMS and how has it been shown to help those gripped by addiction?

TMS is a non-invasive procedure where a coil is placed on the scalp, which passes magnetic impulses through the skull. It’s believed that a changing magnetic field applied to certain parts of the brain increases coherence between cortical areas—essentially improving communication between different brain regions. The FDA approved this technique a decade ago to help ease the symptoms of depression when antidepressants failed to work.

The frequency applied during TMS can be as high as 10-20 Hertz or as low as 1 Hertz, depending on a person’s motor threshold. Motor threshold is determined by how much frequency is required to make a patient’s leg muscle or thumb jump, when TMS is applied to the brain’s motor strip. It doesn’t hurt. Patients report feeling a tapping sensation on the head. Sessions last 30 minutes and typically, treatment takes place a few times a week for six weeks. 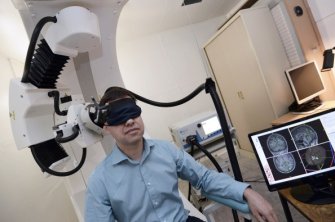 Since it’s applied to the scalp, deeper areas of the brain cannot be reached. However, TMS has shown to help those with depression by stimulating a part of the brain called the prefrontal cortex. Physicians are considering TMS for other conditions too, such as Parkinson’s, epilepsy, chronic pain, and schizophrenia. While brain stimulation has been used for decades to treat psychiatric disorders, only recently have researchers been experimenting with TMS to treat addiction.

The idea was inspired by a 2013 National Institute on Drug Abuse (NIDA) study, led by neuroscientists Antonello Bonci and Billy Chen. They used rats who were so addicted to cocaine, they’d risk a series of painful electric shocks in order to get their fix. The rodents had also been genetically altered, making the neurons in their brains responsive to light. When the scientists stimulated the area of the brain known for impulse control, the rats were able to kick the habit immediately. Bonci in the paper wondered if TMS might have a similar effect.

Luca Rossi—an Italian physician addicted to crack cocaine and his father, a chemist, after learning of this study, decided to approach Italian addiction specialist Luigi Gallimberti with the idea. Since then, Gallimberti’s lab has treated over 300 addicts with TMS. For addiction, generally the ventromedial prefrontal cortex, the reward center of the brain, is stimulated. This is thought to be where addiction originates from. Unfortunately, we still don’t know all the ins and outs of how addiction effects the brain. As a result, there’s no current treatment based on altering the neural circuit responsible for addiction, yet.

The ventromedial prefrontal cortex is the location of the brain’s reward center and as such, is responsible for addiction. Image credit: National Institutes of Mental Health (NIMH).

One thing we do know is that addiction hijacks the brain’s reward circuit. It floods the brain with dopamine—which gives us that warm, euphoric feeling. As a result, the brain’s dopamine receptors get accustomed to being flush with the feel good neurotransmitter. After awhile they get used to having a certain amount, a tolerance is built up, and so the person needs more and more just to get the same result, leading to addiction. Now, researchers at Medical University of South Carolina are the first to illustrate that TMS can reduce brain activity associated with addiction in cases of chronic cocaine and alcohol abuse. These findings were published in the journal Biological Psychiatry: Cognitive Neuroscience and Neuroimaging.

Researchers carried on two concurrent studies. Study author Tonisha Kearney-Ramos, Ph.D. led these, which were supervised by senior author Colleen Hanlon, PhD. The first part included 24 alcoholics and the second, 25 cocaine addicts. Each underwent an actual TMS session and a faked one, where researchers pretended to administer TMS, but didn’t actually turn on the machine. Scientists then took brain scans using an fMRI before and after TMS took place, to rate each participant’s response to drug or alcohol cues, such as being shown a liquor bottle.

Often, brain activity in the ventromedial prefrontal cortex becomes elevated when the person witnesses something related to their addiction. This is called cue reactivity. When they underwent bona fide TMS, participants showed less cue reactivity than after the sham session. What remains to be seen however, is if these changes result in reduced drug or alcohol use. According to the researchers, repeated TMS sessions might work. Cue reactivity is a big part of a lot of other conditions too, such as anxiety, PTSD, and traumatic brain injury. TMS may be able to help these patients as well.

Research shows women are better positioned than men to resist the automation of work and possibly even benefit from it.