The exact functions of sleep remain a mystery to scientists. Although studies suggest that a healthy sleep schedule helps people regulate their emotions, perform better on cognitive tasks, and even live longer, it’s still unclear exactly what the body is doing during sleep to bring about these positive effects.

However, one recent hypothesis suggests the brain uses its downtime to run a ‘cleaning cycle’ during which it removes metabolic debris, like amyloid beta (A-beta), the main component of the sticky plaques found in the brains of people with Alzheimer’s disease. According to the hypothesis, poor sleep hinders the brain’s ability to remove A-beta and over time the plaques build up. This puts people at greater risk of developing Alzheimer’s disease.

In 2013, scientists made an important discovery about the brain’s cleaning functions during sleep. The brain is the only organ that’s not connected to the lymphatic system, which removes waste and toxins from the body via the liver. Maiken Nedergaard, a neuroscientist at the University of Rochester in New York, thought that maybe the brain has a similar system, one scientists had yet to discover.

“I found it weird because the brain is our most precious organ—why should it be the only organ that recycles its own proteins?” Nedergaard told Science News.

To find out, Nedergaard and her team conducted a study on mice in which they tracked the flow of cerebrospinal fluid through their brains. They found that during sleep the spaces between mice’s brain cells widened by more than half, allowing fluid to wash through and carry away metabolic debris like A-beta.

“It’s like the dishwasher turned on,” Nedergaard said, adding that she dubbed this the ‘glymphatic system’ because it seems to be controlled by the brain’s glial cells.

Sleep quality seems to play a major role in how efficiently the brain removes A-beta. 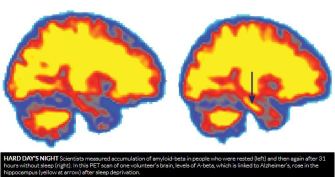 In a study published in April 2018, participants showed a 5% increase in A-beta accumulation after they had been deprived of sleep for 31 hours. The build-up occurred in the thalamus and hippocampus, regions of the brain that Alzheimer’s disease often hits first.

“I was surprised that it was actually so large,” study coauthor Ehsan Shokri-Kojori, now at the National Institute on Alcohol Abuse and Alcoholism, told Science News. “Five percent from one night of sleep deprivation is far from trivial.”

Another study published in June hints at a similar link between sleep quality and A-beta accumulation. In the study, researchers asked 283 elderly participants to answer questions about their health and sleep habits, and also to undergo multiple PiB-PET scans to measure A-beta levels in the brain.

The results suggested that people who got less sleep had higher levels of A-beta in their brains both at the start and end of the study.

The potential link between sleep habits and Alzheimer’s disease might seem disconcerting, but it would also illuminate a path toward treating and possibly preventing the disease that affects some 5.7 million Americans.

“If we find out that sleep problems contribute to brain amyloid—what that really says is there may be a window to intervene,” Neuroscientist Barbara Bendlin told Science News.