A new paper suggests past research on MDMA, the main component of ecstasy pills, often overestimated the dangers of the drug because the studies examined heavy users, not average ones.

The idea for the study, published in the Journal of Psychopharmacology, came when lead author Balázs Szigeti of the University of Edinburgh read about a neuroimaging study that claimed ecstasy use results in lower levels of serotonin transporter, a protein that’s been linked to anxiety and depression.

“I found it weird that they called users who take 2 pills twice a month ‘low to moderate users,’ I suspected that it is much more than what the average user takes,” Szigeti told PsyPost.

“The difficulty was to get data about ecstasy use patterns to test my hypothesis. I realized that the Global Drug Survey (GDS) is likely to have the data I need, so I emailed them arguing for a collaboration. They were interested and then we quickly realized that there is a point to be made here.”

The GDS is the largest drug survey in the world. It collects anonymous data each year from more than 100,000 drug users worldwide by asking questions about drug use frequency, how people lost their ‘drug virginity’, and whether it takes longer to get cocaine or a pizza delivered in a city, as VICE wrote.

Szigeti and his colleagues examined data from 11,168 GDS respondents who said they’d used ecstasy at least once in the previous year. The average person in this group took 12.2 ecstasy pills per year.

Compare that to the participants in 10 prior neuroimaging studies on MDMA who, on average, took 87.3 pills per year. That’s 720 percent more than GDS respondents.

“Our analysis suggests that ecstasy induced serotonergic alterations are likely to be overestimated for the majority of users. This is good news for ecstasy users and for the medical application of MDMA, but as we emphasize in the paper it does not imply that all ecstasy/MDMA use is harmless,” Szigeti told PsyPost. 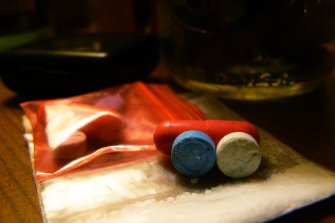 “GDS, which we use to estimate ecstasy use patterns, is an online survey that people complete on a voluntary basis,” Szigeti explained. “Thus, one major weakness is that our sample of ecstasy use patterns is not random, but rather based on a self-selected sample. Unfortunately, this limitation is hard to overcome given the illegal status of the drug.”

“The other major issue is that we only examined brain imaging studies, but not studies directly assessing ecstasy’s impact on cognition and other potential negative outcomes. This omission was due to that most studies did not report in sufficient details the ecstasy use habits of their participants.”

“Besides the implications for ecstasy use, we hope the study will highlight the importance of considering how drugs are used by real users when studying drug use,” Szigeti added. “Such information is often hard to obtain for illegal substances, nonetheless, it is critical for the research to be applicable to real-life users. We hope our study helps to highlight this point in the wider substance-use field.”

Ecstasy is a hard drug to research outside of a lab setting because pills often contain other drugs besides MDMA, like amphetamine, MDA, 2C-B, and methamphetamine. What’s more, some pills don’t contain any MDMA at all. This can make taking ecstasy, especially when combined with other drugs, dangerous and, sometimes, fatal.

In its pure form, however, MDMA is not only a relatively safe drug, but also one that could provide surprising mental health benefits.

In a 2018 paper, researchers describe how American veterans and first-responders who suffered from PTSD showed improved conditions after undergoing MDMA-assisted psychotherapy over a long-term period. The results encouraged the Food and Drug Administration to approve Phase 3 trials for the treatment, which are scheduled to begin this year.

In the aftermath of the creation of a neutron star, it can have a variety of masses, many of which are far in excess of the most massive white dwarf. […]