Then, they were asked to estimate how many calories and how much they’d pay for it.

The kicker? People would also pay more money for the foods containing both fat and carbs. Oh, and it’s very hard to stop eating them once you start. 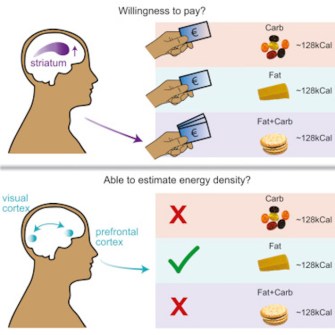 The key is in the reward center of the brain; these foods can light that right up, and release dopamine, the hormone that says, “Wow. I love this.”

With further study, it’s possible for scientists to figure out how to turn off that reward center, at least to a certain extent; as it is now, eating those foods tends to hit the reward center of the brain so much that it’s very hard for us to stop eating when we start. It’s not the same as other foods—in fact, it’s not all that recent that these foods were created, so they calculate that the brain doesn’t really know how to handle them. Before those foods were invented, humans didn’t have these kinds of options nearly as much as we do today.

The study also discovered that the brain can handle either carbs or fat, but not both at the same time; when presented with such an option, it doesn’t know quite how to respond.

So… bring on the donuts?

A medical entomologist points to metabolism, body odor, and mindset.
Up Next
Politics & Current Affairs

A full-time minimum wage isn’t enough money to rent an averagely priced one-bedroom home anywhere in the U.S., according to an annual report issued this week by the National Low […]