For some, the concept that our brains — the simple, three-pound chunks of matter we carry around in our skulls — could determine who we are is a distressing one. The idea of having an ethereal, eternal soul is a much more comforting thought, and somehow, it feels more reasonable to assert than that a complex experience as consciousness could arise from something as mundane as an organ.

But when you zoom in far enough, this proposal becomes less fantastical: the brain contains about 86 billion neurons, with over 100 trillion connections between those neurons. When you consider this density of connections, it’s clear that some pretty impressive phenomenon can come out of a measly three pounds. Although consciousness is a multifaceted experience, neuroscientists are increasingly able to pin down which regions of the brain correspond to which phenomenon in our daily life. For instance, neuroscientists have a pretty good idea of where intelligence — arguably one of the most fundamental features of consciousness — resides in our brains.

Tracking down intelligence in the brain

In the early 20th century, a psychologist named Charles Spearman discovered an interesting and intuitive correlation. Students who performed well in one subject tended to perform well in other, completely unrelated subjects. There was never a negative correlation between performance; a student gifted in reading also tended to perform well at math, though maybe less spectacularly. This suggested a hidden factor driving success in all these disparate domains.

Spearman called this factor g — or, the general intelligence factor. It’s what we think of when we think of what intelligence is, a kind of all-around capacity for understanding and integrating information and using it to solve problems. An individual who is particularly gifted at mathematics will likely perform well in memory retrieval tasks, in recognizing patterns, in reading comprehension, and so on because they have a high g factor. IQ scores are primarily derived from this specific factor, rather than merely one cognitive domain or the other.

For a long time, neuroscientists struggled with the puzzle of which part of our brains gave rise to general intelligence. We knew that the sensation of fear arose in the amygdala, that the hippocampus has a great deal to do with the encoding of memories, and even that the prefrontal cortex is associated with our executive functioning, such as our ability to switch between tasks and inhibit our behaviors. However, although the prefrontal cortex certainly has a lot to do with intelligence, the specific area or areas of the brain that determine how well somebody can recognize patterns, think critically about a subject, or speak persuasively were a mystery for a long time.

Now, thanks to neuroimaging research, many neuroscientists believe that a network across several brain regions is responsible for intelligence. The parieto-frontal integration theory, or P-FIT, proposes that intelligence arises from a network mostly located in the frontal and parietal lobes. 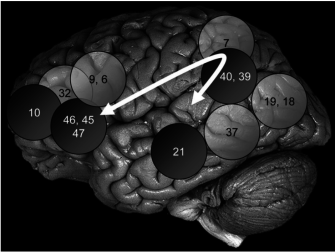 In a review of 37 neuroimaging studies focused on intelligence and conducted on more than 1,500 individuals, researchers found that activity in the parieto-frontal network correlated with higher scores on the Wechsler Adult Intelligence Scale for the majority of participants. The researchers identified that the network’s efficiency in communication was responsible for an individual being more or less intelligent, and variations in this network also corresponded to the differences in how individuals approach problems.

“Recent neuroscience studies suggest that intelligence is related to how well information travels throughout the brain,” said Richard Haier in a press release, a professor of psychology at the University of California, Irvine, who helped identify the parieto-frontal network. “Our review of imaging studies identifies the stations along the routes intelligent information processing takes. Once we know where the stations are, we can study how they relate to intelligence.”

How well does P-FIT fit?

However, this theory is mainly based on images from fMRIs, which are problematic in a few ways. The first is that they are correlational. It’s difficult to definitively claim that because one region of the brain lights up under an fMRI when a task is being performed, that region is responsible for task performance.

In addition, modern fMRIs can track blood flow to different regions of the brain, but they don’t actually track the activity of specific neurons. Neuron activity and blood flow are linked, but since we can only measure blood flow, we lose some details that may provide insight.

That’s why studying brain lesions are an important part of neuroscience. Lesions are just any kind of tissue damage, and brain lesions are useful to researchers because they can show definitively what functions that region of the brain has. For instance, when a lesion occurs in Wernicke’s region in the brain, the affected individual will have difficulty comprehending language but will remain capable of speech; this is because Wernicke’s region deals with language comprehension, while Broca’s region deals with the production of language. When researchers have had the opportunity to study brain lesions in the regions identified by P-FIT, they seem to confirm the theory.

For example, researchers scanned the brains of 182 Vietnam War veterans who had received brain damage during the war. They identified the locations of their brain lesions and administered the Weschler Adult Intelligence Scale and the Delis-Kaplan Executive Function System, which measure IQ and executive function, respectively. The results found that IQ and executive function scores did, indeed, vary depending on whether participants’ lesions were located in the parieto-frontal network or not.

The case is still open

Of course, P-FIT is far from the only theory we have about intelligence. Some, for instance, argue that brain waves are the most influential component of intelligence, coordinating neural activity depending on the task at hand. Others claim that rather than any one network in the brain, intelligence is more a function of neural plasticity and the dynamic reorganization of brain networks — the more plasticky and flexible your brain is, the smarter you are.

We’re still a long way off from knowing for certain which parts of the brain create intelligence, or whether this is even a reasonable puzzle to solve. Thus far, P-FIT seems to be the strongest theory around, although its competitors have similarly compelling cases. As our technology and understanding develops, hopefully we’ll have a more complete picture of intelligence in the future.

We also don’t know how Tylenol works. But it does work.
Up Next
Strange Maps

The Glen McLaughlin Collection brings together more than 700 historical examples of ‘California as an island’.