Humans are facing one of the most trying and catastrophic challenges of our time. The threat of a worldwide climate crisis. While many have rallied and answered the call, there are still hold outs with their heads in the sand. Why might this be?

We’ve been inundated with warnings, evidence, and even first hand experience ourselves of the threat of climate change. New neuroscience research suggests that people don’t pay attention or have an emotional response because of the way that we’re phrasing the problem. Phrases like “global warming” or “climate change” have gone stale.

Research from an advertising consulting agency in New York shows that the phrase “climate crisis” has been found to get 60 percent more of an emotional response.

A company called SPARK Neuro, which measures brain activity to determine people’s emotional responses to stimuli conducted the test. They set out to find if the rhetoric of climate change needed some changing. Using millisecond electroencephalography (EEG) and galvanic skin response (GSR) recordings as different political affiliated voters listened to audio of controversial statements. This data was then turned into a quantitative neurological profile.

120 people were part of the experiment and evenly split into three groups – Republicans, Democrats and Independents. They wore (EEG) devices on their heads so that researchers could measure electrical activity and webcams videoed them to track their facial expressions. Finally, straps attached to their fingertips measured heightened emotions through the (GSR).

With all of this data they were able to accurately predict the change in emotional response and quantify their subject’s reaction to new phrasing for climate change.

The participants of the study listened to six phrases. The ones that performed the worst in terms of emotional engagement or attention were “Global warming” and “climate change”. 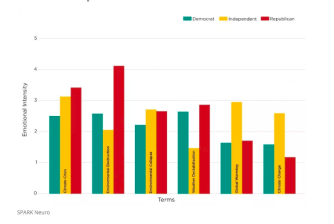 Something as small as a quick phrase change can have a huge impact. People who want to learn how to communicate the importance of saving our planet in the midst of a climate crisis, need to take note.

SPARK Neuro’s CEO, Spencer Gerrol stated: “People understand that something is not working about climate change and that some change needs to be made.”

Gerrol goes on to say that these words are incredibly worn out. The problem with these terms is that they don’t signify much. The statement “climate change,” doesn’t really mean anything. The climate is always changing. What’s a laymen or unconcerned citizen supposed to say to that? Take even the phrase “Global warming” at face value. Who after all doesn’t like a little bit warmer weather?

The problem of course is much greater than that. But before you can get to the facts and tell someone the disconcerting truth of a world ravaged by climatic blight, you need to first get their attention.

We also don’t know how Tylenol works. But it does work.
Up Next
The Present