Flirting is a universal part of human life. As social animals, we require a natural way to express sexual interest in others and promote ourselves as worthy partners. This is why flirtatious behaviors appear in every culture in some form. Without it, our species would be in reproductive gridlock.

But then why does flirting make some of us so darn anxious?

Flirting is tied to the limbic system, those ancient parts of the human brain that control survival-based drives, such as sexuality and all the emotions that come with it. Here, flirtation is less a social skill and more an impulsive behavior that takes our intellect hostage. A flirt-or-flight response.

But flirting isn’t entirely instinctual either. It’s also governed by cultural rules and social etiquette. Breaking these rules, an embarrassing rejection, or pursuing affection at an inappropriate time can lead to a loss of social capital that can be hard to recover.

Stuck between the instinctual and social, it’s no wonder that people feel at odds with themselves when it comes to the art of the flirt.

While we can’t rewire the limbic system to be less overbearing, we can study this evolutionary equation and gather tips to help us become more comfortable in our own hormonal skin. Here are seven keys to flirting, according to science 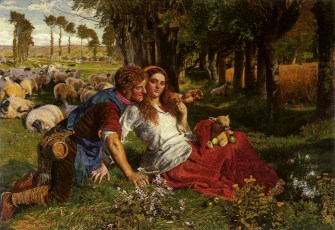 The Hireling Shepherd (1851) by William Holman Hunt.(Photo by: Picturenow/UIG via Getty Images)

It’s the well-intentioned platitude of mothers everywhere: “You just need to be yourself. Be confident.” It’s also the best and worst advice for flirting. Self-confidence is a prerequisite to many of the techniques mentioned below (see eye contact). Yet, it’s easier to say be confident than to be it.

Dr. Ivan Joseph, author of the book You Got This: Mastering the Skill of Self-Confidence, doesn’t consider self-confidence an inherent personality trait. As that title suggests, he views it as a skill that anyone can develop.

Joseph argues there are several habits you can adopt to foster self-confidence. He points to repetition (successful flirts are the ones who flirt), self-affirmation (believing in your value as a person), and the power of positive reinforcement (learning to recognize positive qualities you can bring to a relationship).

“If I could give you one thing to take from this [talk], it is no one will believe in you unless you do,” Dr. Ivan Joseph said during his TED talk.

How to bring more confidence to your conversationscontent.jwplatform.com

“Laugh and the world laughs with you; Weep, and you weep alone.” Ella Wheeler Wilcox may not have known it while writing Poems of Passion and Solitude, but she unlocked a secret to being a fantastic flirter: smile.

Smiling triggers two psychological phenomena in people. The first is self-perception theory. As noted by Professors Simone Schnall and James D. Laird of Clark University, self-perception theory posits that if you act as though you are experiencing a certain emotion, you will feel that emotion. “In that sense, feelings are the consequences of behavior, not the causes: We feel happy because we smile, and angry because we scowl,” they write.

The second phenomenon is emotional contagion. Happy people are more approachable, more attractive, and more enjoyable to be in relationships with because their happiness infects us. Morose people, in contrast, bring others down and are anything but approachable when moping in a corner.

Want others to enjoy flirting back? Smile. 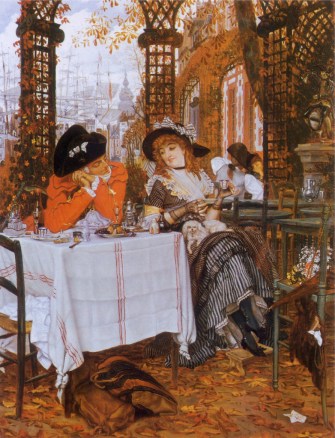 Cafe Rendezvous (1868) by James Tissot.(Photo by: Picturenow/UIG via Getty Images)

In a study published in the Journal of Research in Personality, participants were paired with strangers of the opposite sex. They were then asked to either stare at the strangers’ hands, gaze into their eyes, or count their eye blinks. Participants who gazed into each other’s eyes reported higher feelings of affection and liking.

But some of us feel more comfortable staring at the Sun than making eye contact with an attractive other. Thankfully Jodi Schulz, an extension educator at Michigan State University, provides some pointers.

She endorses the 50/70 rule—that is, maintaining eye contact 50 percent of the time while speaking and 70 percent while listening. To prevent awkward staring, she also recommends glancing to the side occasionally. The movement should be slow and deliberate. Move your eyes quickly and you look nervous, while glancing downward signals a lack of confidence.

Schulz’s pointers are for eye contact in everyday situations, but they provide a useful benchmark to get started. As the above study suggests, if the frequency, intensity, and duration of the eye contact intensifies naturally, it’s a good sign you’ve moved from the friendly to the flirtatious.

Your smile is playful, and your eyes are engaged, but there’s still the rest of you to consider. Body language is an essential component to communication and, like smiling, plays an important role in self-perception and emotional contagion.

Jean Smith, a social and cultural anthropologist who studies flirting, advises approaching people with an open body. Don’t cross your arms and make sure your shoulders are facing the person.

Body language can also help you tell if the person returns your interest. If their feet are pointing at you, Smith says, then you have their attention. If they are pointed to the side away from you, they are subconsciously planning their escape route.

Jim Gaffigan: The Psychology of Why We Laugh at Self-Deprecating Humorcontent.jwplatform.com

Humor is a congenial flirting technique. According to Jean Smith, laughter indicates attraction and, whether you are telling the joke or guffawing along, stimulates our brains to produce oxytocin, “a liking enhancer.”

Oxytocin is produced in the hypothalamus, a part of the limbic system. It is also released during sex and plays a role in childbirth and nursing—so we see again how the social and instinctual are closely tied together in the human brain.

However, Smith does share a word of warning regarding humorous flirting: “This is where people often get it wrong, because they want to attract everybody. But no. You just want to attract those people who match with you.”

A shared sense of humor, Smith points out, is a great measure for such matches.

“Are you a parking ticket? Because you’ve got fine written all over you.” There’s a reason pick-up lines like these are the punchlines of uninspired jokes and lame memes. They’re. The. Worst.

According to a study in the journal Sex Roles, both men and women found pick-up lines to be the least desirable way to start a flirtatious conversation.

While both sexes agreed pick-up lines are lame, they differed on the best way to begin a conversation. On average men preferred the direct approach, while women preferred innocuous, indirect conversation starters. 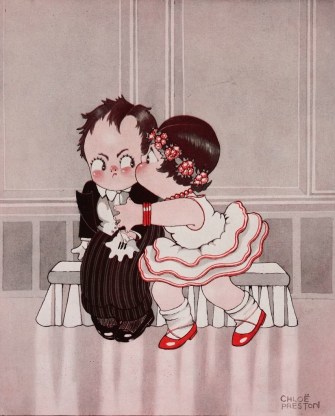 The Constant Nymph, The annoying Kiss (1927) by Chole Preston.(Photo by De Agostini via Getty Images)

Learning to recognize the signs of flirting can help you garner the confidence to flirt back or understand when the object of your attraction isn’t interested. Unfortunately, we’re all bad at this. On average, neither men nor women can recognize flirting, but both sexes are exceptionally good at recognizing when people aren’t into them.

This mental blind spot is likely a way for us to manage social etiquette. If you don’t recognize someone flirting with you, you lose nothing; however, if you misinterpret someone’s interest, you run the risk of being perceived as crass, lacking in social grace, or being plain embarrassed.

Smith already taught us how to read feet and open body language, but there are other telltale signs. One study found that men are more likely to use dominance signals through body orientation, such as taking up space or leaning in. Meanwhile, women tend to engage in body presentation, by accentuating physical features through posture, twirling their hair, or caressing their lips or neck.

People are also more likely to flirt in locations that are sociable, such as gathering places for those with shared interest or those that, of course, serve alcohol.

You may have noticed that a lot of these tips deal less with promoting one’s self than they do with engaging with others. Smiling, humor, and body language all create connections through psychology that make others enjoy your presence as much as they promote your search for intimacy.

Not only does this take the pressure off flirting, but it also numbs the sting of rejection.

Dr. Smith sums it up nicely: “When we think about flirting like this, it totally changes our paradigm of rejection. And in situations where we’re often feeling self-conscious or a bit nervous, we have scientific tools to help us remember what to do. And finally, it makes it not about us.”

So go out, have fun, and make some connections. If you manage that, the survival of the species should work itself out.

People naturally judge fact from fiction in offline social settings, so why is it so hard online?
The Learning Curve

Actor and science communicator Alan Alda shares his three rules of three for effective and empathic communication.
The Past

Marcus Tullius Cicero is widely regarded as one of the most gifted orators in human history. His writings can teach us a lot about the lost art of public speaking.
13.8

Mentors change lives. Find one, be one

Your mentors made time for you. Now, go and make time for others.
Up Next
Neuropsych

How your brain can predict the future