To get to Mars, we’ll have to spend trillions of dollars engineering aluminum tubes full of jet fuel. Then, we’ll have to fire those tubes off into space to hit a target 34 million miles away in space. When we manage that, we’ll have to construct a tiny habitat with all the prerequisite conditions for humans to survive. Next comes the hard part.

Getting life to Mars is going to be challenging; keeping it sane might be even more difficult. The human brain is configured for survival on Earth in the company of other humans. When traveling to and living on Mars, human beings are going to have to adjust to some pretty bleak conditions. 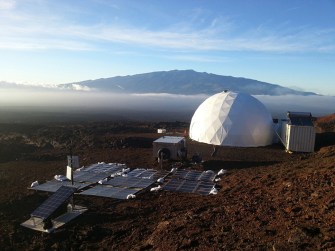 The HI-SEAS habitat, located on the side of a Hawaiian volcano, is designed to recreate living conditions on Mars.

Thirty-four million miles away from our destination, on the side of a volcano in the objectively and relatively balmy Hawaii, NASA researchers have built a facility designed to recreate the reality of life on Mars — at least, what life will be like for the very first Martians.

The Hawaii Space Exploration Analog and Simulation (HI-SEAS) facility has approximately 1,200 square feet of floor space, which is slightly larger than the average studio apartment in the U.S. Unlike a studio apartment, however, the space is shared by six crew members who have voluntarily isolated themselves there for between four months and a year. The aim of this project is to study how humans will react to Martian conditions.

All of their communications with the outside world are delayed by 20 minutes (a relative luxury compared with Mars’s 40-minute delay). Their showers are limited to 30 seconds to recreate the limited water they’ll have access to on Mars. When they leave the habitat to perform the simulated work of an astronaut, they have to don a bulky “spacesuit” before they can stumble around the Hawaiian volcano, collect “Mars” rocks to analyze and repair faulty machinery.

There have been six different missions carried out in HI-SEAS since 2013. In each and every one of these missions, the crewmembers grew absolutely incensed with one another. On the most recent mission, mission VI, one crew member was accidentally electrocuted and, stuck in the isolation of the facility, the others argued over whether or not they should abort the mission to call an ambulance. (There’s also a fantastic podcast out about the experiences of the various HI-SEAS missions called The Habitat.)

On Mars, the conditions are going to be even harder. For now, it has yet to be determined how long the first Martians will be kept in isolation with one another. And when an accident happens, like it did on Mission VI, there won’t be any ambulances coming, and it won’t be possible to abort the mission. 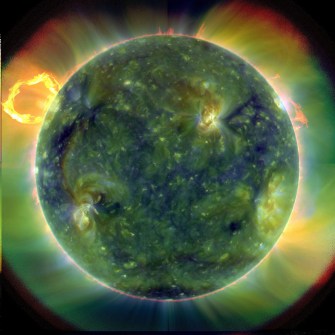 Cosmic rays produced by the sun and other celestial phenomenon will severely affect our brains.

Extreme isolation won’t be the only challenge the Martians will face in preserving their mental health. Many of the wonderful things about Earth are completely invisible, like its atmosphere and magnetosphere. In space, during the months-long journey to Mars and on the surface of the Red Planet itself, there will be nothing to shield us from the panoply of cosmic rays that constantly permeate the universe.

Scientists have exposed rodents to the highly charged particles that astronauts will experience in outer space. Over time, areas of the mice’s brains became inflamed, and they exhibited extensive neuron damage — specifically, the mice’s neurons had reduced dendrites and dendritic spines, which are important for neuron-to-neuron communication. In the mice, this kind of neural damage remained unchanged for six months after initial exposure to cosmic radiation.

So, what does this brain damage mean behaviorally? In humans, this kind of damage is associated with dementia, memory deficits, performance impairment, anxiety, depression, and impaired decision-making.

The most worrying finding from this study was how exposure to cosmic radiation affected the mice’s fear-extinction abilities. Fear extinction is the ability to “forget” about prior traumatic experiences, such as how you can become comfortable driving car again after being in an accident. This kind of response fails in people suffering from PTSD and can increase anxiety.

On the International Space Station, Earth’s magnetosphere still shields astronauts from most of these cosmic rays, but on the 300-day minimum journey to Mars — let alone the unknown period of time astronauts will spend on Mars—there will be no way to defend from this cosmic radiation. Some solutions are being pursued, but it’s uncertain whether they will be feasible in the long term. 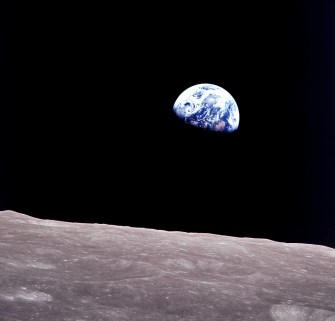 The overview effect is the sensation of humility and benevolence that astronauts feel upon seeing the Earth in space. What happens when the Earth slips from view millions of miles away?

Ever since humans first traveled to space 60 years ago, astronauts have reported feeling a tremendous cognitive shift upon seeing the Earth as a whole, hanging in the void. It’s called the overview effect, and it’s generally considered to be positive. It’s characterized by a sense of humility, of a desire to protect the Earth and humanity, and a recognition of how silly our tribal squabbles really are in the grand scheme of things. In a survey of 30 astronauts (admittedly, not a very large sample, but there aren’t very many astronauts out there), Professor Nick Kanus found that the number one reason these astronauts saw their space experience as positive was due to seeing the Earth from space.

Kanus theorized that there may be a kind of anti-overview effect — the “Earth-out-of-view” phenomenon. It’s possible that as the Earth diminishes from a massive planet to a pale blue dot and then to invisibility, humans may undergo incredible stress as nearly every other human slips away from them. Away from the norms and expectations of society, astronaut behavior may become untethered from what we consider acceptable.

This is entirely speculative, of course — no astronaut has traveled far enough that the Earth becomes invisible to them. But combined with the intense cramped quarters of spacecraft and Martian habitats, stuck with the same crew members for years, only communicating with the outside world over a 40-minute delay, and with their brains being irradiated by high-energy particles from space, it’s clear that staying sane is going to be a significant challenge. When we think about the challenges of space flight, it’s often in the realm of the technical. It’s important to remember that human beings are just that — human beings. On Mars, surviving and living are going to be two very different things.

Living on Mars: A 4-step guide for humans

Or why I’m coming out as an impatient optimist.
Up Next
Hard Science

The dangers of overspecialization in academia

Overspeciliazation may be hampering progress in the context of higher education and scientific research.