In 2001, Colombian neuroscientist Rodolfo Llinás declared that prediction is the ultimate function of the brain. Such a sentiment was apparent in the earliest forms of biological life. Eukaryotes used intention to survive; move toward sustenance, flee from toxicity. Predicting where to harvest the necessary and avoid danger, he argued, is the foundation of what would evolve into nervous systems and all that followed: emotions, thoughts, consciousness.

This is also the process that birthed minds; Llinás prefers “mindness,” denoting an active process over a static occurrence. Thinking, he continued, is the result of the “internalization of movement” by these predicating organisms. Before conscious awareness was even possible, movement propelled cells and, eventually, neurons around the planet (and throughout bodies). What we now term thought is the extension of prediction achieved through movement.

Thoughts are not usually presented as movement, even if they are known to “run away from us.” In her new book, Mind in Motion: How Action Shapes Thought, Stanford University psychology professor Barbara Tversky challenges the long-standing notion that language is the true catalyst for thought—that thinking is impossible without language. She argues that it is not verbal communication at the root of thought. Instead, spatial thinking gave rise to the myriad systems of written and oral communication we employ today.

Tversky focuses on a variety of communication systems that transcend language: gestures, signs, maps, accounting, music. Our brains attempt to pin down moving things so that we can act upon them with our minds. As it’s impossible to comprehend the intricate relationships of parts in action, we instead grasp sections and fill in the gaps from experience—prediction. While language is the vehicle we often use to express these relationships, Tversky writes that far superior tools are at our disposal. We use them all the time.

Mapping is one primary example. The cognitive leap it took to imagine life from above is astounding, especially considering that it occurred eons before drones (or photography). Humans are oriented spatially; we best understand head-foot (top-down) directionality, followed by forward-backward. Our worst orientation is left-right, a fact I can confirm, having taught yoga and fitness for 15 years; students regularly confuse sides.

The oldest map, dating back over 15,000 years to a Spanish cave, offers an extremely complex understanding of spatial orientation. Not only the direction of various landmarks (seen from above), but, it is believed, a plot to ambush game. Spatial awareness plus prediction. In the ensuing millennia, brave voyagers of the mind mapped oceans and cosmos using rudimentary tools. An inner GPS, sure, but also the endless creativity afforded us by our complex imaginations. Unlike other animals, we can mentally see ourselves from multiple angles.

Even with all that creativity at our disposal, written language is derived from the most pedestrian occupation: accounting. Using lines and dots on rocks and papyrus, tallying grain and livestock proved to be an essential business skill for farmers and craftsman in emerging nation-states. The marks we today call language originated with ensuring my dozen cattle were fairly compensated by your ton of wheat. Before poetry takes flight, Maslow would argue, nutrition must be ensured.

We still orient spatially; we have no other choice. Biology still dictates culture. Tversky says language isn’t the best vehicle for accomplishing this. Many signals are wordless. The glance of a potential partner. A waving arm suggesting east. A red light doesn’t stay “stop.” Though a stop sign does, a red octagon would suffice.

The same holds true for instructions. Tversky has spent decades conducting such studies; she finds furniture assemblage to be a particularly important skill for determining spatial orientation. Interestingly, she notes that people high in spatial ability related to assembly are better able to articulate instructions in both words and diagrams. Communication crosses mediums.

A similar phenomenon underlies her entire book: Paying attention to your environment makes you a better communicator. Our surroundings constantly send us instructions. 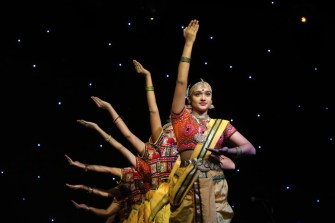 In the human domain, Tversky spends many pages covering gestures, which are actually a more informative means for conveying information. It makes me recall the Indian dance style, Bharatanatyam, in which the subtlest eye movements and finger turning convey so much. We all gesture, all the time, with a wink, the sucking of teeth, pointing with our fingers or eyes.

Thought, then, is preverbal, rooted in movement. As Llinás would say, thought is movement. Understanding that fact makes us powerful conveyors of information. As Tversky puts it, “If thinking is internalized action, then externalizing actions on thought as gestures that perform miniatures of the actions should help the thinking.” Just as bilinguals can communicate with a broader range of the population than monolinguals, people that convey nonverbal forms of communication seem to be stronger communicators overall.

This has important consequences in an age of fractured, tribalist media. When we map, we assume the perspective of others, a phenomenon Tversky calls “empathetic design.” She noticed that empathy not only leads to better design choices, it also spurs creativity. The ability to step into the shoes of others not only makes you a better communicator, it has the potential to make you a stronger critical thinker and, arguably, a better person.

For what do we have other than our thoughts? As she puts it, “We organize the world the way we organize our minds and our lives.” As Malcolm Gladwell pointed out two decades ago in The Tipping Point, humans are extremely sensitive to their environments. He too discusses the influence of gesturing and pantomimes, how masters in these domains become ideal connectors and salesman. Years before the genre existed, Gladwell defined the skillset of influencers. Tiny details—a cocking of an eyebrow; a deep sigh—have profound effects. You just have to be aware enough to notice.

Tversky’s prose-filled book (beyond subject matter, she is an exceptional writer) is an essential read in an age when many people orient on their phones instead of by looking around their environment. Sure, cartographers imagining routes led to satellites pinpointing them, which led to Waze; we are the beneficiaries of much trial and error. We just have to wonder what is lost when we augment away too much reality. Tverksy’s first law of cognition (of nine): “There are no benefits without costs.”

Climate activists’ brand of iconoclasm is far removed from the Beeldenstorm that swept medieval Europe.
Up Next
Starts With A Bang

If you thought that diamonds were the hardest things of all, this will have you thinking again.Carbon is one of the most fascinating elements in all of nature, with chemical and […]