The definition of family structure changes every generation. Though certain elements are rooted in biological elements, it is also a cultural phenomenon.

While the so-called “traditional” structure — husband and wife, with the man working and the woman staying home — has been fluid for decades, a new study in Spain reveals a potentially game-changing shift in how children are raised and whether or not they’ll even be born.

In 2007, Spain introduced two weeks of paternity leave for fathers. Through that national program, qualified men were fully paid for their time off. It was so popular that in 2018 it was expanded to five weeks. Officials expect that duration to extend to 16 weeks by 2021.

Lídia Farré at the University of Barcelona, Spain, and Libertad González at Pompeu Fabra University, Spain, wanted to better understand the cultural effects of this shift in childbearing. Two interesting findings emerged. First, women re-entered the workforce more quickly after giving birth. There was a shift in men, too: They wanted fewer children.

While this is one study in one country, Spain is unique. Before paternity leave legislation was passed, men there wanted more children than women. This is in stark contrast to other European countries.

Content not available
The benefits of paternity leave | The Economist

The benefits of paternity leave | The Economist

Fortunately for the researchers, they had two pools to research: Men that were eligible for paternity leave and those that were not. In the latter group, the desire for future children did not change. They were more likely to procreate sooner than men in the first group. The men that accepted paid paternity leave were 7 to 15 percent less likely to have another child.

The study’s authors note that paternity leave helps level the playing field in the labor market. Women are more likely to be hired and promoted when employers are ensured they’re going to return after childbirth. This was, in fact, one of the motivations behind the legislation in the first place.

Previous research in Spain from 2002-2003 found that women spent an average of 4.2 hours every day engaged in unpaid childcare labor. For men, that number was 1.3 hours. In such a structure, it shouldn’t be surprising that men desired more children, even if the country is an outlier in that regard. 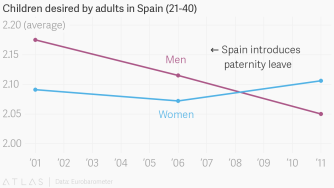 With paternity leave, the distribution of duties evened out. The authors note that men learned about the many costs associated with raising children, in terms of both money and time, which shifted their outlook of the future. They also write that men became focused on childcare quality over child quantity.

Or maybe men just realized how hard raising a child is.

In any case, we can’t extrapolate too much from one study. It has long been pointed out that men are biologically motivated to bear as many children as possible (with as many women as possible) while women are generally the caretakers. Yet biology and culture have been in conflict for a long time. The family unit is one of the most profound examples of this dichotomy between genetic urges and social constructions.

This study highlights another essential component of our species: empathy. It’s one thing to feel for someone else; quite another to live in their shoes. The latter always produces more empathic humans. As women gain prominence in the global workforce, the sharing of duties between sexes is becoming more equitable — in the office, yes, but also in the nursery. For the health of children and society, this is a positive step forward.

Nikolaas Tinbergen’s concept of “supernormal stimulus” explains why humans are attracted to a heightened version of reality.

Here’s how to design a work environment that gives control to employees and stimulates open conversation.
▸
with
Todd Rose
Neuropsych

One of the best-known allegorical depictions of love has a rather pessimistic male twin.
The Present

You don’t need to completely automate a job to fundamentally change it.
Up Next
Starts With A Bang

No, This Is Not A Hole In The Universe

There aren’t any holes in the Universe at all. What actually exists is far more interesting.Somewhere, far away, if you believe what you read, there’s a hole in the Universe. […]