Some people can find deep meaning in thin air. It’s a skill that demonstrates the peculiarity of the human brain and its inclination to find patterns in the noise, even when none exist. Albert Einstein put it best when he said:

“As beings of light we are local and non-local, time bound and timeless actuality and possibility.”

Actually, Einstein never said that. In fact, those strung-together buzzwords are categorized as “pseudo-profound bullshit” in the psychological literature. Here are a few more examples mixed in with some real quotes. See whether you can tell which is bullshit. (The answers are listed at the bottom of the article.) 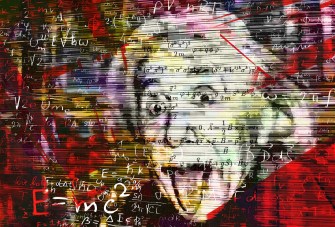 In recent years, psychologists have been studying how and why people react to pseudo-profound bullshit. Most research has focused on the personality traits, political orientation and thinking styles of people who are likely to think quotes like this are profound. For example, studies have shown that openness to pseudo‐profound bullshit is associated with:

But until recently, no studies had explored how people’s interpretation of pseudo-profound bullshit changes based on the context in which the quotes are presented.

In a recent study published in Applied Cognitive Psychology, researchers Vukašin Gligorić and Ana Vilotijević asked participants to rate the profundity of meaningful, bullshit, and mundane quotes. (The mundane quotes were included to make sure people weren’t rating every statement to be profound; example: “Newborn babies require constant attention.”) Participants were shown these types of quotes in three different contexts: isolated, attributed to a famous author, and as part of a short story. 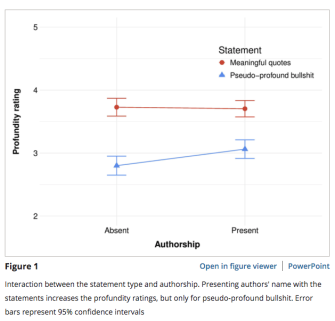 The results showed people tended to rate bullshit as more profound when the quote was attributed to a famous author or presented as part of a vignette. Why? The researchers suggested that, “after seeing a famous author’s name next to the statement, participants might have been primed by the author’s name and construed the meaning in the statement.”

Whatever the underlying mechanism, the researchers called this phenomenon the “labeling effect,” where merely attributing a statement to a famous person changes the perception. It’s something to watch for, they suggested, especially when it comes to political messaging.

“In conclusion, our results suggest that pseudo‐profound bullshit is susceptible to contextual effects—attributing a statement to a famous person alters its perception. Although it might be only economically exploited (as in the case of New Age leading figures), other kinds of bullshit (for example, political), might be more dangerous. Demonstrating how easily people might evaluate pseudo‐profound statements as more profound just because they were presented with an author’s name; we should be aware of potential abuse of this type of effect.”

Or why I’m coming out as an impatient optimist.
Up Next
High Culture

Why are pop songs getting sadder than they used to be?

The use of words related to negative emotions has increased by more than one third.