If you find yourself in an argument about politics, climate change, religion, or any number of conversation topics that are taboo at the Thanksgiving table, you’ve probably silent screamed to yourself, “Why won’t this jerk change their mind? It seems so obvious!” Not only that, but it seems like the crazier position the other side has, the more obstinate they are that you’re wrong, not them.

New research published in Current Biology on December 18, 2018, confirms this feeling: people with radical beliefs actually think differently than those without. Specifically, radicals have less metacognitive sensitivity than moderates.

First, the researchers developed a model of “radicalism.” They distributed a series of validated questionnaires on political orientation, attitudes toward specific political issues, intolerance to opposing views, belief rigidity, and other domains. From these, they developed two factors that explained people’s responses: dogmatism and authoritarianism, which, taken together, were considered to define a radical.

In this study, dogmatism referred to one’s rigidity of belief and intolerance to opposing viewpoints, while authoritarianism referred to one’s adherence to in-group authorities and norms and aggression towards those who did not adhere to those authorities and norms. It’s important to note that people from both ends of the political spectrum could qualify as radicals based on these criteria, although people with rightwing politics tended to be more authoritarian, which replicates previous findings on the subject.

Based on this construct of radicalism, the researchers took a new sample, measured their radicalism, and presented them with a straightforward task. Study participants were shown two squares with flashing dots for about 750 milliseconds. Their job was to pick the square that had more dots. But the purpose of this task wasn’t to see how perceptive participants were. It was to see how confident they were in their answers, how well they could measure their performance — that is, their metacognitive sensitivity. 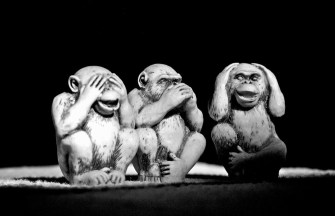 One might think that radicals would be consistently overconfident in their answers, but this wasn’t necessarily the case. Instead, they simply could not track their performance; their confidence ratings failed to match whether they were correct or incorrect. In short, they were less able to observe and analyze their performance because they were less metacognitively sensitive.

To replicate and further test these results, the researchers tweaked the experiment a bit. Just as before, they presented participants with two squares full of flashing dots, one with more dots and one with less, and asked them to select the one with more dots. This time, though, the researchers showed the same set of flashing dots again after an answer had been selected but before the participants rated their confidence.

Being exposed to the dots a second time was new evidence. If the participants could consider and incorporate this evidence, then they would rate their incorrect and correct answers with even less or more confidence than before, respectively.

Again, moderates performed as expected. But radicals? They couldn’t incorporate this new information, at least not when they were wrong. When the new evidence confirmed their answer, radicals rated their confidence in their answer as higher, just like moderates did. When the new evidence showed that they had selected incorrectly, radicals still had higher confidence ratings in their wrong answer than moderates.

Can we become better at metacognition?

“In times of increasing political polarization and entrenchment of opinion, the ability to reflect on our viewpoints may be crucial for a fruitful discourse,” said Max Rollwage — the lead researcher on the study — in an interview with Tonic. “It is not yet clear whether reduced metacognition is the cause or consequence (or both) of radicalization, nevertheless it is easy to imagine that deficits in metacognition will contribute to the consolidation of radical beliefs.”

Fortunately, metacognition is not fixed. It can be exercised like a muscle. In fact, a significant amount of research in education theory deals with how best to teach metacognition to students, as it can improve learning outcomes. It seems that simply being aware of the concept of metacognition can improve one’s metacognitive ability. Meditation, too, has been shown to increase metacognition. If we can improve our ability to reflect on how we think, we might incidentally improve our national and global discussions about politics and policy, become better at recognizing when we’re wrong, and — at the very least — improve conversation over the Thanksgiving table.

There’s Almost No Antimatter In The Universe, And No One Knows Why

The Universe is filled with something, as opposed to nothing, and scientists don’t understand it.When we look around at the Universe:at the planets and stars,at the galaxies and clusters of […]