The way we think about time is somewhat contradictory. On the one hand, time seems to be fixed. You can never go back to the past, and every day, month, and year passes inexorably into the next. On the other hand, we know this isn’t exactly true. There are moments that seem to stretch on into infinity. How long does Thanksgiving dinner feel when your eccentric uncle has had too much to drink? Or, how quickly does a day at the beach go by? The truth is, the brain has a lot to do with how we experience time, and it plies its influence mainly through illusions. Here’s four varieties of temporal illusions that your brain uses to manage the flow of time. 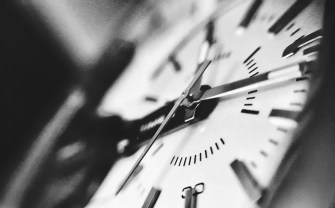 Photo by noor Younis on Unsplash

If you’ve got an analog clock in your house, try to observe what happens when you glance at it for the first time after, say, you were reading a book or watching television. You might notice that the second hand seems to linger for just a moment too long, as though it had been frozen right before you looked up at the clock.

This is known as the stopped-clock illusion, and it’s an example of chronostasis. The reason behind this fairly innocuous illusion is actually an incredible act of coordination between your eyes and your brain.

Whenever we’re focusing on something, like a book in the example above, our eyes are taking in information before we become consciously aware of it. The signal from the light bouncing off the page needs to be sent to the visual cortex before it can be processed and made “real” to us. This is normally going on all the time, so we never really notice it happening.

However, when we shift the focus of our attention by rapidly moving our eyes to a new target — an analog clock, in this case — our visual cortex stops accepting new information. Our eyes are still recording data, but that data is not being processed, and so we do not perceive it consciously. If we were to do so, all we would perceive would be a very blurry and disorienting picture.

To avoid this, the visual cortex shuts down for the brief time we’re moving our eyes and boots back up once the movement has stopped. But you’ve never noticed a blank stretch of time before when you look around the room. Instead, your brain takes the input it immediately receives after the eye movement is complete and fills in the gap after it has occurred. The reason why a clock’s second hand seems to lag when looking at it for the first time is because your brain took a picture of the second hand the moment you observed it and copy-pasted it over those few milliseconds in the past that your visual cortex was not recording, essentially changing your memory of those milliseconds so that you experience smooth, uninterrupted consciousness.

Simply put, the oddball effect is how our sense of time slows down when we’re presented with something that sticks out. Researchers presented participants with some kind of repetitive stimuli with one oddball — for instance, a series of dots with one dot that grew larger in size or a series of repeated tones with one tone that changed pitch — and asked participants to judge the duration of each stimuli. Even though they were all the same length, whichever was the oddball stimulus always seemed longer than the standard stimuli.

Psychologists speculate that the oddball effect is an evolutionary tactic designed to make you pay more attention to things that are novel and stick out. One finding in support of this is that the effect is enhanced when a visual oddball stimulus grows larger, as though it were looming or approaching the viewer. Similarly, the effect is reduced when the oddball stimulus grows smaller, as though it were moving away. The idea here is that our brains are trying to highlight the importance of something new and unfamiliar approaching you, like, say, a charging rhinoceros. A rhinoceros ambling away from you would obviously be less important, so your brain wouldn’t need to pay quite as much attention to it.

3. The force of fear

Different emotional states can have a powerful effect on one’s time perception as well. The best-known case of this is how experiencing fear can seem to slow time down, which is due in part to the oddball effect — these unique situations tend to stick out from our normal lives, and so feel slower.

Numerous anecdotal reports indicate that fearful or intense events, like skydiving or life-or-death situations, can cause the sensation of time to slow. As adrenaline is released into the blood stream, your heart rate goes up; your bronchial passages dilate to absorb more oxygen; your pupils dilate, causing tunnel vision; your blood sugar levels go up; and time seems to slow down.

However, some research suggests that your perception of time isn’t actually slowing down in the moment. Instead, this is a by-product of the extra attention your brain is paying to the fear-inducing situation. You don’t remember normal experiences with this amount of detail, so your brain interprets the high-def nature of a scary memory as though the experience occurred in slow motion.

4. The march of time

We all have heard how the years seem to slip by with increasing speed as we grow older. This phenomenon has been demonstrated empirically. A study asked people in different age groups to estimate when 3 minutes had passed by counting silently in their head. Young folks in their 20s got pretty close to the three-minute mark, but the older the participant, the more the underestimated the passage of time. People in their 60s tended to count to three minutes and 40 seconds instead.

There’s a variety of explanations for this. For one, it could be an effect of proportionality. For a 12-year-old, a year is a very significant chunk of time, but the same can’t be said for a 60-year-old. It could instead be attributed to how our metabolisms slow down as we grow older. A faster metabolism means we experience more biological markers, making for a more vivid and slower subjective experience, with the reverse being true for a slower metabolism. Or, it could be due to the reduction of dopamine — the neurotransmitter responsible for feeling pleasure from novel stimulation — which our brains produce less of as we age. Potentially, it’s a combination of factors such as these.

There are many other examples of the magic tricks our brains can play when it comes to our sensation of time. Although it might feel like a constantly flowing stream, time is really just another way for our brains to make sense of the world, maybe more akin to how what we see if just reflected rays of light and what we touch is just interpreted electrical impulses. So, the next time you’re experiencing a pleasant moment, remember to slow down and savor it.

This scientist collected thousands of secrets. They all had 3 things in common.
▸
7 min
—
with
Michael Slepian
Up Next
High Culture

The secret to Mark Twain’s friendship with Nikola Tesla

Twain and Tesla had similar passions and an amusing friendship.