Silicon Valley is an ultra-competitive environment that comes up with the most exciting technological advancements of our modern life. Understandably, its executives are under constant pressure to deliver something new that will capture and better yet, disrupt, markets. To alleviate the stresses and open their minds, the execs have been known to experiment with microdosing on psychedelics, taking brain-stimulating nootropics, and sleeping in phases. What’s their latest greatest brain hack? Philosophy.

Some philosophers are finding Silicon Valley employment teaching “practical philosophy” that you can use in business and everyday life. Andrew Taggartis one champion of this movement, offering philosophical counseling to tech leaders and anyone in need. The guidance focuses on using reason and logic to unmask illusions about your life or work. You can try philosophical counseling yourself, if you’d like, as Taggart offers Skype conversations.

Taggart rails against what he sees is the “problematization of the world” – the idea that all the obstacles we encounter during our life, from drinking too much coffee to death, are problems in need of solutions to be discovered. He thinks that approach can obscure the true understanding of human life. In an interview with Quartz, he says that rather than ask “How can I be more successful?” it’s actually more important to ask – “Why be successful?”

On the more practical side, Taggert thinks philosophy can also help zero in on what a startup should build and, more generally, he advocates using the philosophical skills of critical inquiry to figure out the “bullshit”.

“Philosophers arrive on the scene at the moment when bullshit can no longer be tolerated,” says Taggart to Quartz. “We articulate that bullshit and stop it from happening. And there’s just a whole lot of bullshit in business today.”

On the other hand, he also thinks that stopping BS is not the chief objective of philosophy. Rather, he warns against the dangers of “total work” – the all-consuming obsession with having to be productive and spend most of our time working rather than contemplating.

“Total work is always on the clock. Ever behind, always in a rush toward, or just behind, an approaching, encroaching deadline. Philosophy occurs when clock time falls away. It seeks to put us in the presence of eternity,“ says Taggart in a blog post.

In fact, he thinks the commitment to “total work” allows the market to control too many aspects of our life. He cites a startup cofounder he interviewed who “asserted unequivocally his view that all human relationships are transactional.” Taggert thinks philosophy can open up this kind of thinking to a less solipsistic view that introduces thought and balance to people’s lives.

Outside of Taggart’s efforts, philosophy has always had a strong presence in Silicon Valley. Another philosopher who has made inroads with the tech crowd is Ryan Holiday, a proponent of stoicism, an ancient Greek school of thought that emphasizes limiting negative emotions and self-control to find the true purpose of one’s life.

Peter Thiel, the legendary venture capitalist behind some of Silicon Valley’s biggest successes like Paypal and Facebook, was a philosophy major in college. He described the importance of philosophy in helping him learn “thinking for yourself”:

“Convention cannot be a shortcut for truth. Silicon Valley is filled with conventional thinking… The future is what they are focused on and people are not sure about it with just a few markers. They will find shortcuts listening to someone else without knowing or figuring it out. The question of thinking for yourself and breaking convention is very important in Silicon Valley and other places.“ 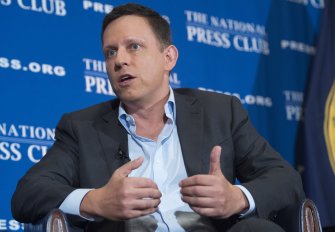 Other Silicon Valley philosopher-execs include Stewart Butterfield, the CEO of Slack, who has two philosophy degrees. Paul Graham, the co-founder of the world’s first Y Combinator, a pioneer of startup funding and development, was also educated in philosophy. Reid Hoffman, the founder of LinkedIn, has a Masters in philosophy from Oxford. Carly Fiorina, former CEO of Hewlett-Packard and a recent Presidential candidate, was a philosophy major (along with medieval history) at Stanford. The founder of Facebook, Mark Zuckerberg, also appears to read philosophical texts and has previously recommended “The Structure of Scientific Revolutions” by the philosopher of science Thomas S. Kuhn to his millions of followers.

Perfectionism is on the rise, and its consequences for mental health can be devastating. The Japanese philosophy of “wabi sabi” can help.
Up Next
Strange Maps

Will your grandchildren live in cities on Antarctica?