Have you ever called someone by the wrong name and they called you out on it, publically? Such an incident can be mortifying. Most of us get over it fairly quickly. But some people have such a fear of embarrassment that it stops them in their tracks. It’s called katagelophobia, and it’s more common than you might think.

People who suffer from katagelophobia may even feel barred from things like pursuing a love interest, the job they really want, or even from seeing a doctor about a medical condition. So how can someone get over such a fear of embarrassment? According to a study out of Carnegie Mellon University, there’s a certain mental exercise you can do to help alleviate symptoms.

Instead of seeing yourself the protagonist in a given situation, picture yourself as an observer. The study found that when one switched their perspective from that of an actor’s point-of-view to that of an audience member, it decreased both self-awareness and emotional discomfort. Those who suffer from high public self-consciousness (PUBSC) could benefit the most, researchers write. PUBSC sufferers feel as though they’re always in the spotlight, which makes them paranoid and highly susceptible to embarrassment.

Psychologists say that humiliation is a very complex, layered emotion. As a “nested” emotion, it’s interwoven within a fear of the loss of dignity and self-esteem. Its complexity makes it difficult to deal with. The key is altering internal mechanisms, which in this case surrounds perspective. 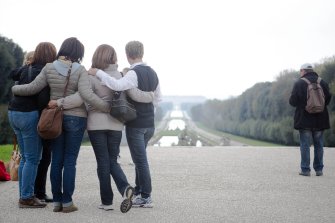 One thing those who are highly self-conscious can do to avoid public embarrassment is to shift their focus, from seeing themselves as the protagonist to just another observer. Friendship – IMG_3604, by: Nicola. Flickr.

Li Jiang was the lead author of this study. She and her team’s findings were published in the journal, Motivation and Emotion. “Embarrassment prevents us from asking advice about what we should do, for example, about our mounting mortgage bills or unplanned pregnancies,” she told Medical News Daily. “In many cases, if we are to help ourselves, and others, we must overcome our fear of embarrassment in social situations.” Jiang and colleagues created an experiment where social embarrassment was a primary feature.

Participants were asked to watch three commercials. In each, the main character suffers some kind of public humiliation. In the first, an attendee farts in the middle of yoga class. In the second, a patient gets identified as waiting for the results of an STD test. In the third, a person farts in front of their love interest.

After viewing the ads, researchers asked participants questions, to find out how they would feel if faced with each situation. They also asked whether each participant identified with the main character or felt more like a casual observer, and to what degree they experienced their point-of-view.

Those who clung to the protagonist’s viewpoint tended to be more self-conscious in social situations, while those who took a spectator’s point-of-view tended to be more comfortable and at ease. From here, Jiang and colleagues say, one can train one’s self to switch their focus from one viewpoint to the other, in order decrease anxiety.

So if you find that you’re nervous in social situations or have a difficult time managing social anxiety, consider the people around you. How are you reading the situation? Are you playing a central role or are you in the background? Consciously becoming aware of when you put yourself in the protagonist’s role and steering your point-of-view back toward the onlooker’s, should reduce your anxiety significantly. These findings have implications for marketing as well.

Embarrassment avoidance forms the basis for attempts to motivate consumers to buy a wide variety of products, from laundry detergents that can resolve rings around someone’s collar, to dishwasher liquid that can remove unsightly spots on dishes. Our research is relevant to those situations in which marketers want to inoculate consumers against a fear of embarrassment and encourage them to take actions they might otherwise avoid.

For more tips on getting over social awkwardness or anxiety, click here.

Why we’re making some calls on National Siblings Day

Though conventional wisdom suggests that birth order influences personality, newer research says this isn’t true. What is true is how powerful an effort to remain close to our brothers and sisters as we grow up can be.