One million dollars has always been a mark of monetary success and, despite inflation, it remains the magic number of wealth. It’s a goal that many people have, and although only some will get there, becoming a millionaire is not out of grasp for the ordinary person. The steps to getting there take hard work, investing and time—a whole lot of it for people who make an average salary.

There is no secret to wealth creation and no quick scheme that is going to make you a millionaire overnight. These are the methods and principles someone has to commit to if they’re to reach this lofty goal. It starts with having a plan.

A handy chart for saving and investing 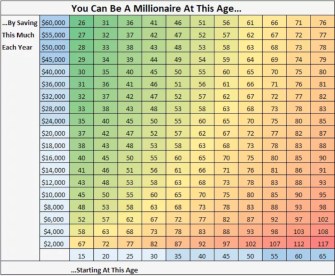 What age will you be a millionaire? Here’s how much you have to put away. (Credit: Four Pillar Freedom)

Making and saving one million dollars in one shot is pretty unlikely. This chart is a great example of how saving in smaller increments over the years can begin to add up fast.

The grid, created by personal finance blogger Zach at Four Pillar Freedom, shows when you can become a millionaire based on annual savings and the age you start to save. It also assumes that you’re starting out with $0 saved and all savings are invested at a 7% annual interest rate.

The numbers on the bottom of the chart are the starting ages. So for example, if you were to start saving $10,000 every year at 25, you’d have a million dollars by the time you were 55 years old. That’s ten years well before retirement age.

This is doable even with a conservative investment strategy. The S&P 500, which is a stock market index of market capitalizations of the 500 largest companies, is one modest investment strategy that can be used. The average annualized return for the S&P 500 over the past 90 years has been 9.8 percent—well above the suggested rate for this grid plan. Legendary investor Warren Buffett just finished a 10-year bet to see which strategy generates more investment return: an untouched S&P 500 fund, or a team of pro hedge fund investors who invest money for you. Guess which generated more money.

But knowing and doing are two separate things. Once you have a plan, it must be enacted over long spans of time. Habitual savings and investment strategies will eventually make you a millionaire.

It’s time to start thinking in the long term; push aside those carpe diem posters and plan for the future. Common savings adages have been around since money was invented, but that doesn’t mean we always listen. Thomas J. Stanley who wrote The Millionaire Next Door: The Surprising Secrets of America’s Wealthy knows a thing or two about building wealth.

One of those methods for building wealth is changing your mindset. Not only thinking about savings long-term but spending as well. Stanley, reiterating common fiscal wisdom, states:

“Most experts on wealth agree that the earlier one starts investing one’s income, the greater the opportunity to accumulate wealth.”

The best time to start was yesterday, the next best time is today. 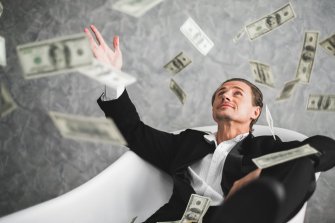 Throw your money around. It’s fun. Then swiftly pick it all up and invest it wisely. (Credit: Shutterstock)

The long-term accumulation of expenses are usually the hidden factors stopping you from becoming well-off, let alone a millionaire. Take, for example, the cost of spending $100 or so every month on going out for coffee. A common reaction is to think that it’s only $100. Let’s apply the same type of compounding we did with the savings, but this time for expenses.

For simplicity’s sake, $100 per month turns into $1,200 per year. In a decade that’s $12,000, just by splurging on some coffee every month, which is pretty innocuous and common. Most people are also using credit cards with high interest rates and living above their means—to have a savings account means digging oneself out of that mess first.

Frugality plus savings is the way to wealth

Long-term thinking naturally leads to becoming more frugal. In Thomas J. Stanley’s inquiry into building wealth, he comes across another fundamental principle: living well below your means. In his book, he writes:

“Twenty years ago we began studying how people became wealthy. Initially, we did it just as you might imagine, by surveying people in so-called upscale neighborhoods across the country. In time, we discovered something odd. Many people who live in expensive homes and drive luxury cars do not actually have much wealth. Then we discovered something even odder: Many people who have a great deal of wealth do not even live in upscale neighborhoods.”

Self-made millionaire Grant Sabatier, the founder of Millennial Money, points to figures in a 2017 Bureau of Labor Statistics report to show that the three biggest expenditures for the average American are rent, food, and transport. A report published by the Joint Center for Housing Studies of Harvard University found that 33% of American households are paying more rent than they can reasonably afford. The generally accepted rent affordability rule is that you should limit your rental costs to 30% or less of your gross income. This rent calculator lets you plug in your income and shows you three options; if you can get your rent down to 20-25% of your income, that’s extra money to invest into an early retirement.

Nowhere is housing savings more evident than with Warren Buffett who, despite being one of the richest men in the world, still lives in a house he bought for $31,500 in 1958. He also once treated Bill Gates to lunch at McDonald’s and paid using coupons.

Throughout the years Buffet has never shied away from giving great advice to would-be millionaires. If there’s one thing he embodies it’s the fact that he has a plan, invests for a long time and still lives below his means. 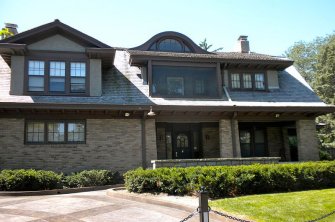 A person with temperament and patience can become a millionaire. The change in mindset won’t come overnight. There are going to be a lot of variables along the way, but, if you can curb your spending and up your savings, you’ve taken the first step to retiring earlier. Use these simple methods as a fundamental guide on your journey to the millions.

If you have some business smarts already and want to launch a real money maker, do what social entrepreneur Miki Agrawal did and ask yourself this key question: “What sucks in my world?”

On Monday, a relatively small South Korean cryptocurrency exchange revealed hackers had made off with about $37 million in coins, spooking markets worldwide.