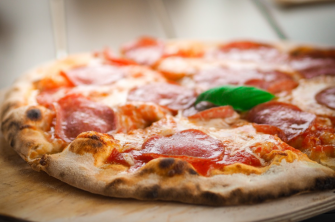 — Pizza has its origins in southern Italy around the year 997 A.D. As tomatoes wouldn’t reach Italy until 500 years later, the pizza of that era was much more like a focaccia bread than what we know today. Pizza similar to today’s pizza happened soon after the tomato was introduced to Italy, around 1530. Pizza didn’t make its way over to America until Lombardi’s opened in Manhattan’s Lower East Side in 1903 (and it’s still open today). Pizza was predominantly an Italian immigrant staple for nearly 40 years until pizza’s popularity exploded after WW2 when GI’s came back from Europe requesting it.

— The world’s biggest pizza (so far) was actually gluten-free. In 2012, a 131ft wide pizza was made by a guy named Dovilio Nardi who runs a gluten-free pizza chain in Italy. It weighed 51,257lbs. Five chefs cooked the dough over a 48 hour period in about 5,000 separate batches.

— What day are the most pizzas sold in America? In 2016, Halloween surpassed Super Bowl Sunday as the single highest-volume pizza sales day of the year.

— Americans eat about 350 slices of pizza per second.

— The largest deliverable pizza is made by Big Mamas & Papas Pizza in Los Angeles, CA. It feeds about 50 to 70 people and requires a specially outfitted SmartCar™ to deliver it, strapped to the roof. (Funnily enough, your correspondent here used to work for BM&P several years ago and has delivered one of those pizzas before!) 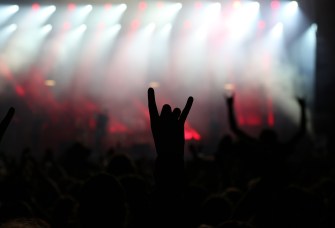 — The Big Bang, i.e. the event that created the universe, was actually quieter than a Motörhead (massively popular heavy metal band) concert. The Big Bang was estimated to be about 120 decibels, while Motörhead played regularly at 130 decibels. British band My Bloody Valentine have surpassed that and are said to be the loudest band in the world, but the defacto record for the loudest band doesn’t actually exist anymore because the Guinness Book of World Records has said they don’t want to actively encourage hearing loss.

— While the exact origins of heavy metal music are under debate, there’s no denying Black Sabbath were the band to bring it to the mainstream. Starting off as a blues outfit called the Polka Tuck Blues Band, they eventually morphed into a psychedelic rock band with a key difference being that they were slower and heavier and more blues orientated. The reason? Black Sabbath guitarist Tommy Iommi lost two fingers in a work-related accident as a teenager (on the last day of the job, no less). After the accident, a friend at the job played him an album by virtuoso jazz guitarist Django Reinhardt — who had lost three fingers in a fire. This inspired Tommy to develop his own sound.

— The metal band Hatebeak is fronted by a parrot named Waldo. They’ve put out 4 albums, the last of which, The Number of the Beak, was released in 2015.

— The heaviest metal in the real world is actual osmium, which is a metal twice as heavy as lead.

— In 1990, the band Judas Priest was sued by parents of teenagers who had killed themselves after (it is alleged) listening to Judas Priest’s music. The parents insisted that there were subliminal messages in the music, specifically “let’s be dead!” and “do it!”. Judas Priest won the case after their manager, Bill Curbishley, cleverly defended the band in court, saying that if they had included subliminal messages they certainly wouldn’t kill off their own fans — rather, they’d encourage the fans to “buy seven [more] records”. 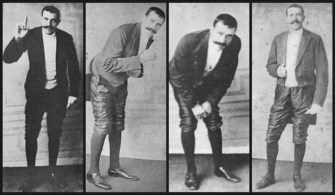 — One of history’s worst farters? Hitler. According to medical documents recently sold at auction, he took 28 different drugs to fight his farting problem. One of the pills he took to battle his führer farts was based on strychnine, which it is thought by some to have led to an early onset of dementia.

— Farting used to be a full-time job. In the 1900s, flatulists (really) would perform in concert halls to packed audiences. The biggest draws were flatulists who could do animal impressions, like French performer Le Pétomane (pictured above. Oh, and his real name… and I swear we’re not joking… was Joseph Pujol). Pétomane would regularly pack Moulin Rouge at the turn of the 20th century. King Henry II of England had a man on his payroll named Roland The Farter who was given 30 acres of land and Hemingstone Manor, a large house which still stands in Suffolk, England, for his abilities. Mandated under this arrangement, however, was that he perform every Christmas.

— The average person farts about 14 times a day, about half of which happen during sleep. This adds up to about half a liter of gas per person per day (or roughly enough to fill a regular size birthday balloon). They travel about 7mph, or roughly as fast as the average adult jogging speed.

— According to American astronomer Derrick Pitts of The Franklin Institute, farting in space can have the possibility to be deadly. Without gravity, warm air doesn’t rise and cool air doesn’t sink, causing a fart to linger exactly where it is. Without proper ventilation, and if for whatever reason you didn’t move, the carbon dioxide and the methane in a big enough series of farts could potentially (and we do stress potentially) kill you.