Those of us concerned with the idea of the quality of life must occasionally ask ourselves what lives are worth living. While we usually only have to ask this when making our own life choices, the question becomes very difficult when we start talking about keeping someone alive with expensive medical care.

Most often, the subject of this question is an aged and ill loved one who would only suffer if they were to be kept alive. More rarely and heartbreakingly, we must ask ourselves if keeping an extraordinarily sick or impaired child alive is worth it. Such a tragic topic is one that we don’t even like to think about. However, as in the recent case of Charlie Gard, it is an issue that does crop up and one that demands we make a choice. This is precisely the kind of difficult decision that ethics is supposed to help us make.

Philosophy has tried to address the issue and has, characteristically, come up with dozens of different solutions. Aristotle, whose views on life were never equalitarian, outright encouraged death by exposure for disabled children. Philo, a Jewish philosopher living in Roman Alexandria, argued against the practice.

Arthur Schopenhauer mused in the 19th century that most people would be better off not existing but argued against conception rather than for infanticide. More recently Peter Singer, an Australian utilitarian, has argued in favor of the option of euthanasia for babies with severe disabilities. A stance which has generated much controversy.

There is a newer idea, however. This one is a little more nuanced.

Threshold theory, as described by Dominic Wilkinson of Oxford, is designed to take into account the uncertainty, difficulty, and social aspects of such a tragic situation. It is based mainly around the idea of a “life worth living.”

A “life worth living” (LWL) is typically defined as one which has more pleasure than pain in it but can also be viewed in terms of more abstract “benefits” and “burdens.” A “life not worth living” (LNWL) is one where the pain experienced outweighs the benefits incurred by living.

Many of the older theories listed above assume that all lives are firmly above or below a line designating the break-even point of well-being and decide if the person in question should live or be allowed to die on that fact alone.

What makes the threshold theory both more nuanced and more controversial is that it includes more variables and holds that there may be cases where it is permissible to take an infant whose life might be worth living off life support and allow them to die.

This theory works by introducing a second cutoff slightly above the ‘Zero-Point’ where the net-benefits of life are equal to the burdens suffered. In graph form it looks like this: 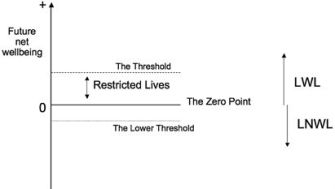 The Threshold concept in a generalized form. (2011 Taylor & Francis)

Every newborn would fall into one of three categories. They can be:

Above “The Threshold” where their estimated future well-being is high enough to make continuing life support a moral duty. The location of this threshold is debatable, but Wilkinson notes that all “moderate impairments” would be above it.

Below “The Lower Threshold” where their estimated future well-being is negative. In these cases, it would be morally obligatory to withdraw life support as to allow the person to continue living is to force them to endure a life of pain.

In the “Restricted Lives” category between the Zero Point and “The Threshold” where life support can either be continued or withdrawn on a case by case basis even though their predicted well-being positive.

While other theories have only the single “Zero Point” line and make no reference to a “Restricted Lives” section, threshold theory allows us to examine other factors which might be important. These factors include the burden on others, practical matters, and uncertainty issues.

First of all, the question of how others are affected by such situations is considered here in a way that other systems never bother with, as Wilkinson explains:

One reason why we may be permitted to withdraw life support in the hypothetical Harmless Case is because of the burden of care. Individuals with severe impairment often need substantial support throughout their lives. Their care usually falls upon immediate family, often involving physical, financial and emotional burdens. There are well-documented potential costs for families in psychological and physical illness as well as marital discord and breakup. The care of individuals with severe impairments also imposes significant costs on society. Their education and health needs are substantially greater than for children and adults without such impairments.

On the Zero Line View, there is no scope for taking such factors into account except insofar as they determine whether or not the child will have an LWL. But in practice, there is a recognition that the interests of parents and siblings should be given some weight. Most pediatric and neonatal intensivists appear to incorporate family interests into decision making. Yet if parental or family interests are to have any role in decisions about withdrawal of treatment, this would necessarily support the Threshold View.

Wilkinson briefly discusses the idea that a life worth living would also include certain features that a severe congenital disability might prohibit, like being able to communicate with other human beings. However, a person might lack the ability to do these things while still living a net-positive benefits life. While he leaves this area largely unexplored, he does explain that this should also be a consideration:

Where a critically ill newborn infant is predicted to have severe and irremediable impairment, such that they will not be able to take part in and realize many of the good features of life, it is permissible for parents and doctors either to allow them to die or to continue treatment. This may be the case even if it is likely that the child would have some overall benefit from life.

Wilkinson also argues that the Threshold system better accounts for uncertainty in cases where the estimated well-being is close to zero than other systems do by having a range where that uncertainty can be considered as a factor in the decision of the parents to either continue or withdraw life support.

Objections? There have to be objections to this.

Several objections come to mind immediately. Not the least of which is the seeming arbitrariness of where the upper threshold would be. Wilkinson admits this objection has merit but counters that amount of uncertainty in making decisions of this nature makes other solutions little better. He seems to prefer to err on the side of least suffering.

Perhaps most seriously, and the subject of the most protests against thinkers who hold these views, is the idea that such theories are inherently ableist or purposely discriminatory against people with disabilities. Giving weight to this objection is Wilkinson’s own admission that, in practice, his method would lead to more disabled infants being taken off life support than non-disabled ones.

Wilkinson counters this objection by showing his work. He argues that his suggestion is based purely on estimated future well-being and that this criterion can be applied to any person, disabled or not. While this does mean that one group of people, disabled infants, will be more seriously affected than other groups, he suggests this doesn’t constitute wrongful discrimination. Hypothetically, it could also apply to a non-disabled child born into unfortunate circumstances that would dash their hopes of having an LWL.

What are other stances on the subject?

There are other views, of course. Many thinkers argue for the Zero Line view that the Threshold theory critiques. This view, while clearly imperfect, does get around the question of arbitrariness that the location of the threshold struggles with. Though it still holds it as morally sound to allow certain infants to be allowed to die.

There is also the “consistent life ethic” presented by the Catholic church. This stance holds that all life is sacred, abortion is murder, and that we should strive to keep the living alive no matter what the situation. However, Pope Francis did temper this stance during the Charlie Gard case when he preached:

“We should never act with the deliberate intention to end a human life, including the removal of nutrition and hydration. We do, sometimes, however, have to recognize the limitations of what can be done, while always acting humanely in the service of the sick person until the time of natural death occurs.”

Deciding if a life is worth living or not is an often-difficult philosophical exercise. Choosing when to withdraw life support for anybody is a heartbreaking decision. Having to do it for an infant is incredibly difficult to think about. Like all such things, however, we must discuss and analyze why we think the way we do so when the time comes we are better prepared to make difficult decisions.

A child-friendly robot demonstrates human emotions and engages children with autism in responding appropriately. MIT researchers have now developed a type of personalized machine learning that helps robots estimate the engagement and interest of each child during these interactions.