Marijuana is arguably mainstream now, but frequent use has its drawbacks. According to an Australian study, marijuana is detrimental to long-term goal planning. Specifically, it affects episodic memory, which is the motor of episodic foresight, or the ability to time-travel into your future in your head and plan your goals.

The study—available here—compared 57 pot smokers to 57 non-smokers in what the study called an Autobiographical Interview task. Every participant was asked to describe either an experience from their past or a possible scenario for their future based on a cue word. The frequent smokers, who smoked three or more times a week, found it more difficult to imagine future scenarios compared to the less-frequent (twice a week or less) smokers and the non-smoking group.

Is this study indicative of all pot smokers being bad at planning? No. Even one of the co-authors of the study, Kimberly Mercuri of Australian Catholic University, said: “More research is needed to better understand the neurological underpinnings of this observed deficit as well as the exact functional implications of the observed future thinking deficit.” Which is researcher talk for ‘the test checks out but more studies should be done.’ (A cursory Google search revealed this 2015 study with similar findings and perhaps the more alarming reveal that marijuana use directly messes with your hippocampus, i.e. the part of the brain that makes you ‘you’.)

Although, before any hypothetical mom goes and posts this article on their children’s Facebook wall and goes “I toldja so!”, there are absolutely successful stoners out there—here’s a list of 50. And it’s not just the creative arts: one of Big Think’s biggest inspirations, Carl Sagan, was a noted stoner. Also: marijuana is safer than alcohol by a very, very wide margin. Alcohol kills 88,000 people a year while pot has yet to do much more than cause you to eat an entire bag of Doritos in one sitting. 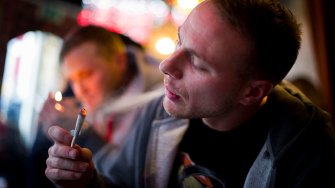 It appears in the study that those who partake in a lil’ toke once or twice a week are off the hook. But for regular “smoke weed e’ryday” smokers? The study hits home the extremely common archetype of the directionless stoner, a look that not even Brad Pitt could make sexy.

It also pops the balloon of delusion—people like Willie Nelson, Seth Rogen, Margo Price, Jay-Z who smoke and are at the top of their game are likely 1% outliers: most daily stoners don’t get shit done. In the wise words of rapper Smooth, “too much of anything makes you an addict.”

A new study shows that U.S. students infected with the Toxoplasma gondii parasite are more likely to be business managers and entrepreneurs.