There’s been lots of talk about the meteoric rise in student loan debt and how it’s affecting borrowers. Millennials especially has been saddled with such debt and we’re now just starting to understand how it’s affecting them. One study out of the University of South Carolina, found that high levels of student debt can lead to greater anxiety and depression rates and poorer physical health.

What’s becoming more apparent is such debt can affect one’s love life, too. Previous reports have looked at how worry over student loan debt can put undue pressure on a marriage. An organization called Student Loan Hero has pulled back to get a wider view. They conducted a survey on how such debt affects a person’s love life.

Student Loan Hero is a consultancy/educational website. Their mission they say is to help Americans better manage their finances, particularly student loan debt. They currently offer a free set of financial tools for managing one’s loans and put out a weekly digest that features tips, strategies, and resources for dealing with them. Their newsletter currently has 150,000 followers. 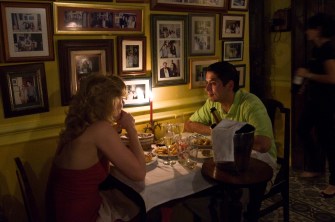 Some couples find it really hard to talk about student loan debt, no matter how close they are. Credit: Getty Images.

Shannon Insler is a writer and researcher for Student Loan Hero. She told me in a recent phone interview, she got the idea from a previous survey they’d conducted, on the mental toll student loans take. “We discovered people were having a lot of physical symptoms,” she said, like headaches and difficulty sleeping. “Then we had a couple of open-ended questions. In some answers we saw people saying it was affecting their love lives. In fact, one person even said they divorced their spouse because of their student loan debt.”

Insler consulted licensed clinical counselor Erin Wiley MA, LPCC, to help craft the questions for this latest survey and analyze the results. Wiley owns a multi-clinician group practice in Northwest Ohio. Her focus is marriage and family counseling. “I think money is a super emotionally-charged issue for couples in lots of ways,” Wiley said, during that same  interview.

Two of the most common things couples fight about are sex and money. Here, 43% of respondents said they fought about money with their partner “somewhat often.” 36% admitted to lying about financial issues. While only 18% said it was okay to lie about money. 24% specifically hid their student loan debt from their partner. “With the amount of shame surrounding debt in our culture,” Insler said, “I guess it isn’t all that surprising.” There were bright spots too. For instance, 55% said they helped their partner make student loan payments.

As for those in the dating scene, a full one-third said they wouldn’t get serious with someone who couldn’t handle their debt. At the same time, 25% said they couldn’t be with someone who had a high amount owed to student loans. On the other end of the spectrum, 72% found the ability to budget an attractive quality in a mate.

“More people are concerned with what you’re doing about it than whether or not you have student loan debt,” Insler said. 20% said a partner having exorbitant debts wouldn’t affect them at all. Still, 29% found someone free of student debt appealing. 53% wanted to date someone with a high credit score, and 40% found someone with a retirement account appealing. 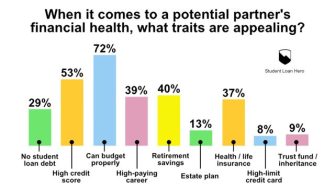 Rather than avoid relationship milestones, the survey showed that young people are delaying them. Just over 25% put off moving in with a partner due to high student loan debt. 35% delayed talk of marriage, and 46% put off starting a family. The survey asked, “How has your sex drive changed due to your student loan debt?” 31% said it depleted their libido. “I found it surprising how many people specifically said that their sex drive was impacted by student loan debt,” Wiley said.

Financial worry is known to be a libido killer, especially among women. With the overwhelming majority of respondents being female, perhaps it’s not such a shock. The counselor also said that many people in our society look at debt as a personal failure. Rather, Wiley suggested, consider it an opportunity to get your life under control. 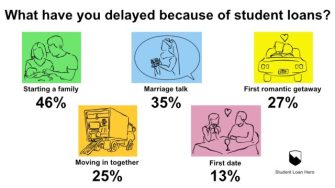 Insler said one of the reasons why she wanted to conduct the survey was to unveil misconceptions about dating and student debt.

Someone might think that they’re student loan debt makes them undateable. On the flip side, you hear stories that someone won’t date someone with student loan debt, and even that people are asking for credit scores on the first date. I found the results of this survey to be encouraging in that, it didn’t seem that having the debt is much of an issue. It’s how somebody handles and explains their debt.

We may be holding ourselves back, thinking this is a deal breaker, when in actuality, it isn’t. Some people on the survey said it keeps them from going on a first date. That’s you saying to yourself, ‘I don’t feel that I can be an attractive partner because of this.’ Or you feel like, ‘I can’t go on to that next stage in life until I have my stuff together.’ But that’s tough, because payment plans go anywhere from 10-30 years. That’s a long time to put your life on hold.

So what should you do if you’re single and have substantial student loan debt? For most people, what’s important is to finding someone who handles their debt well. Be honest about it. Understand all aspects of your debt. Make a reasonable plan to pay it off, one you can stick to. Build up a reliable track record of payments. If you aren’t sure where to begin, call your school’s financial aid counselor or your lender’s customer service line. Or sit down with a financial adviser, or a close friend or relative who’s good with money. And don’t do it for your love life, do it for yourself.

To learn how student loan debt grew into such a big problem in the first place, click here:

Albert Einstein played a mean violin.
Up Next
Mind & Brain

A Lack of Dreaming Might Cause Health Problems. Here’s What You Can Do.

It’s not only a lack of sleep that’s hurting us. A lack of dreaming might point to health problems.