The AR-15 was called by the NRA “the most popular rifle in America.” It is produced by Colt, and according to NRA estimates, Americans currently own more than 8 million AR-15s.

The NRA claims that the rifle is popular because it is very customizable, as well as “reliable and accurate” and can be adapted to a wide variety of uses, like hunting, shooting and “self-defense situations.” The NRA also tries to debunk what it calls a “myth” and offers reasons for why the AR-15 is different enough from a military weapon, including the inability to hold the trigger for rapid fire and the workings of its internal mechanisms.

Of course, this claim is somewhat contradicted by the gun’s manufacturers like Yankee Hill Machine, whose media official and graphic designer Daniel Bogdan recently admitted in an interview that, ultimately, the AR-15 fires more shots quickly, which is what makes it such an effective mass killing weapon.

“I think a gun’s a gun,” said Bogdan. “It could be a pistol, it could be an AR-15. Maybe you can fire more rounds with an AR-15 versus just a pistol,” but “AR-15s shouldn’t technically be criticized more than any other gun.”

Well, let’s see if AR-15s really are no different. Here are 5 reasons to ban these types of guns:

1. The worst mass shootings are done with AR-15s.

The AR-15 was used in most of the worst mass shootings in recent United States history.In the 2017 Las Vegas shooting, the gunman had 14 AR-15s, killing 58 people and injuring 851. The Bushmaster XM15 rifle with similar functionality and look to the AR-15 was used at the Sandy Hook shooting in Newtown, Connecticut (20 kids, 6 adults killed). The AR-15 was also used in the 2015 San Bernadino attack that left 14 dead and 22 seriously injured. 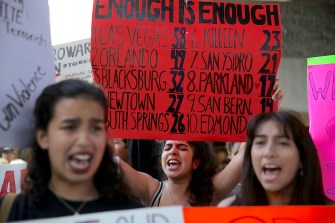 People join together after a school shooting that killed 17 to protest against guns on the steps of the Broward County Federal courthouse on February 17, 2018 in Fort Lauderdale, Florida. (Photo by Joe Raedle/Getty Images)

In the 2017 Sutherland Springs Texas church massacre, where 25 people were murdered and 20 wounded, the shooter used a Ruger AR-556, described by a gun seller as “an AR-15 on a budget”.

Now, on February 14th, the gunman in the Parkland, Florida high school shooting used the AR-15 to take the lives of 17 people, including 14 students, while injuring 14.

The 2016 massacre of 49 in Orlando, Florida was carried out with a Sig Sauer MCX, a semi-automatic rifle that looks similar to the AR-15, but different from it on the inside.A fact that leads to another obvious question – if it’s not just the AR-15, should we not be talking about regular citizens having no need for any such weapons?

2. The AR-15 is essentially a military weapon.

The AR-15 is a semi-automatic version of the fully automatic M16 rifle used by the U.S. military. It is identical in external appearance to the military weapon. The M16, in turn, was developed for use during the Vietnam War, as an answer to the Viet Cong’s AK-47s. Yes, a gun that became the standard weapon used by American soldiers to fight in Vietnam has been coming to a schoolyard near you. 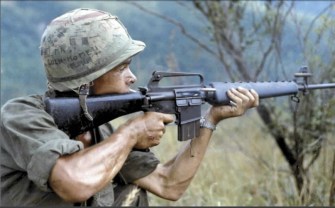 Due to its mechanics, the AR-15 or similar rifles can not only shoot more bullets, it can cause much more damage to human tissue than a regular handgun. The speed at which projectiles (bullets) leave the AR-15 are much faster out of the muzzle, reports NBC News. Such projectiles are also more likely to break apart in the body, leaving more fragments and damage.

“The higher muzzle-velocity projectiles, if they strike an organ, you’re more likely to have severe injury and bleeding and dying than with lower muzzle-velocity munitions,” explained Donald Jenkins, a trauma surgeon at the University of Texas Health Science Center.

What’s also special about the AR-15 is that its regular magazine can hold 30 bullets. And in most states, this number can be significantly bumped up by adding high-capacity magazines that contain more rounds. The Parkland, Florida shooter had multiple such magazines.

And if that’s not enough, the AR-15 can also be easily modified to shoot continuously, with available conversion devices.

3. “AR-15 is not for hunting, it’s for killing,”said Florida Senator Bill Nelson (D) in an interview on Fox News Channel’s “Fox & Friends.” While the rifle maker disputes this by saying that it’s not the gun but how you use it, one wonders how far that logic really goes.

It’s hard not to see how the ability to shoot and kill more things in a shorter period of time makes this kind of gun specifically suited for killing. And if we extend the notion that in this version of a “free” society, people should be completely able to do what they want as long as they choose to accept the consequences, let’s just a put a nuke out there while we’re at it and rely on the good will and sharp skills of the majority of citizens to keep us completely safe. We wouldn’t do that, and we should consider what else we shouldn’t do for a version of freedom that the majority of this country doesn’t share. After all, a freedom not to be killed is the most useful freedom.

And if you’re thinking that none of that matters and your right to have fun with a military-style rifle is most important, enjoy this video of an AR-15 enthusiast going after a wild boar:

4. Other solutions are not getting implemented.

This is a concrete action that can be taken immediately. Like he banned bump stocks, President Trump can act and ban AR-15s and similar weapons.

We can’t agree on gun control, but maybe we can at least agree to get rid of one kind of gun from public hands as soon as possible. The Marjory Stoneman Douglas shooter was a 19-year-old man who was expelled from his high school for fighting, exhibited clear mental health issues, was reported dozens of times to the local and federal law enforcement authorities with the specific warnings that he might shoot up a school, and still he was able to legally purchasean AR-15. We don’t have a good enough system set up to stop someone him, so it’s reasonable to stop selling a dangerous weapon to avoid more casualties. 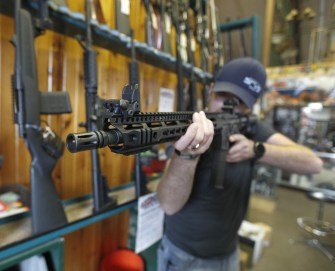 Dordon Brack aims a semi-automatic AR-15 that is for sale at Good Guys Guns & Range on February 15, 2018 in Orem, Utah. (Photo by George Frey/Getty Images)

Other important issues brought up by this discussion, that relate to mental health improvement or video games, are cultural phenomena that may or may not be ever resolved because just maybe these are the kinds of people we are. Certainly, one questions if the current administration is not using cultural baiting simply as an excuse for inaction and to shore up its base, which surely includes the 3% of all Americans who own more than half the country’s guns.

Interestingly, blaming video games is also an excuse that falls apart easily from this same gun. AR-15s regularly appears in video games, like the popular Call of Duty series. So if you think the kids are getting ideas about shooting people from video games, you may be right – in fact, the games may specifically tell them which gun to use.

As the violent video games debate shows, there are serious and often hard-to-answer questions here if you are trying to blame the whole culture and want to fix everything (except having less guns). To start with, let’s improve school safety and focus on getting rid of these kinds of guns so fewer of our fellow citizens, somebody’s loving mothers, fathers, and children, will get shot.

As the students who survived the Marjory Stoneman Douglas High School massacre watched on, Florida’s Republican-controlled House of Representatives voted 71-36 to reject even considering a ban on assault weapons like the AR-15. What’s more, on that same day, they passed a measure calling pornography a public health risk.

That pretty much tells you all you need to know as far as who is running the Florida legislature. There has definitely been a flurry of recent cases where pornography killed young people in horrific massacres while they were in the supposed safety of their place of learning. No, no such thing ever happened. That’s fake news. Assault weapons like the AR-15 are what kills people.

Limited Offer: Join Me On An All-Inclusive AstroTour Of Iceland!

Okay, this is an incredible and rare opportunity, but I’m so pleased to announce that next January, from the 18th-24th, 2019, I’ll be leading an exclusive AstroTour of Iceland!We’ll hit […]