“This machine kills fascists,” read the handwritten scrawl taped to Woody Guthrie’s guitar. It was Depression-era testament to the link between two common passions: politics and music. Our feelings about them say something about how we view our world. But is there a one-to-one correspondence between them? Do people with one kind of politics prefer a particular form of music? Ticketing company TickPick decided to find out by surveying 1,007 music fans through Amazon’s Mechanical Turk. Here’s what it found.

Whether you’re a Democrat, Republican, or Independent, the top two genres are classic rock and then pop. This is heartening—some things we do agree on. Going down the list there are differences, sure, but still… 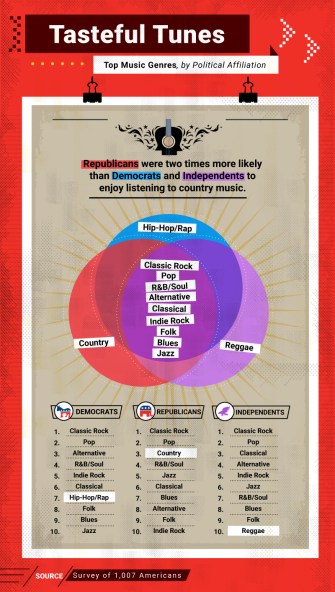 It turns out that regardless of party affiliation, all of the respondents liked pretty much the same artists. 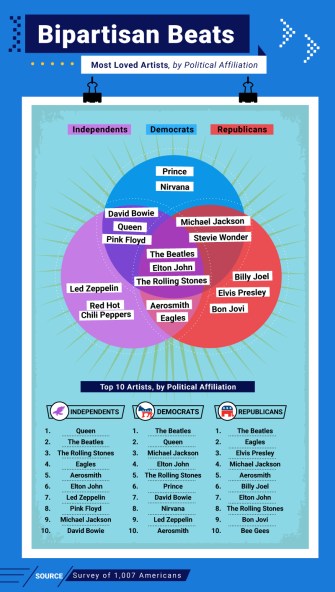 Well, so much for our Kumbaya moment. When it comes to how we feel about specific issues—and the president—our music tastes are no longer in harmony. In general, it seems like people will be clustered to either side of our national dance floor, with far more of them on the side that favors pot legalization, gun control, same-sex marriage, and no border wall.

To Trump or not to Trump

KISS or Beyoncé? They’re the #2 artists on both sides of this question, with recent events casting doubt on #1 as shown. 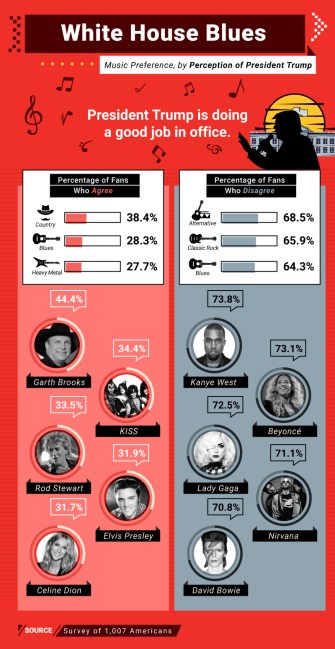 Or should this be White House Reds?

As you can see, when the survey was taken, Trump supporters preferred Garth Brooks, and opponents picked Kanye. Since then, Kanye has announced his support for Trump, so his position may have swapped columns. We demand a recount! (Or maybe the results have been tampered with.) This is why the #2 winners may be more accurate. At least this week.

It’s totally plausible that Taylor Swift fans don’t want to see pot made legal while Nirvana fans do. Got it. But we’re skeptical about Justin Bieber’s current fans. Sure, when he was a tween idol, but now? Cough. 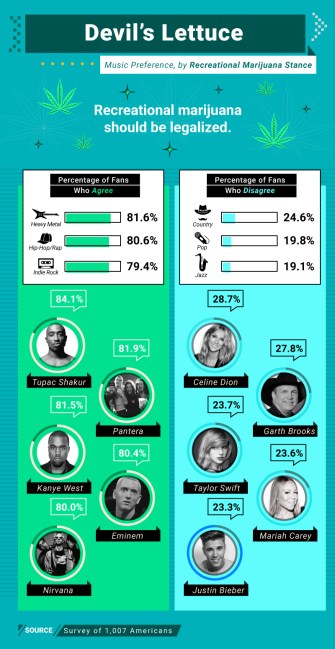 Gun control. Ow. This topic exhibits a real cultural divide, with all pop artists for those seeking tighter gun laws, and those against into country, rock, and… Frank Sinatra? (Also, not to make trouble, but three out of five pro-gun control favorites are people of color, while every single anti-gun-control favorite is white.) 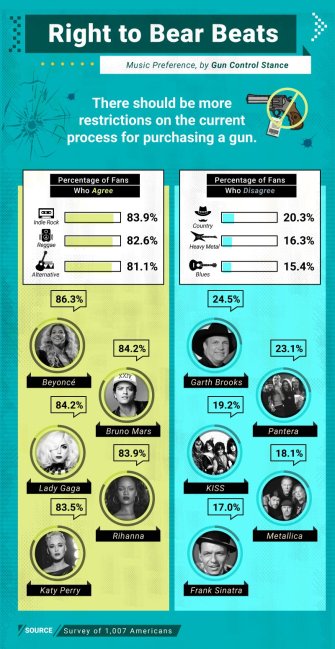 This breakdown is remarkably similar to the preferences of the pro-and anti-legalization people. Weird. Culture war much? (A little bit surprised about Celine Dion fans.) 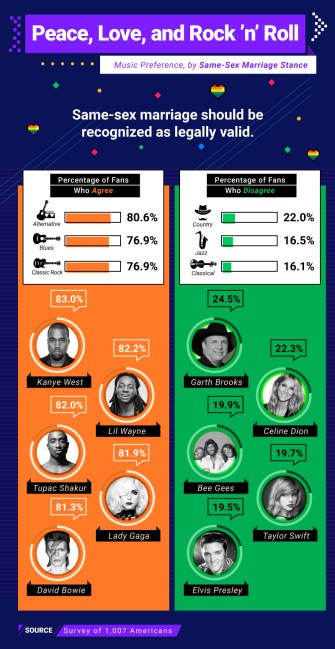 Okay, now we really think the music culture wars are real. Surprise in the pro-wall camp: The Bee Gees. Fortunately, the wall still allows immigrants from the Isle of Man.

Yeah, we’re a fractious bunch, having little in common other than rock oldies and Top 40. Our diversity is our strength, though, right? Just leave that radio station where it is, please.