Governor Jerry Brown has pushed to eliminate bail bonds since 1979, and it appears that he got his wishes with the signing of SB 10, the California Money Bail Reform Act. It is supposed to end the cash bail system in the state of California—a discriminatory system that favors the wealthy— replacing it with release based on a risk assessment and in some cases under supervised conditions (such as ankle bracelet monitoring or frequent check-ins). Or, in other cases, the accused will be held until trial. This is all dependent on an algorithm by jurisdiction—and we know that algorithms can have a huge problem with bias. 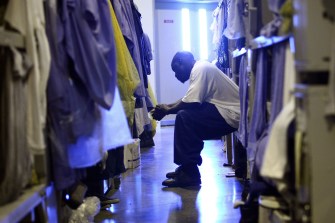 An inmate at the Mule Creek State Prison sits on his bunk bed in a gymnasium that was modified to house prisoners August 28, 2007 in Ione, California. (Photo by Justin Sullivan/Getty Images)

“A person’s checking account balance should never determine how they are treated under the law,” California Lt. Gov. Gavin Newsom (D) said in a statement. “Cash bail criminalizes poverty, and with Gov. Brown’s signature today, California has opened the door to pursue and perfect a just pretrial system.”

There are critics, however, such as the California American Civil Liberties Union, which withdrew its support when the legislation changed too much from its original intent. That intent was to make it possible for those without a lot of cash on hand to still be able to be released awaiting trial; as it is now in most of the country, coming up with $5,0000 to $50,000 to get out of jail and eventually go to trial is impossible for all but the wealthy. It also creates a predatory system of bail bond companies that make a huge profit off of those who don’t have the cash to post bail. 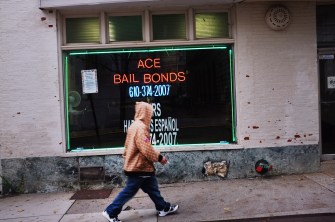 A man walks by a bail bonds store on October 20, 2011 in Reading, Pennsylvania. Reading, a city that once boasted numerous industries and the nation’s largest railroad company, has recently been named America’s poorest city with residents over 65,000. (Photo by Spencer Platt/Getty Images)

The problem with the new law, critics say, is that it leaves open to interpretation by judges the cases in which accused criminals are held without bail and not released. In other words, they can decide on their own if someone is a public safety or flight risk, thereby denying bail or making the conditions of release nearly impossible. This leaves in place the chance of racial and other discrimination when someone comes before those judges; it’s all decided by jurisdiction and judges, with a little history of the given defendant thrown in. And, of course, the criminal justice system all over the United States contains inherent, deep racial biases.

In other words, the intent of the law doesn’t really match up with what was signed.

Still, some of the organizations and people who did sign on to support the bill are confident it’s a step in the right direction.

“Wealth is not the measure of any woman or man. By eliminating cash bail, we are saying that those with the least ability to pay should not be released or incarcerated solely on the basis of their wealth or poverty. SB 10 is only one leg of the long journey toward perfecting our justice system, but it is an important one,” said Assembly Speaker Anthony Rendon, who signed on to the bill.

The president of another of the law’s supporters, NextGen America’sTom Steyer, agreed.

“Today, California made history by ending money bail and took a significant step towards amending the injustice at the heart of our criminal justice system. For decades, the money bail system has created a two-tiered system that prioritizes profit and penalizes poverty, and has been especially detrimental for communities of color. In America, your bank account must not determine your access to justice, and passing SB 10 is an important step towards creating a criminal justice system that is more just and equitable.”

The era of cheap energy is coming to an end and societies will need to reshape energy consumption and infrastructure or face consequences, warns a new scientific background paper issued to the United Nations.